Sex columnist and Art Star performer Rev. Jen Miller recently left the Lower East Side of New York to do a book reading at Book Soup on the Sunset Strip in Hollywood. Her latest book, Live Nude Elf, is a collection of stories she wrote for Nerve.com as their staff sex columnist. Part of the eye-opening reading included her story about holding her own "Key Party," like the 70's swingers in Ang Lee's The Ice Storm. But her party sounds like it was a lot more fun:

The Huffington Post caught up with Rev. Jen after her reading to ask her about the crazy-ass research a sex columnist has to do in the name of science.

What kind of book is called "Live Nude Elf"?

A book about a living elf who is often naked. That being me. It's about my stint as a sex columnist, a job that requires a good deal of pantlessness.

What kind of deranged, perverted sex acts transpire in this book?

Yes. There's more. It's an educational book to some extent.

How does a life dedicated to sexual science experiments jibe with having a relationship?

Depends on the partner. Some are eager to become "literary figures" but most are terrified of having their penises described or even mentioned in print. In the end, I had to choose. I chose trying to have a normal relationship. Big mistake!

What led you to be a sexual Guinea Pig for erotica site Nerve.com?

Nerve needed a fearless sexual explorer who could also write. I needed rent money and have always found that taking my clothes off is a good way to get it.

How does this book compare to your other literary works?

My first book, Sex Symbol for the Insane, deals mainly with the various crap jobs I held in my twenties. It's also hand-bound in hot glue and duct tape and features a faux-fur back cover. It's now a collector's item. You can see it in the Whitney's Library! My second book, Reverend Jen's Really Cool Neighborhood, is a travel guide to the Lower East Side. It was a useful book until about three years ago when all of the cool places described in the book got bulldozed to make way for housing for the rich and overpriced bars for yuppies. But it's still interesting as an historical document. Art Star: The Adventures of an Underachieving Visionary, which I self-published but am now withholding from the world until it can fetch me another book deal, is a memoir dealing with my rise from friendless suburban adolescent to art star. Then there are the coloring books: Beer is Magic, Magical Elf Panties, Being a Supermodel is Cool and so on...

What kind of stories can you share involving famous people?

Not many. Is my agent, Jonathan Ames, famous? Years ago, I threw my panties at him while he was onstage reading from his memoir (ala Tom Jones concert). They knocked him right in the eye. That was kind of the start of our friendship. I also directed a music video for Moby and got him to dress as Anna Wintour. He looks great in a Chanel suit and bobbed wig. But I don't know many famous people. I'm more interested in the art stars who should all really be famous.

What kind of stories can you share involving people who are not famous but desperately wish they were?

How much time do we have? Personally, I've never *wanted* to be famous all that much. I just figure it's inevitable, but then I think, "Okay, any day now, the world will catch up..." Really, I just wanna be able to afford to go to a doctor and buy outfits.

I used to be a size queen, but then I dated someone with a large penis who hated beer and Led Zeppelin. I would much rather date a man with a tiny penis who likes these things. (Though men with tiny penises don't seem to ask me out...) Plus it really is the motion in the ocean. As far as gender goes, I've fooled around with women, but prefer men. I need a little yang to my yin, lingam to my yoni, etc. Check with me next week and I'll probably be dating a woman. I'm very indecisive. Humor is most important. I've dated so many brooding a-holes. Now I just wanna be with someone who makes me laugh.

You can see more of Rev. Jen's work at www.revjen.com 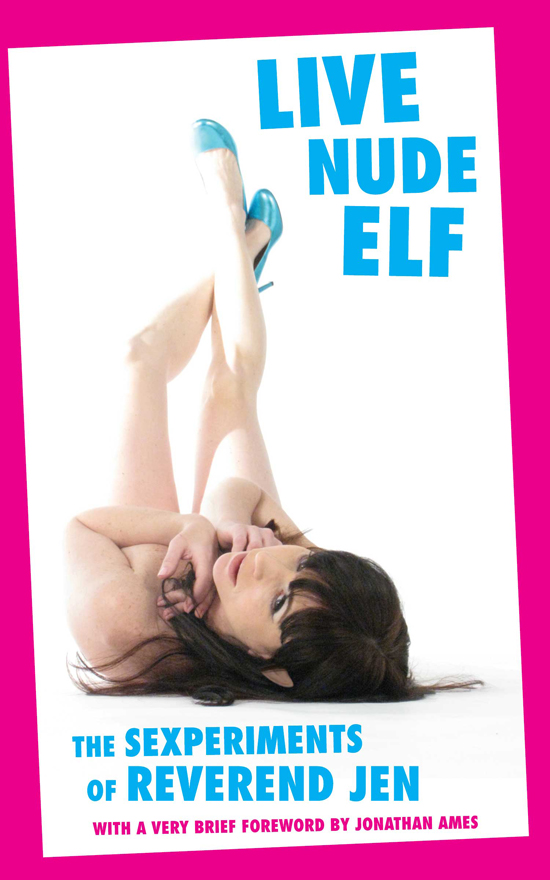