In anticipation of the arrival of my eight-year old, autistic daughter, Emma's iPad, an early Christmas gift from my mother, I began looking for apps, which I thought Emma might like. I bought a number of them to test on my iPad.

So I wasn't surprised when Emma appeared at my side carrying my iPad the other night. "Mommy go to bed?" she asked.

"Yes. You have to ask Mommy. Mommy come to your bed with you?" She pulled on the sleeve of my robe. "Mommy can you come to my bed sit with you?"

"Mommy can I come with me," Emma said, struggling with the ever elusive proper use of pronouns so commonly seen in autistic children.

There are a number of apps Emma likes: Learning Touch First Words is a huge hit, as is iWriteWords and Sound Shaker. We've just begun exploring Montessori Crosswords. Draw has not captured her attention yet, though I love it, but the iPad app, which is her favorite is: Interactive Alphabet -- ABC Flash Cards. She loves the music that plays as she taps on different letters, each letter coming to life as she touches it.

"E. E IS FOR EGG," the female voice said, when Emma tapped on the egg. She tapped again and watched it cracked open, a raw egg splatted down next to the first one.

"Hey Em," I said, "What letter is that?" I asked pointing to the E. Emma said nothing and tapped on the A.

Emma tapped on the picture of the apple and watched as the apple was eaten with accompanying crunching noises.

"What about this letter, Em? What letter is this?" I asked pointing to the B.

Emma ignored me and pressed the B. We continued in this way for a few more letters, with me watching her as she listened to a letter and then when asked what that letter was, she could not answer.

"Press U, Em," I said. Much to my surprise, Emma immediately pressed U.

"Em what letter is that?" I asked, excitement creeping into my voice.

"P. P IS FOR PLANT," the voice intoned, as Emma bopped her head up and down keeping time with the music.

Sure enough, no hesitation, Emma tapped on the letter B.

I repeated this with more than a dozen letters, picked at random with never a hesitation on Emma's part, until I asked her, "What about W. Press W," I said.

Emma held her finger over W and then tapped on V, just to the left of it.

Emma looked at me, smiled and tapped on Q, again the letter just to the left of R. After this had gone on for three or four more times, it was clear Emma was choosing the letter to the left on purpose. Each time she did so, she laughed. It reminded me of all those therapy sessions when I would be called in to discuss Emma's progress. The puzzled therapist would then describe a session with Emma regarding something she thought Emma knew, only to question whether perhaps she didn't.

"So it's a processing issue," Richard said later that night when I described my session with Emma.

"Yes, it's really interesting," I said. "She knows every letter of the alphabet if I ask her to point to it. I think she even knows almost all the sounds they make, but if I ask her to name a letter, she can't."

Of course the implications are exciting. Up to this point I had wondered whether Emma could learn to read or write. I wondered if the wiring in her brain was too jumbled to be able to, just as many autistic children who can read and write, cannot speak. The other night convinced me; reading and writing are achievable goals.

Since then Emma's own iPad arrived. Her early Christmas gift from her Granma is such a favorite, Emma requests it each night before she goes to bed and says, "Emma's iPad?" each morning.

Emma and her iPad 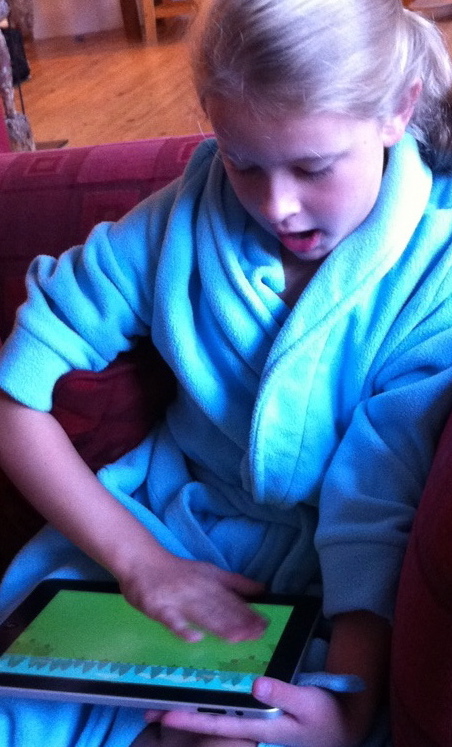