Emma Stone, it turns out, doesn't quite have a knack for creating delicious treats for entitled Hollywood hounds.

Luckily, there was another career path available to her when she packed up, quit high school and moved out west.

Covering this month's Vanity Fair, Stone reveals her early career struggles, which she can now make light of, given her enormous -- and growing -- success.

“I could hear that, in the other room, a girl had just gone in and they were saying, ‘You are our pick … On a scale of 1 to 10 you’re an 11,’” Stone tells the magazine of her audition for the now-cancelled NBC "Heroes." The girl in the room, of course, was Hayden Panettiere.

“I went home and just had this meltdown,” Stone says, labeling the moment her “rock bottom.”

For many, high school graduation is a difficult moment; so used to the comfort of their hometowns, with family and friends all around, they're unable, or at least not ready, to head into the real world. Stone's graduation time, however, was different; hers came on the big screen, in her big breakout role. Having already left behind all the trappings of home, she had no problem with the transition.

Right here, of course, is starring in two huge summer movies: the civil rights-era book-to-film, "The Help," in which she plays a young journalist chronicling the struggles of black maids in the South, and romantic comedy "Crazy, Stupid, Love," in which she finally lassoes a wild Ryan Gosling.

Then, there is of course her coming star turn as Gwen Stacy in the upcoming "Amazing Spider-Man."

For more, including her take on paparazzi and her personal life, click over to Vanity Fair. 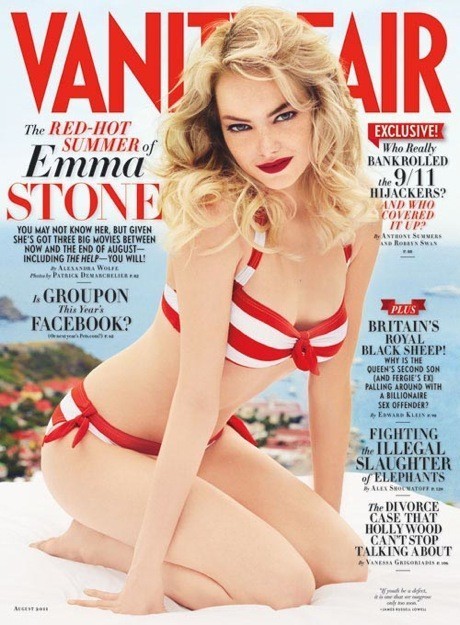