I'm not going to say that In the Loop -- the new British political comedy directed by Armando Iannucci and based on his award-winning BBC sitcom The Thick of It -- is going help put the last eight years of U.S./Great Britain relations into context, but at the very least, I think it provides some bracing insights into how politicians on both sides of the Atlantic fulfill the pressing demands of their jobs. That is to say: Not all that well.

On the G.B. side, you've got, amongst others, a minister (Tom Hollander) whose every encounter with the press seems destined to provoke an 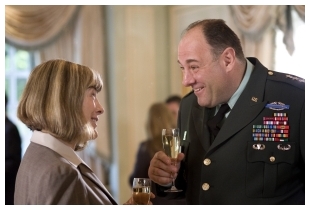 international incident, and a director of communications (the superb Peter Capaldi) who wields his power with such vitriolic zeal that sulfur trails linger when he leaves the room. Here in the good ol' U.S. of A, there's an assistant secretary for diplomacy (Mimi Kennedy) who bristles at her isolation from all the good committees -- you know, the ones that plan wars and stuff -- and a Pentagon General (James Gandolfini) whose instincts for survival are maybe too finely honed.

They all come together over an impending conflict in the Middle East (Iannucci is discreet about which country is actually getting invaded) and a document that, if it ever reached the public, could derail the entire enterprise (said document having been drafted in America, so it's not at all like the Downing Street Memo). In the course of the drum-up to war, there'll be furtive love affairs (between government assistants Chris Addison and Anna Chlumsky), much ego stroking and destruction (Capaldi's official flies all the way to Washington to discover that his exclusive, White House one-on-one is with a deputy assistant secretary who looks like an escapee from High School Musical), considerable jockeying for position, innumerable invocations of the f-word, and a stealth appearance by Steve Coogan (maybe you'll have better luck finding him than I did -- I had to check the production notes to be sure).

In sum, it's political vitriol in the grand, British tradition. Wouldn't have it any other way. (BTW: In the episode, I say the film opened on the 19th. I was looking at some old press materials -- it's actually opening on the 24th.)

Here's my interview with Iannucci: