Ain't love grand? Uh, no, not necessarily, and especially not if you're a character in an independent film, where relationships are far more likely to crash upon the rocky shoals of discord than find a safe harbor in Happily-Ever-Afterland. And I prefer that, really, especially since what passes for mainstream romantic-comedy these days usually turns out to be treacly, contrived, and bearing little resemblance to actual, human behavior. 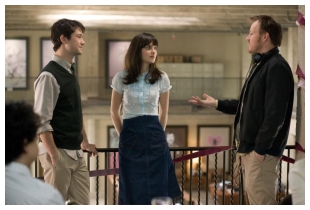 and Zooey Deschanel -- for twenty-first century neo-realism (the dance number set to Hall and Oates' You Make My Dreams Come True will convince you of that). But director Marc Webb (along with scripters Scott Neustadter and Michael Weber) take the latest configuration for screen couples -- he's an incurable romantic; she's, eh, not so much -- and gang it to a fractured time-line, jutting the ecstasy of a relationship a-bloomin' right up against the agony of its dissolution, in order to come up with a narrative that can indulge in comic hyperbole (look, cartoon birdies!) even as it's scoring valid, and all too painful, emotional points.

My conversation with Webb uncovered, amongst other things, a bit of the secret history of L.A. architecture, and how easy it is to stir the chemistry between Gordon-Levitt and Deschanel. Here's the interview:

More MMP on HuffPost:
Armando Iannucci on In the Loop
Lynn Shelton on Humpday
Amat Escalante on Los Bastardos