Who the hell didn't love Flipper? Cute 'n' cuddly (and how many sea creatures do you know get to claim those adjectives?), the titular bottle-nose dolphin of the classic sixties TV show was a real Up with People kinda mammal. You may not remember any of the specific episodes (didn't most of them have to do with Bud and Sandy being held hostage by bank robbers?), but the image of fun-loving Flipper gliding through the water, dancing on the surface, and just plain grooving on life was indelibly printed on many a child's memory (mine included). 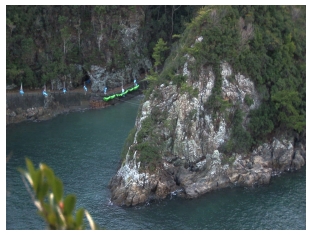 Flash forward forty-plus years. In Taiji, Japan, dolphins are herded into an isolated cove. The best get sold to sea parks and aquariums, the rest are killed for their meat, while Ric O'Barry, the man who captured and trained the original Flippers (there were five of them), resolves to expose the atrocity to the world. The Cove -- directed by photographer, environmental activist, and Oceanic Preservation Society co-founder Louie Psihoyos -- tells the tale of O'Barry's quest to get the goods on the Taiji fishermen, a quest that takes an unexpectedly global turn when it's discovered that dolphin meat, including that coming from the cove, is tainted with lethal levels of mercury.

Psihoyos knows how to build a story, and the film -- as most of the publicity points out -- plays like a real-life Ocean's Eleven. He's also passionate about his environmental cause, and our conversation as a result was an interesting mix that covered the film itself and its underlying issues. Click on the player below to hear the interview:

More Eye-Opening Documentaries on MMP:
Anders Ostergaard on Burma VJ
Jake Rademacher on Brothers at War
Deirdre Timmons on A Wink and a Smile

More MMP on HuffPost:
Monika Treut on Ghosted
Max Mayer on Adam
Marc Webb on (500) Days of Summer
Armando Iannucci on In the Loop