Paul Watson dropped out of Greenpeace because he felt they weren't doing enough to protect whales from fleets hunting in supposedly protected seas. He founded the Sea Shepherd Conservation Society, and over the years has become the bane of whalers -- Japanese in particular -- by employing confrontational tactics that start at stink bombs (did somebody have a bad experience in high school?), run through fouling props, and don' t rule out rammings, if necessary. Are they controversial? Well, Greenpeace doesn't like dealing with them. Does it make for a riveting documentary? Yup, no question. 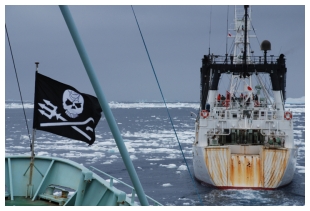 In At the Edge of the World, director Dan Stone (exec producer of Animal Planet's Whale Wars, which also focuses on Sea Shepherd) follows Watson and forty-six volunteers as they track down and challenge a fleet of Japanese whalers hunting in the protected waters of the Antarctic -- the "edge of the world" mentioned in the title. With two ships, one built to handle the treacherous, icy waters but not capable of much speed, the other fast enough but lacking the ruggedness; a bunch of amateurs for a crew; and tracking equipment that's largely a notch up from a game of Marco Polo, Watson dares to take on ships larger and more formidable, and Stone has found the material for a dramatic, beautifully photographed demonstration of how some people are willing to risk their lives to protect an endangered species.

I was able to talk to Stone and his cinematographer, James Joyner. They were willing to clue me in on why one shouldn't necessarily trust a Japanese vessel labeled "Research," and how there are few safe ports in the world for those who would entertain extreme measures to come to the aid of the dwindling whale population.

Click on the player below to hear the interview.

Louie Pishoyos on The Cove
Anders Ostergaard on Burma VJ