There are some films that you're either for or agin, and wow, does The Human Centipede fit into that category. A vivid little bit of Grand Guignol wherein a couple of hapless tourists (Ashley C. Williams and Ashlynn Yennie) stumble upon the lair of the prototypical mad doctor (Dieter Laser) who proceeds to stitch them (and a Japanese guy played by Akihiro Kitamura) together to form the titular medical abomination -- and yes, that means mouth-to-anus and, yes, we do get to watch them experience the subsequent digestive process -- this offering from Dutch director Tom Six is the kind of thing that seems expressly designed to test the will of the die-hard horror-lover. 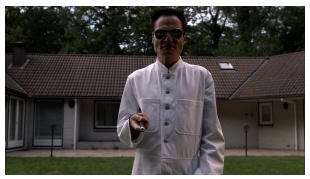 And I surprised myself: I like it. Yeah, I turned off the playback about a half-hour in, but once I steeled my nerves enough to resume, I found that, after reaching about the halfway point, a certain grand absurdity begins to take hold of the proceedings. It helps that the good doctor's creation, once unveiled, is patently ridiculous, and that Mr. Laser has no problem chewing the scenery with a ferocity that suggests that director Six kept him away from the craft services table for the length of the shoot. The film still pushes all kinds of buttons (the tag line reads, "100% Medically Accurate," after all; and the young actors seem to have been cast for their capacity to sob and groan), and some will style this as yet another sign of the fall of civilization. If so, at least we're going down with a laugh.

Tom Six and I had an opportunity to talk about how the film was born from a rather creative notion on the meting out justice, as well as what it takes to wardrobe the modern mad scientist and what the audience might expect from the upcoming sequel (danger, Will Robinson). Click on the player to hear the interview.

More MMP on HuffPost:
The Secret in Their Eyes
The Square and The Sun Behind the Clouds
Waking Sleeping Beauty and Chloe