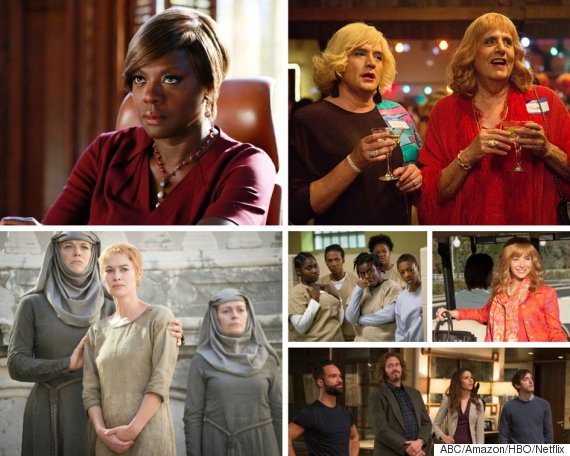 And we're off, marching to the Emmy finish line so the Television Academy can inform us whether it thinks "Modern Family" is the best comedy for a sixth consecutive year. Imagine an alternate universe where the Pritchetts and Dunphys are dumped on the curbs of their increasingly one-dimensional homes. Picture a world where "Broad City" replaces "The Big Bang Theory" and "The Americans" sends "Downton Abbey" back to refinement school. Here at The Huffington Post, we have dreams: big dreams for a better Emmy world, and, in all our optimism, the idea that perhaps they could come true. (This year's rule changes might help.)

In all likelihood, "Broad City" won't dislodge "The Big Bang Theory." But! We do think the Emmy race will be one of the most interesting in years. The Golden Globes, for example, ate up "Transparent," "Jane the Virgin" and "The Affair," and there's a good chance the big-boy TV awards will do the same. We have faith in you, TV Academy. But just in case you've lost your way in the sea of small-screen offerings, and because voting is underway as of Monday, entertainment editors Erin Whitney and Matthew Jacobs are here to help. Below, we've concocted the dreamiest Emmy lineups we can muster. Don't muck this up, voters! Television was too good this year to get these awards wrong come July 16, when nominations are announced.

With the exception of "Veep," "Silicon Valley" and "Transparent," my favorite comedies will have to fight to wrestle spots away from "Modern Family," "The Big Bang Theory" and "Louie." And there's a host of worthy second-tier contenders: "Parks and Recreation," "Black-ish," "Jane the Virgin," "Brooklyn Nine-Nine," "Mom," "Fresh Off the Boat," "Looking," the list goes on. On the bright side, let's recognize that comedy on television hasn't been this collectively good in years.

It's unfortunate "Orange Is the Black" was deemed ineligible in the comedy categories this year, a bad move in my opinion since it definitely won't stand a chance for Outstanding Drama. Still, there were some fantastic sitcoms this year, “Transparent” and "Unbreakable Kimmy Schmidt" being my favorite newcomers. I would love to see awards-season underdog ”Broad City" get some recognition. The final season of ”Parks and Rec” also deserves some serious love for its fantastic use of the season-long time-jump. Channel 4's horribly titled but clever "Scrotal Recall" also deserves a shout-out.

Matt:
“The Americans”
“Game of Thrones”
“The Good Wife”
“The Knick”
“The Leftovers”
“Mad Men”
“Orange Is the New Black”

What should fill the "Breaking Bad" void? (Answer: nothing.) "Mad Men" and "The Good Wife" were wobbly, so I lean toward "OITNB" and "Game of Thrones."

This is my favorite category this year. We not only just finished one of the (if not the) best seasons of "Game of Thrones" yet, but "Mad Men" had a fantastic (if somewhat problematic) send-off. We also got some incredible newcomers with the ultra-depressing but beautiful "Leftovers," surprise hit "Empire" and Vince Gilligan's new addiction after "Breaking Bad," "Better Call Saul."

This category will leave so many talented women empty-handed -- my list alone snubs Amy Poehler, Anna Faris, Edie Falco, Lily Tomlin, Tracee Ellis Ross and Kristen Schaal -- but there is no contest as to whom should prevail. This award begins and ends with Kudrow, who turned in what is probably the decade's best television performance on "The Comeback."

There are far too many funny women in comedy right now to properly give all of them the deserved credit. While Louis-Dreyfus is a sure fit, I would also love to see Poehler honored for her final episodes as Leslie Knope, Schumer for her brilliant and bold third season of “Inside,” Kemper for refreshingly leading a series and Jacobson for stealing the spotlight on “Broad City" this year. As Matt said, though, there are a lot of worthy names I’m leaving out, as well.

There isn't a trace of Hank Kingsley or George Bluth Sr. in Tambor's portrayal of Maura Pfefferman. His performance is the most vulnerable of the group, tapping into a story that's needed telling for years. But it's hard to pass up the chance to recognize Middleditch, whose every tic as nervous tech geek Richard Hendricks is nuanced.

While Parsons is a shoo-in, this year in comedy also has a surplus of solid actors in new series. Tambor, of course, deserves all the praise, in addition to Forte proving he can successfully lead a show and Anderson heading up "Black-ish." I would also love to see Scott recognized for his always endearing and hilarious Ben Wyatt.

Henson and Davis will go head-to-head to become the first black actress ever to win this award. Next up, Annalise Keating defends Cookie on the stand. These are our dreams, after all! (P.S. Sorry, Julianna Margulies, please don't be mad at me. Alicia Florrick is still our Sunday-night queen.)

Can we please give Maslany an Emmy nomination already? The woman could fill up this category alone with all of the characters she plays. But of course, there is an overflow of great actresses I'd also love to see get acknowledged. Moss gave some of her best performances as Peggy Olsen in the final "Mad Men" episodes, while Wilson and Henson added fresh talent to the small screen. There are so many other names left off my list, too, though: Julianna Margulies, Claire Danes, Lizzy Caplan, Michelle Dockery, Gillian Anderson, Keri Russell, and on and on.

We'd like to buy Jon Hamm an Emmy. I was always okay with Bryan Cranston's repeated triumphs, but now is the time to send Don Draper off with some hardware to show for himself.

Now that Bryan Cranston has won all the Emmys he can, the slots have finally opened up for Jon Hamm -- give the man an award already! Also this year, Spacey colored his Frank Underwood with even more complicated layers, Odenkirk gave depth and more humor to his spinoff character Jimmy McGill, and Owen proved he’s just as great on the small screen as the big. While Theroux’s, uh, jogging sweats stole the spotlight on “The Leftovers,” let’s give the actor some praise as well.

I'm disappointed not to have spotlighted "Looking" more across my ballot, but Weedman is the show's true treasure. She won't be nominated, which is sad because she deserves to win the whole damn thing.

Both "Transparent" and "Kimmy Schmidt" had fantastic female supporting characters, and while Hoffmann is the obvious pick for the former, Landecker is just as worthy. Then again, I'm also leaving out Allison Janney for "Mom," Judith Leight for "Transparent" and Carrie Brownstein for "Portlandia," just to name a few.

I cannot believe I've convinced myself to omit Tony Hale, but he's won already and "Veep" didn't give him a whole lot to do this season. Let's throw our attention toward some of the Meyer administration's other gofers. Regardless, there's no one whose grinning line delivery is more well-timed than that of Woods, who taught us all about SWOT boards, sleep-talking in foreign languages and how to not talk about feminism.

Give all the Pinot Noir and nominations to Burgess, please and thank you. Some other deserving newcomers include Jay Duplass, who is just one-half of the Duplass empire taking over TV and Camil's telenovela star in "Jane the Virgin." While this season of "Girls" was disappointing overall, Karpovsky stood at as the one likable character and the only one worth caring for.

I could fill all six of these slots with "OITNB" actresses. As it stands, I've omitted Uzo Aduba (that one was especially tough), Lorraine Toussaint, Kate Mulgrew, Adrienne C. Moore, Yael Stone, Selenis Leyva and Natasha Lyonne. You're all deserving, ladies. (You, too, January Jones!)

This category is like "Sophie's Choice" to the 10th degree. There are so many names I couldn't fit on it, and like Matt, I wish I could fill them all with the "OITNB" cast (shout-outs to all the women Matt listed, as well.) But I simply had to include January Jones on my list -- I promise it's not a pity vote -- as she gave her absolute best Betty performances yet during the final episodes. It was also hard to choose between Coon and Anne Dowd on "The Leftovers," and to leave out Elizabeth Marvel and Kim Dickens from "House of Cards." Yet after Cersei's Walk of Shame, Headey stole their spots.

I'm surprised to say this is one of the year's duller categories, if only because it'll likely be peppered with repeat players: John Slattery seems poised to earn one more "Mad Men" nod, while Jon Voight ("Ray Donovan"), Jim Carter ("Downton Abbey") and Mandy Patinkin ("Homeland") are waiting in the wings for theirs, as well. Instead, let's put the focus on the "Better Call Saul" dudes (Jonathan Banks is great, too) and two men who adeptly handled the changing tides of early-1900s racism (Holland) and homophobia (James-Collier).

Just like the last category, there simply aren't enough spots for all of the amazing talent we saw this year. Part of me wanted to add Kit Harington to the list, but I think I'm just still in deep mourning. Vincent Kartheiser ("Mad Men"), John Slattery ("Mad Men"), Nikolaj Coster-Waldau ("GoT"), Ben Mendelsohn ("Bloodline"), Michael Harney ("OITNB") and Michael Kelley ("House of Cards") were also all fantastic this year.

And a few more nominations we'd love to see