In recent weeks, there has been a pretty steady stream of articles reporting on the much improved religious climate at the U.S. Air Force Academy, many highlighting the addition to the campus of a permanent outdoor worship area for those who practice Wicca and other Earth-centered religions.

Has the religious climate at the Academy improved? Absolutely. The number of active cases at the Academy being handled by the Military Religious Freedom Foundation (MRFF) has dropped dramatically, a trend that can be credited in large part to the highly productive working relationship forged between Academy superintendent Lt. Gen. Michael Gould and MRFF founder and president Mikey Weinstein -- a relationship based on a mutual respect for each other and a mutual respect for the Constitution.

The New York Times, the Associated Press, and others are all reporting the good news. With the support of Academy chaplains, Tech. Sgt. Brandon Longcrier, an Academy staff member who works in the Academy's astronautics labs, successfully led the effort to erect this new worship site, which will be formally dedicated in March. CNN even made Longcrier one of its "Intriguing people for February 2, 2010."

This all sounds great, right? Problem solved. No more Christian supremacy at the Air Force Academy. A new era of complete respect and equality has been ushered in. Well, not quite. A photo sent to MRFF tells a somewhat different story. Take a look at the message left by some of the Academy's brave, anonymous Christian supremacists who recently decided to pay a little visit to the new worship site. 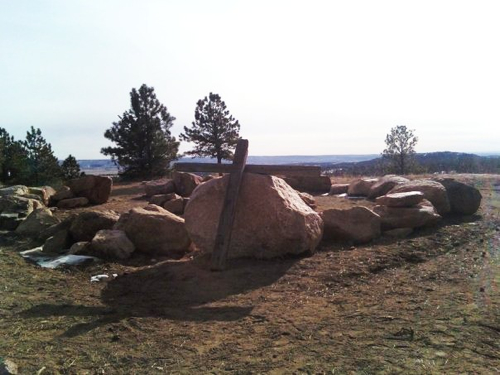 "The abhorrent placing of a large, wooden cross at the official worship site of the United States Air Force Academy's earth-centered religions is nothing short of a despicable, cold and calculated hate crime of the most serious magnitude. That's the bad news. The good news is that the Academy's leader, Lt. Gen. Mike Gould, is acting swiftly and decisively on multiple levels to effectively deal with this heinous act of unconstitutional fundamentalist Christian supremacy," said Weinstein, who has been in contact with Gould since being informed of the incident. "MRFF has been advised that official investigations are underway to try to ascertain who committed this act of religious hatred, and precautions are being put in place to ensure that the chances of something like this happening again are very small. In years past, the Academy was making zero progress in the area of religious respect, often falling backwards in fact. Now, fortunately, we're in a crawl, walk, run mode; right now 'between fast crawl and slow walk.' This is progress; slow but steady. It is MRFF's reasonable expectation that every person who lives and/or works at the Air Force Academy will be swiftly debriefed as to (1) the specifics of what has, sadly, just transpired, and, (2) that there exists an absolute 'zero tolerance' policy for such disgraceful and cowardly acts of religious ambush."

In spite of the progress made under Lt. Gen. Gould's leadership, some MRFF clients at the Academy continue to harbor fears of harassment or worse for openly practicing non-mainstream religions.

As one client expressed in a recent e-mail to Weinstein:

"You should see the hate spewing on some of these websites where the 'Circle' article has been posted. These are the people I'm worried about. Do I need to warn my cadets to fear for their safety now? How sad would that be if our victory turns into a tragedy due to the ignorance and hate from the fundies!"

UPDATE: Any articles or blog posts saying that MRFF is satisfied with the Air Force Academy's response to this incident are not accurate. MRFF's expectations, given the response of Lt. Gen. Gould to previous issues and incidents, are unfortunately not being met in this case, according to reports from individuals at the Academy.