On Thursday evening, artist Fito Segrera will sit at a computer, log into a chat room and wait for people to send him emoji.

But Segrera won’t just see the cartoon-like illustrations. He’ll also become them: Each time he receives an emoji, a patchwork of muscle simulators will send electric shocks to Segrera’s forehead and cheeks, forcibly contorting his face into the shape of whatever emoji his chat partner chooses -- a smiley face, a winky face, or a frowny face.

This performance piece will be featured among more than a dozen other works at the Emoji Art and Design Show, the first art exhibition to focus on the playful illustrations that have become an indispensable visual language for texters everywhere.

Even as the pieces celebrate the world’s love for emoji, many, like Segrera's, also showcase a darker, problematic side to the clapping hands and grinning cats. The emoji artworks, all smiles on the surface, underscore how little nuance exists in our digital conversations and how poorly technology captures the range of human emotion.

Online, we flatten parts of our personality to squeeze into the confines of a status update or a text. Segrera's work, a collaboration with artist Emilio Vavarella, forces the two-dimensional onto the real world -- and shows how badly it fits.

Emoji offer “a kind of digital mask," says Segrera. "We don’t know what’s happening behind it.” 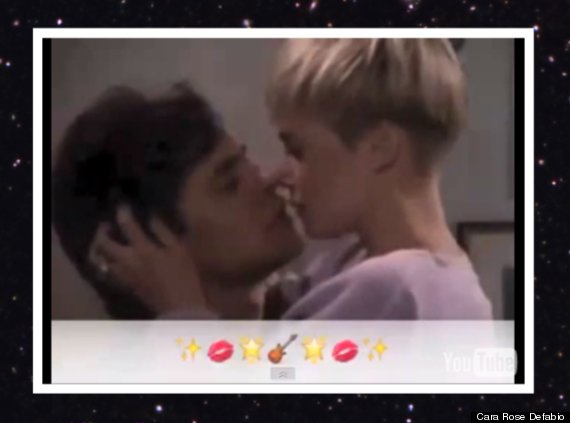 A still from Cara Rose Defabio's "Melroji Place," which shows the popular soap dubbed with emoji.

Internet observers are fond of arguing that emoji have gotten so popular because they fill our need to communicate more clearly online. Rapidly typed text can sound overly harsh or cold, and the mini pictures, which emerged out of Japan, can infuse otherwise drab messages with humor, sarcasm and tone. Like this

A lot of the time it seems to work. I confess to using emoji more frequently than some of my friends might like, and even Segrera finds them handy. But in the artworks on display, emoji more often appear to hide real feelings. You don't end up seeing more, you just realize how much you're missing.

Genie Alfonzo’s emoji-fied version of Pablo Picasso’s “The Old Guitarist” replaces the gnarled, downturned face of a blind musician with the grandpa emoji’s wide grin. The forlorn guitarist, his skin a sickly shade of blue and his bones jutting at uncomfortable angles, has become a cheery, portly granddad. All the misery and isolation -- and depth -- of the original painting disappears. 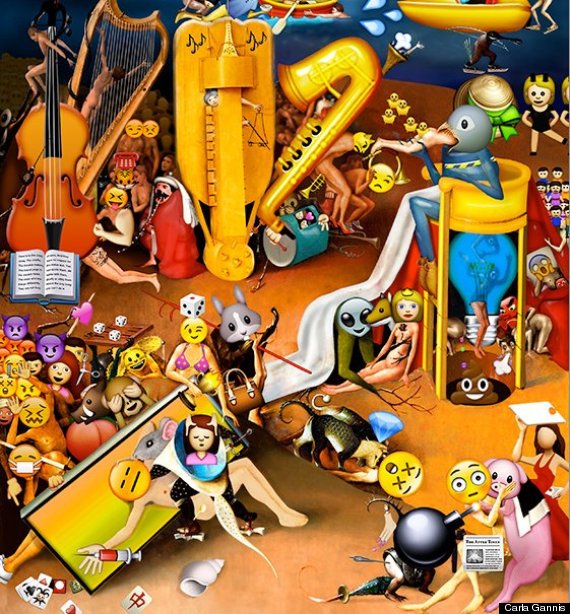 Detail from Carla Gannis' "The Garden of Emoji Delights."

Likewise, Carla Gannis’ “Garden of Emoji Delights,” a reinterpretation of Heironymous Bosch’s triptych, makes eternal damnation look downright adorable. There’s still the man-eating bird pooping humans out whole into a brown pit of (literally) human waste. But the beady-eyed monster with scraggly hair is now a cute pigeon. Even the shit is smiling. These works, like Alfonzo’s emoji-style Sistine Madonna, give you an itch to peel off the emoji to see the full range of expression concealed beneath.

A video by artists Luciel Perte and Noah Spidermen, meanwhile, makes emoji seem almost nefarious. Their work “Japanese Castle, Western Castle” shows a hypnotic hive of emoji swirling across the screen, while the voice of Siri narrates each expression in a drab monotone. (When Siri reads emoji out loud, she offers quite literal, and strangely bleak, interpretations: "person with pouting face," "fearful face," "crying face," “loudly crying face.") All the energy of emoji is removed, and what’s left is a pretty sad attempt at emotional expression.

“Although we can be distracted by the colorful nature of this swarm, this piece reminds you that, in the end, this is still a cold technology," says Zoe Salditch, one of the curators of the Emoji Art and Design Show and the communications director at Eyebeam, which is hosting the exhibition. "The first time I saw it, my jaw dropped: it's eerie, it's haunting -- and the coldness!"

Even as emoji are taking on Campbell's soup can status, there are signs they're getting edged by a new way of sharing feeling over screens: the human emoji, a.k.a. the photograph. Our grimaces, smiles, pouts and sneers are becoming the punctuation marks for our electronic dialogue, so we can show, not tell, what we're feeling. In our social lives, photographs are supplanting the written word as the currency of human dialogue. And yet because of it, we may be saying more than ever.