What are we to make of emoji? What was once a smiling face twisted and manipulated into a spectrum of facial expressions has morphed into an overwhelmingly comprehensive visual language akin to hieroglyphics. They've taken over text messages and social media, proving capable of communicating simple ideas through images of dancing ballerinas, hammering gavels and steaming (albeit cheerful) piles of poop.

A new exhibit at New York's Eyebeam Art+Technology Center sifts through the variegated universe of emoji in the aptly titled "Emoji Art & Design Show." Featuring an array of digital prints, sculptures, video and performance, the exhibition explores this new form of communication by appropriating the characters as components of artwork. It's an "examination of the emoji zeitgeist," as the online description states, that tears through the codification and emotional obscurity of contemporary society's answer to cave paintings.

We chatted with Gannis -- a Brooklyn-based artist who also serves as the Assistant Chair of Digital Arts at Pratt Institute -- over email to discuss the ins and outs of emoji, the allure of Mr. Bosch and what Eyebeam's dive into the visual vernacular really means.

When Eyebeam put out a call for emoji art, what was your first thought? What was most intriguing about the concept?

My first thought: "well, yes, of course…" Meaning that the idea -- in following recent art world events that focused on the Tumblr platform or the Vine app -- was timely in drawing attention to one of the "visual languages" that's being used across so many digital platforms.

Given the context, an exhibition at Eyebeam Art & Technology Center, I was intrigued by the various possibilities of these little pictographs being transcribed and/or re-codified by artists and designers into interactive platforms, large-scale installation works, digital collage and even being represented in traditional media, like painting and drawing. I haven't seen the show yet, so I don't know all the outcomes, but I can't wait to go to the opening tonight!

How long did it take you to get from emojis to Hieronymus Bosch?

I seriously had a "lightbulb" (insert emoji) moment. I sat down at my computer, typed in emoji on Google, then a few seconds later, after looking at a grid of emoji imagery, I typed in Bosch. I then did a follow up search to see if anyone else had made Emoji Bosch art. I didn't find anyone, and got to work on my first draft. Six hours later, I got up from my computer and am pretty sure I had dreams (nightmares?) about emoji/Bosch "hybrids" that night.

I've been a big fan of Bosch's work for a long time. He represents Christian iconography in a very distinct and fantastical way. Of course the Surrealists dug him. And as we go more in the direction of a trans or post-human world, via bio-tech, Bosch's chimera seem prescient. Now, more specifically with regards to emoji, "The Garden of Earthly Delights" (also referred to as "The Millennium") seems almost as ubiquitous on Google as emoji, so I wanted to make something that contextualized emoji within this well known iconographic lineage, re-inscribing Bosch's work, (the right panel from the triptych; a hellscape) using a secular, pop vocabulary of signs and digital symbols. Emoji -- which are usually viewed via a sleek, minimalist screen interface -- signify differently when overlaid onto a classical painting. 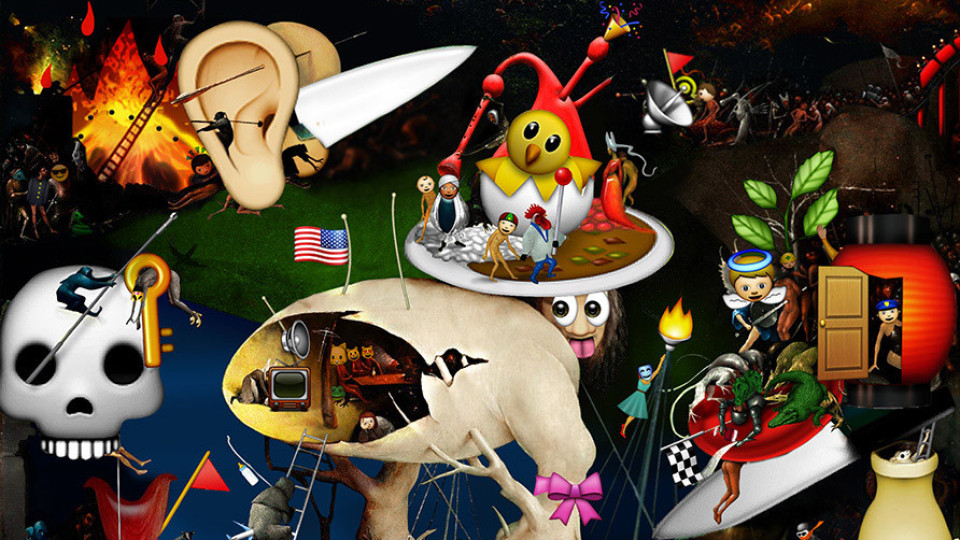 Looking at the original Bosch work, it's visually overwhelming how the painting is at first glance a sort of bright, inviting triptych -- with its pinks, blues and greens. It beckons you to crane your neck and discover that those colors mask some pretty horrific details. In that vein, I can see how emojis aren't a far leap. A group of the little icons can seem so welcoming, but strewn together can weave a completely different narrative. It ends up seeming very Bosch, no?

The Eyebeam exhibit admits that "visual vernaculars" have been used in the past, but emphasizes the millennial fascination with this sort of visual self-expression. What is your take on the contemporary obsession with emoji?

One reason I think these little pictographs are so popular is because we communicate via a keyboard so much. I rarely talk on the phone, preferring to text or DM, etc. And to be honest, I stay very busy, so I connect with friends virtually more than IRL. Emoji provide a means to communicate with more expression, emotion even, in an abbreviated and fast-tempo way, where face/body/image cues are lacking. It's not surprising that artists and designers would pick up on this visual vernacular as a new expressive medium. I think this show will have a significant impact on showcasing emoji as a new kind of pop/netart.

Do you have any plans of continuing the emoji theme in your work? It seems like other classic paintings could have emoji hidden within as well.

Emojis have come up in a few other projects, but not as the primary source of the content, for example in my "Non-Facial Recognition" series and in a body of work entitled "legend legend" where emoji are inscribed (with lots of other net, tech and digitalized body references) in drawings, digital print works and 3D printed globes.

I've been encouraged by friends to complete the entire Bosch triptych now, given that I only "transcribed" one panel. I will probably do it, because I'm obsessive, and feel like there's a world I've just begun to explore. I want to push the scale of the physical prints going forward too (this work is only about 9 by 22 inches). The one reservation I have is that the other two panels are more pastoral. I think I like working with the emoji and their (seemingly) "happy signifiers" as counterpoint, so darker themed work adds more of an absurdity to the image, like Goya's "Disasters of War" or a still from Terry Gilliam's "Brazil." Maybe emoji are a more complex pictographic language than they're given credit for, particularly right now, at the height of their popularity and ubiquity.

Finally -- and, obviously most importantly -- if you could summarize yourself in a few emojis, what would they be?

I switched my profile pic on Facebook and Twitter last week to the image you'll find attached. I guess this summarizes the emoji me. :) 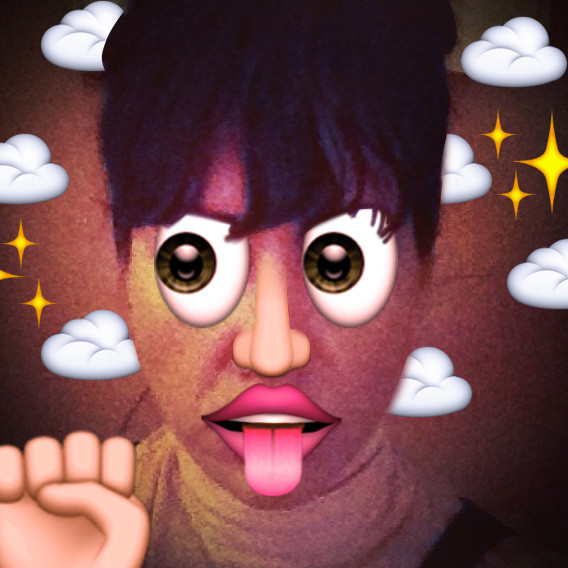 "Emoji Art & Design Show" will be on view from December 12 to December 14 at Eyebeam in New York City.