Not every playwright wants their work to start a movement. That's where Eve Ensler differs. When she wrote The Vagina Monologues in 1996, vagina wasn't a word that was used during television interviews. The play has since spawned not only innumerable performances, it has launched the global action of V-Day, built the City of Joy (a center for women in the Democratic Republic of Congo) and raised $80 million for programs to end violence against women.

Therefore, it is not surprising that Ensler's new theatrical endeavor, Emotional Creature, based on her best-selling book of the same name, would take on issues faced by girls across the world. Ensler's premise is that "every girl has a story," and what is learned from a theatrical interpretation can be "applied to the community."

At the Pershing Square Signature Center in Manhattan (in a limited engagement through January 13, 2013), I attended a matinee that had been designated as a mother-daughter event. Ensler was present for a talk back with the audience. She was joined by young women activist leaders and the top-notch cast.

The stagecraft is simple: a platform that extends beyond a semi-circle, which has three screens behind it. There is a slide show before the action begins. Aphorisms projected include, "My Dress Doesn't Say Yes; Love Yourself; I Am Not a Sex Object." During the production, the chosen images set the scene, location, and mood for the different pieces. Cornell-like boxes, with elements that might be a part of a young girl's life, envelope the set. One construction had sneakers and jewelry in tandem with textiles and an African sculpture.

Starting with an ensemble game of "Would You Rather? -- the girls suggest opposing choices that never include getting it all. This segues into a piece about peer pressure and ostracism. The hungering desire to be part of a group is palpable. The refrain is, "Please let me in." Next up, and not unconnected, are the body image pressures. The necessity of being thin in order to be pretty.

The stories start to flow. A girl from Iran relates how her parents took her -- without her prior knowledge -- to get a nose job so that she could look like a "princess." (Ensler noted that in another production, the girl was an American Jew.) Conversations about sex and asking a boy to use a condom follow. A riff on Barbie by a 15-year-old factory worker in China, laboring under horrific conditions, expresses her internal thoughts about her job attaching Barbie's head to her body. The subtext comments on the relationship between the goods and services delivered to those in affluent parts of the world -- by those working in substandard conditions to deliver them. And who better to embody this disconnect than Barbie, who actually does have more in her head than, "I want to go shopping" and math is hard."

Mixed in are darker and ominous tales about realities that face too many girls in other geographical locations. These depict accounts of sexual trafficking, rape, enslavement, and female genital mutilation. The latter has a tension breaking moment when the character drily exclaims, "I have a whole village after my clitoris!" There are no such moments of levity in the harrowing recitations of being sex trafficked in Bulgaria at 16, or surviving daily rape as a sex slave in Congo.

One of the questions that Ensler fielded from the audience was how and why she decided to integrate heavier segments with pieces more skewed to adolescent identity concerns.

Ensler responded without missing a beat. She said, "Everything is in the same breath. It's about patriarchy." On comparing anorexia to rape, Ensler observed, "Both of these things are horrible." Discussing the "tyranny of self-hatred," Ensler insisted, "The heart of each girl is in every girl."

Ensler's hope and goal is for each individual girl to "empower her authentic self," and she contends that all girls have a story. Ensler wants to take lessons learned from the play and "apply it to the community." She said emphatically, "These pieces can be done everywhere in the world. The characters and actors shift the interpretation."

The commonality running through all of Ensler's endeavors is the belief that girls and women need to take ownership of the concept, "I have value." She pointed out, "Most of us don't get our value. When people tell their stories, you know that you are not alone."

Part of Ensler's vision for theater is to connect back to the Greek premise of using comedy and tragedy as a vehicle for catharsis and healing -- while combining it with instruction and information. She and the producers are hoping that sponsored tickets for group attendance will comprise part of future audiences. In response to an inquiry about a critic's observation that the play was not "ideal entertainment for the Mitt Romney demographic," Ensler begged to differ. Clarifying how she wanted educators and decision makers to see the play, she said, "I actually think it is for the Mitt Romney crowd."

Beyond Emotional Creature, Ensler has One Billion Rising on the horizon. It is an action coinciding with the 15th Anniversary of V-Day on February 14, 2013. The goal is to gather "one billion women and those who love them to walk out, dance, rise up and demand an end to violence against women. The video promoting the event, "Break the Chain," has the same infectious energy as the musical numbers in Emotional Creature.

It's a lot to undertake -- but Ensler is on course to pull it off. 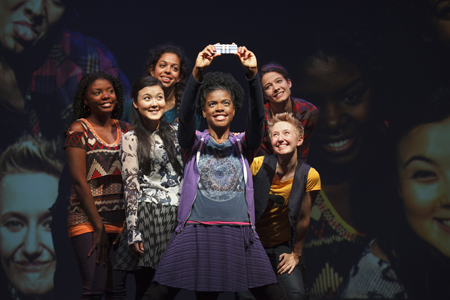