A few weeks ago, a headline caught my eye on LinkedIn. Judging by the numerous comments and rebuttal responses, I wasn't alone.

Clearly crafted to raise eyebrows (and clicks), it proclaimed, "Emotional Intelligence is Overrated." After tucking away my initial skepticism and lowering my raised eyebrow, I read through the article to investigate author Adam Grant's points. After all, I respect Grant and his work.

The article tells a cautionary tale of a CEO who puts a good deal of faith in the importance of emotional intelligence, only to be "proven" wrong not once, but twice, by Grant and his team who conducted experiments with "hundreds of salespeople."

We're meant to see this story as proof positive that corporate leaders are better off assessing cognitive abilities and relegating the assessment of emotional intelligence (EI) to the touchy-feely fields where "you have to deal with emotions every day, like sales, real estate, and counseling."

Three paragraphs in, Grant rather provocatively describes anyone who believes in the validity of EI as belonging to a "cult." Not exactly the dispassionate stance of someone conducting unbiased research, but it is effective at spurring further reading and debate.

I understand where Grant and I (and others like me) diverge in our understandings of EI: measurement and application.

How do we measure EI?

Grant's article seems to imply that measuring emotional intelligence is standardized and agreed upon by experts. It is not.

As other experts like Dr. Kenneth M. Nowack have explained, there are multiple recognized measurements of emotional intelligence and all but one type are backed by comprehensive studies that confirm their validity as important factors in professional success.

According to Daniel Goleman's rebuttal:

Grant's chosen assessment, which measures one's ability to correctly identify emotions largely by looking at photos of human faces, is designed to measure how well a person can understand, read, and interpret emotions. But it does not assess social fluency (how well an individual acts on that ability or applies that intelligence).

So it's not surprising that when you look at a test that doesn't measure the application of emotional intelligence, you're not going to find a positive impact on career or corporate goals.

After all, a toddler may have the ability to recognize and correctly interpret emotions, but that certainly won't stop him from throwing a temper tantrum. He lacks the necessary emotional regulation. And we all recognize that grown-up equivalents of temper tantrums have a negative impact in the workplace, and in our lives overall.

The reason so many people believe in the validity of EI has nothing to do with being members of a cult, and everything to do with common sense and observation in the real world. Sure, data can sometimes overturn the apple cart of "common sense," but in this case, the other methods of EI measurement are absolutely correlated with greater success in both professional and personal spheres.

These studies bear out what our own common sense (and the CEO in Grant's example) tells us is true: Emotional intelligence matters deeply. 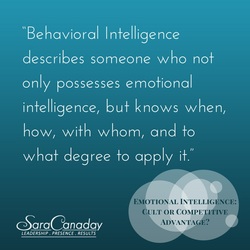 In an effort to focus on the characteristics and behaviors that will and do lead to improved professional outcomes, let's discuss other terms that may be more effective: terms like applied self-awareness, social fluency, and behavioral intelligence.

The difference between these phrases and the harder-to-pin-down "emotional intelligence" is that they involve action, rather than a passive state of being. These terms describe someone who not only possesses emotional intelligence, but knows when, how, with whom, and to what degree to apply it.

Picture the C-level executive who knows exactly how to communicate criticism to team members in a way that motivates them, rather than crushing them. Or the normally animated and enthusiastic leader who suddenly gets quiet in order to convey the gravity of an event. Think of the high potential who remains poised, calm, and in control when challenged in a meeting. Or the CPA who has a larger and more stable client base than her peers because she knows how to deliver bad news without creating alarm.

These skills are not only important to a small, select slice of fields and people. They are the skills that benefit anyone, in any arena. Think of the ability to write well. It may not be the first skill you think of when you think of science, but anyone in the scientific community will tell you that the ability to write well will set a scientist apart from equally intelligent scientists who are poor writers.

Similarly, you may not need to improve your behavioral intelligence to get by professionally... but is "getting by" really your goal?

In my work, I've found so many people for whom intelligence and ability were never the problem. These people have excelled in many ways, have laundry lists of achievements, and yet something is holding them back. They've stalled. They find themselves sitting at "good enough" -- but it's not good enough for them.

Behavioral intelligence, social fluency, the ability to apply emotional intelligence -- these are the teachable skills that can launch people into greater professional and personal success.

As Nowak cleverly concludes in his article: "it's not how smart you really are that matters in terms of work and life success, but how you are smart."