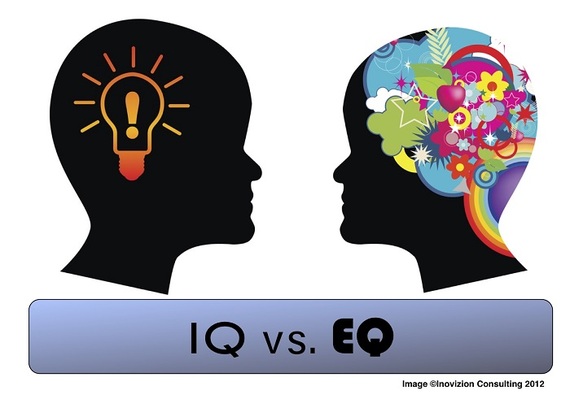 Other things equal, smart people should probably rule the world. They get into the best schools, they get the best jobs, they make the best leaders and they live the longest lives. In fact, there's even evidence smart people are the most attractive.

Yet, despite their brains and good looks, many of the high-IQ'd make messes of their lives and careers, giving the rest of us the chance to compete with them, succeed them and, better yet, to collaborate with them in doing great things.

Unfortunately, that's not encouraging enough news for many of us. We'd rather take comfort in the view that intelligence and talent don't matter. We'd like to believe there's some "great equalizer" that will instantaneously (or at least through enough training) make us great all on our own.

And like ambulance chasers, an industry of consultants has rushed to offer us what we seek: They call it emotional intelligence (EQ).

Commercial EQ, as distinct from its original, more academic concept, "EI," is pretty much everything that makes a person normal. It's "the capacity to be aware of, control, and express one's emotions, and to handle interpersonal relationships judiciously and empathetically" (dug up on the Internet).

In other words, commercial EQ is the catchall for how we should interact socially, assuming we are social at all. Never mind that IQ probably impacts that social interactiveness.

Yet, genuinely scientific studies don't support any of these claims. In fact, the academic consensus is that the commercial version of EQ (what's known as "mixed EI") doesn't distinguish greatness (in terms of income, success, leadership, etc.) at all in the presence of IQ and a decent personality.

In other words, most high IQ people have high EQs also and, by implication, only people without a modicum of social skills and weak intelligence could perhaps gain even modestly from commercial EQ training or boosting -- and it's doubtful they would ever achieve greatness in doing so.

Those results fit what most of us probably observe (but don't want to accept) anyway. We like to think that successful people cannot be smart without some vague set of social skills and "niceness" that we define. Yet, the world is full of uber-successful people (read: Steve Jobs) that are very smart but notoriously bereft of much in the way of EQ.

And we don't see tons of the reverse. Unfortunately, success does not necessarily require tons of EQ aside from those cases where one might apply its dark side to manipulate or use others as necessary. Anyone that regularly flies business class or travels in the Amtrak Acela Quiet Car can attest to how successful leaders can be extremely bright but completely oblivious to others' emotions.

Yet, my aim is not to compare EQ, IQ, MQ or any other Q -- scientists have done that and the answer is clear: EQ, when defined in any way that makes sense, is important, just not as important as IQ. Rather, when I say that EQ is overrated, I'm saying that it shouldn't serve to nullify our differences in talents and abilities that could be shared in doing great things.

EQ should not be a competitive tool, but a cooperative force.

For the beauty of life is played out in the drama of how we use that diversity of talents in our interactions to achieve, or at least attempt to achieve, great things. The beauty is thus in the joint struggle: whether it's in building a great company, raising a great family, developing a great community or to becoming great friends.

And our recognition of that beauty manifests in our disposition towards the underdog--the competitor whom we support, despite his or her obvious disadvantages. Our hearts beat more for the runner who comes from behind to win the race (or even nearly win it) than it does for the one who maintained a lead all along.

Indeed, we're told that even angels in heaven rejoice more over the finding of one lost, disadvantaged sheep that comes to its senses than the ninety nine that were never lost.

Hence, there's something incredible, beautiful and even mysterious in those demonstrations of greatness that cannot be equalized, measured or replaced by instantaneous solutions offered in a bottle or assessed by scores on an exam. Yet, those scores may still mean something in terms of detecting the gifts that many of us have.

To leverage that something, however, our society should perhaps worry less about finding and developing equalizers, quotients and measures of ability and more about accepting and gauging how our existing measures can help us identify important talents to be shared. We know IQ and (and to a lesser extent) EQ are important, for example, now let's learn how to use them to achieve more.

Thus, while I applaud the organizers behind programs that attempt to help inner-city children boost their EQs, I'd rather see initiatives that help such children learn how to identify and seize opportunities by sharing their talents. Help them identify and appreciate the differences and strengths of others so that they can be infinitely stronger together. To me, that's genuine, emotional intelligence and that can't be overrated!

More:
Businesshealthy livingEmotional Intelligenceachievement gapLeadership
Newsletter Sign Up
The Morning Email
Wake up to the day's most important news.
Successfully Subscribed!
Realness delivered to your inbox

Writes about the mental hangups that hamper success