How good are you at picking up on the emotions of others? Whether you're the type of person who only has to take one look at a friend to know they're having a rough day or you don't notice until they tell you how they feel, has everything to with how intelligent you are, and I don't mean book smart.

The idea that humans have multiple intelligences, or that every person has their own skill set has been popularized since the 1980s. Emotional Intelligence, or EQ, is one of the models that has grown in importance. Daniel Goleman has spearheaded much of the emotional intelligence research and application in his book "Emotional Intelligence: Why it Can Matter More Than IQ."

What Is Emotional Intelligence?

Emotional intelligence (EQ) is the skill, capacity, or ability to identify, assess and control the emotions of oneself, of others and of groups. 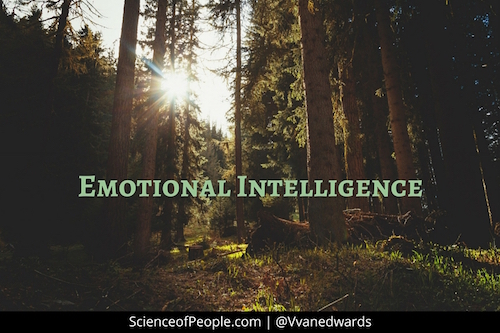 Why Is Emotional Intelligence Important?

Emotional intelligence is an essential part of our day to day interactions and well-being. It influences our lives in three major ways:

Emotional Intelligence is incredibly important. In our technological age, emotional skills aren't seen as playing a big role in many parts of our lives and so people don't practice them as much as they used to. We are spending less time with our peers talking about emotions, or attempting to read and gauge others' emotions. Instead, we 'read' emotions through text, email, chat or Facebook status updates. Because of this, we must begin to teach ourselves how to have emotional intelligence skills.

Luckily though, you don't have to have naturally strong people skills to develop a high EQ. As long as you're willing to put in the effort, anyone can learn to be emotionally intelligent.

One of my most popular talks is emotional and social intelligence. In my talk I teach specific concepts which are pulled together from a variety of the best resources on Emotional Intelligence:

Luckily, emotional intelligence is absolutely a skill that can be taught. As you learn about EQ from my blog Science of People or others, apply it on a day to day basis so you can work on the areas you need most help in.

Goleman, Daniel. Emotional Intelligence: Why It Can Matter More Than IQ (1996) Bantam Books.