A small child stands in the bus station looking lost, holding a plastic bag with a few belongings, and hoping to be welcomed and find a home in this country. This was the scene a few months ago in Arizona and Texas when hundreds of undocumented children, some with their mothers, others alone, traveled from Central America and crossed the U.S.-Mexico border looking for a safer and better life. 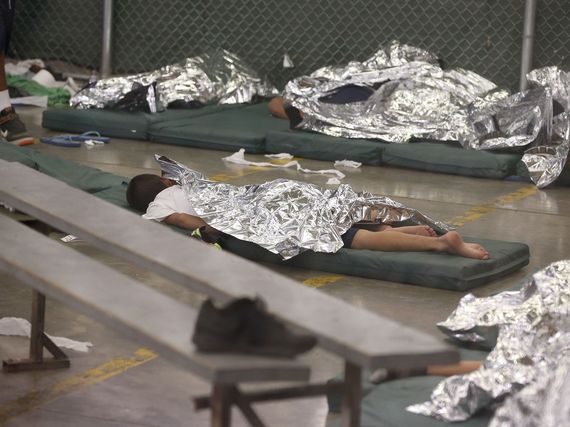 This weekend moviegoers can see a small brown bear standing alone on a train station with his cardboard suitcase, also looking for kindness and a place to call home. Children will fall in love with Paddington bear, a migrant without papers who adores marmalade sandwiches and hides away on a boat to travel from his home in Peru to London hoping for a better life. Having lost his parents in a natural disaster, his aunt, too frail to care for him, suggests he travel to England. Years before, a British explorer taught the bears English and to love marmalade, and said they would be very welcome in his country. When the little bear arrives at Paddington station in London (his Peruvian name apparently unpronounceable he takes the name of the station), he sees a family heading home and, in desperation, steps forward to ask for help. 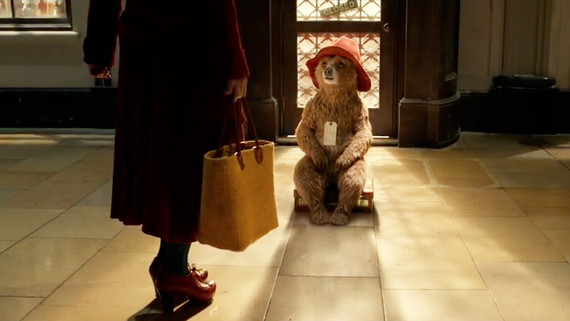 The father, Mr. Brown (played by Downton Abbeys' Hugh Bonneville) is skeptical and walks by rapidly, warning his children to stay away and distrusting the immigrant's plea. But the mother, learning that the bear is an orphan and has no home, invites him to stay with the family. Much hilarity ensues as Paddington struggles to cope with the culture and technology of Britain, trying to do the right thing. He is relentlessly polite, helpful and expects kindness and fairness from everyone. Not everyone is welcoming -- the neighbor hates immigrants and an evil taxidermist (Nicole Kidman) wants a stuffed bear -- but Paddington also meets many friendly people and concludes that the diversity of contemporary London means that 'everyone is different but everyone fits in'.

Geography, my own scholarly discipline appears in the film as a club for exploration with colonial characters part of a 'guild' that documents the world and brings back specimens to be stuffed for museums. Hopefully the contemporary discipline of geography embraces kinder traditions -- many of us work on conservation, regret our past association with colonial exploitation, and document and advocate for more humane immigration systems.

The Paddington Bear stories by Michael Bond were some of my favorite bedtime readings as a child growing up in England, and I loved Paddington just as much as that other famous English bear Winnie-the-Pooh. The stories may even have stimulated my early interest in conservation -- Paddington is a spectacled Andean bear from the disappearing rainforests of Latin America.

I am a migrant as well, moving from England to North America to study, and then staying for love and the career opportunities for women scientists. I am very grateful for the chance I had to move to this country and become a citizen, joining the millions who have migrated here over the centuries. But I know my path was so much easier than those children who crossed the border from Latin America this summer and were then sent to detention centers, deported or died in the desert.

The Paddington movie offers an opportunity to talk about the immigration debate with kids. They may see the connection themselves and want to discuss why so many children undertake the perilous journeys to escape poverty, disaster and violence that take them over borders and across the world.

I hope people will go to see Paddington -- a massive hit in London when it opened in December and a funny, furry, family friendly movie. It carries a message of tolerance and kindness for young immigrants that the US Congress seemed to forget this week when they voted to put thousands of children of undocumented migrants back in fear of deportation. Such sentiments would have probably put Paddington right back on the boat to poverty and loneliness and we would never discover the charm and earnestness of this youth who so sincerely wants to learn, succeed and contribute to his new country.

School of Geography and Institute for the Environment, University of Arizona; Public voices fellow, OpEd Project