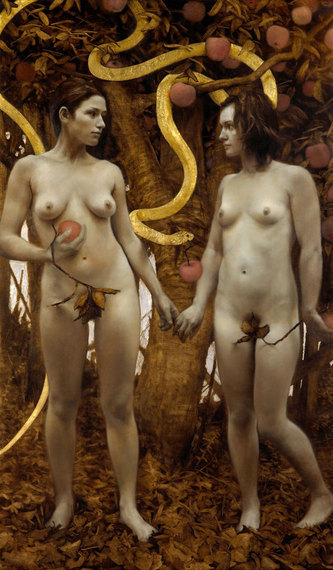 There is a bias that seems to be rapidly fading these days, but I still run into it from time to time: realist painting that traces its roots back to the grand European traditions, is inherently "conservative." I still come across reviews of exhibitions where terms like "academic" and "kitsch" are used by critics as poison darts to negate the works and intentions of traditionally skilled painters. In these contexts there is often a faulty association being made: if an artist's training is rigorous and traditional, their political inclinations must also be retrograde. It's a weak and dangerous correlation that creates mis-understandings and underestimates the intellectual independence of the current generation of realists.

"This is a subject I'm actually thinking about a great deal these days, particularly in light of the extreme political polarization we've seen take root in the US in recent years," comments artist Steve Linberg, "Once you have 'conservative' stuck to you as an artist, then no further evaluation is needed, or desired. And that's a way to give people less attention than they deserve, and to oversimplify, and that's always regrettable (at best), or even dangerous (at worst)."

In terms of values-- political and personal--skilled representation strikes me as being a way of working that can say whatever it wants to say. Artist Betty Shelton puts it this way: "To be a realist, in this day and age, makes many of us independent thinkers, and not compelled to follow what is 'popular.' I personally don't think that being a realist equates with being conservative, or liberal." 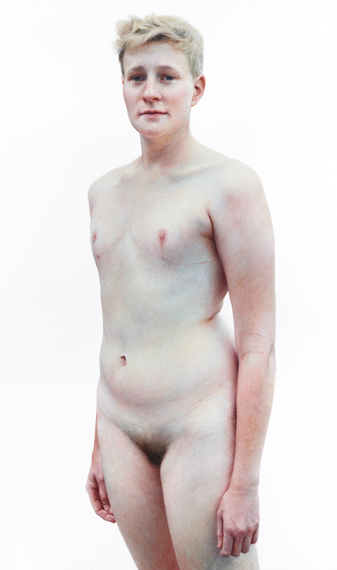 Of course, not everyone agrees. The German art historian Benjamin Buchloh, in his 1981 essay Figures of Authority: Ciphers of Regression: Notes on the Return of Representation in European Painting warns of the "idealization of the perennial monuments of art history and its masters," a tendency which he connects to the "syndrome of authoritarianism." It doesn't help that realism of one sort or another has been, and continues to be, the default style for propaganda art connected to odious political figures and movements.

That said, Buchloh's essay is more than 30 years old, and a rising generation of what Donald Kuspit called "New Old Masters" are making works that are, in their intentions, distinctly anti-authoritarian. In political terms, there is a great deal of realism that is anything but "conservative."

The social issues that are at the heart of today's liberal politics -- including women's rights, LGBT issues, racial equality and secular identity -- are animating a wide swath of representational paintings. Many are not overtly political, but instead they focus on human dynamics and situations with an emphasis on the power of empathy. Rather than focusing on life's hardships, like the Social Realism of the early 20th century, today's Progressive Realists are interest in human identity in the context of social and political constructs. To put it another way, realists have taken on many of the view and projects that have pre-occupied Postmodernists, but do so using time-honored methods and media.

I'm including a selection of paintings below that illustrate some of the trends and values that I see emerging in this vein. Each image includes a quote from the artist meant to clarify and illuminate his or her personal concerns. 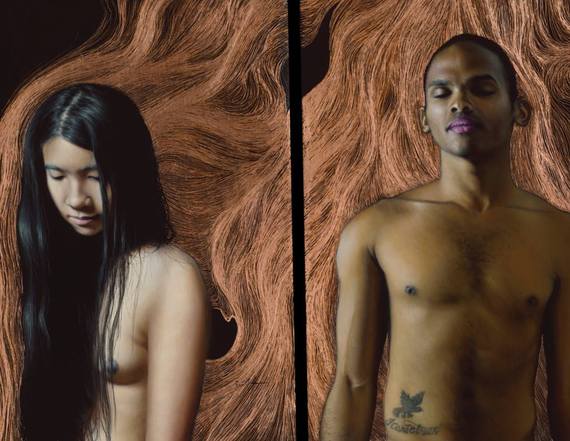 "A personal goal of mine (and maybe not a theme of the work per se) has been to gain a thorough understanding and connection with my model during my time working with them. During our photo shoot I don't ask them to pose, I don't direct them. Instead we have an hour-long conversation about whatever they want. The end result is thin slices of time that showcase the model in genuine moments. I find myself painting the details with a real desire to capture the model in a way that's true to who they are." 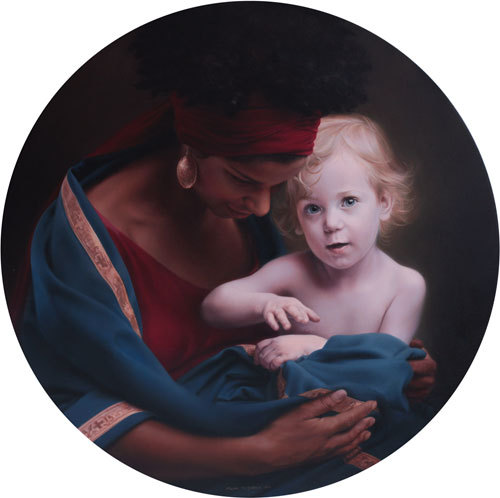 "It is a question whether contemporary liberal views are bringing a new perception of race equality since Christianity doesn't discriminate people by skin color or ethnicity. Of course, there is the history of colonialism that have consequences we are still aware of today. This painting could remind us on some of them..."

Steve Linberg, Nudity and Sexuality, charcoal and chalk on paper, 24 x15 in.

"In 2011, I was asked to show some figurative work in a show in Boston. I submitted four samples: three female nudes and one male nude. I was told by the organizers that the female nudes would be fine for the show, but not the male; the show was public and children might see it. I politely thanked them for their consideration and withdrew from the show. The work was a body, and I was not willing to separate out the male nude from the others. If female nudes were acceptable, males should be as well.

This generated discussion and controversy among the show organizers. After several weeks of back and forth, it was eventually decided that they would show it, but it had to be in a private gallery not visible from the street. This was the final compromise that the chair of the show would accept, after all of the other members had turned in favor of it.

It seemed to me that the chair's objection centered around an inability to separate nudity from sexuality, at least for the male figure: male nudes are inherently sexual (if not outright obscene), while female nudes may be purely decorative, particularly for male viewers.

I created this piece as a response to this controversy. I wanted to indicate that while there can be overlap between nudity and sexuality, there can be non-sexual nudity, and non-nude sexuality. As part of this statement, I wanted to invert the traditional paradigm of discretely covering the male nude while exposing the female, to further emphasize the point." 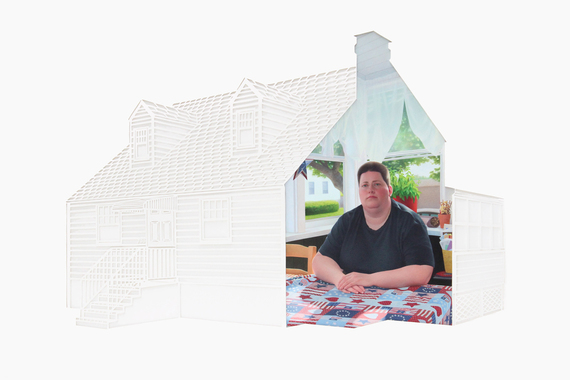 "Cornerstone is a portrait of my remarkable friend Stacey. Stacey lives with her mother, two siblings and young niece in their childhood home, because she knows that her income is needed to upkeep it. That Stacey chooses to remain at home in order to support her family reveals much about the type of person she is. The fact that she is an out, gay woman choosing to live in a traditional, working-class suburb reveals even more. I see my friend as a kind, noble and quietly heroic individual and I wanted my portrait of her to reflect that." 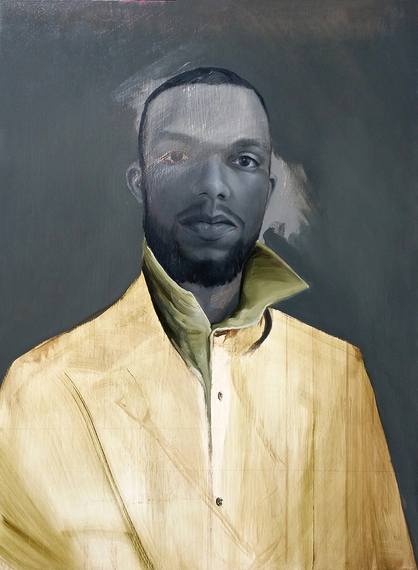 "While we are motivated by very different goals and aspirations, the question, 'What is the meaning of life?' seems humbly universal. My experiences prove this answer is rooted in the need for empathy -- an individual volition driven by the need for connection and feeling." 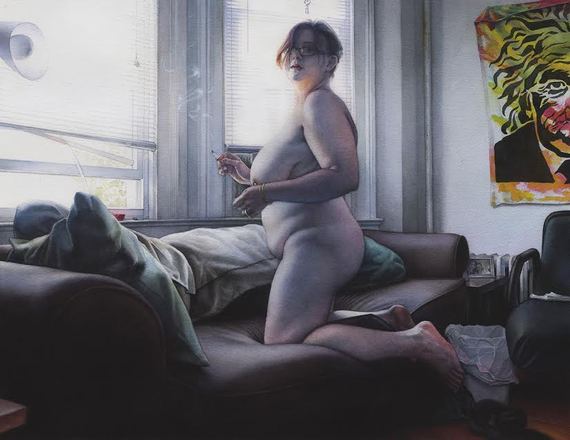 "I am greatly interested in examining identity and how it manifests in one's public and private personas. Much of my work deals with body politics, physical and metal health, gender identity, and sexual identity. My source material comes from interviews I conduct with the models about their personal lives and experiences. I work with them to showcase their narrative as a means to promote open dialog about the topics at hand and give a voice to those typically underrepresented in representational art." 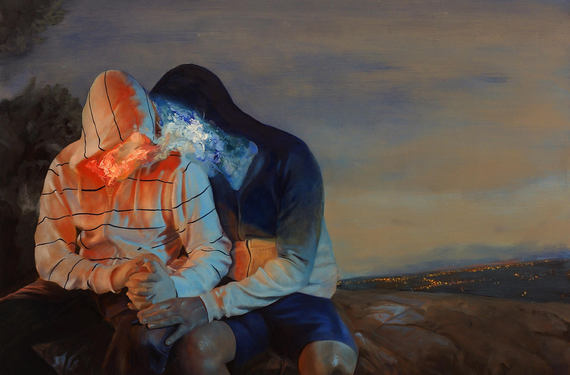 Jean-Paul Mallozzi's Familiars broadens his fascination with the human condition and the inherent, nuanced complexities of personal relationships, specifically intimate male relationships, which are often hyper-sexualized and informed by society's rigid and conflicting constructs of masculinity, sexuality and identity.

"We Come Here Often is a personal piece that highlights the emotional bond the couple shares between themselves over a quiet bluff overlooking a cityscape in the distance. The light is coming from both men's emotional states made visible and crossing over into each other merging together at that moment." 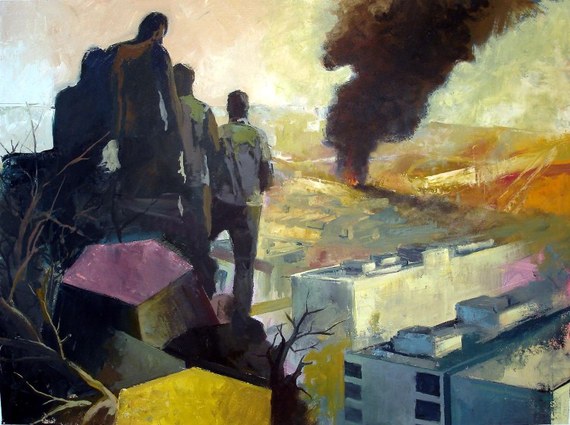 "I'm agitated about war, about how humans continue to interact with each other. I'm agitated by the philosophical implications of our warring, and I'm agitated that it seems inherent to our very existence to be war-like. How did we let things get this way? Why do we always seem to end up bludgeoning one another? What can we do to change? Why do people suffer? It all comes back to existential questions for me: questions of faith, questions of personal responsibility in the world.

The Omen (Group Upon a Height) is an image that could be pulled from any day of the last 3 or 4 years in our world. This scene could easily be of Beirut, Haifa, Kabul, or Baghdad. The figures - once again melded into their land, once again bearing witness - rise above their city to take in the view. The plume they see is smaller, more localized than some seen in other paintings of this series, but it is no less potent. It signals destruction in their world, in their lives, in their emotions, their beliefs, and their ideas."