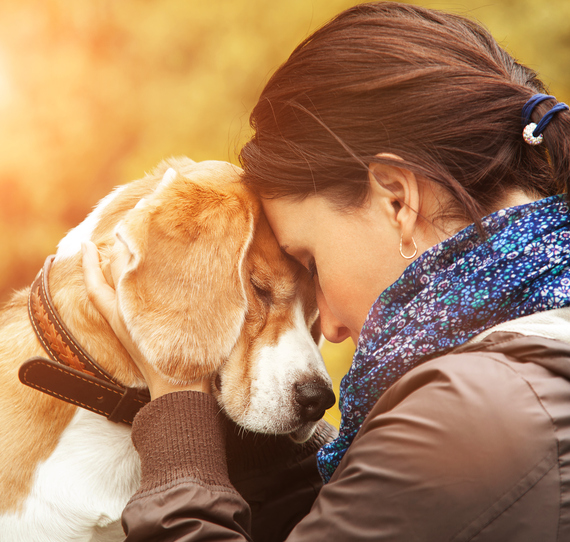 In celebration of the recent World Animals Day and the Feast of St. Francis of Assisi, the patron saint of animals and the environment, I dedicate this blog with much love and respect to all the creatures of the world.

Sweet, but what's that have to do with women and business?

Since the 19th century, we have played a central role in animal advocacy, and nowadays females are far more likely to volunteer for an animal welfare organization and are twice as likely as men to be vegetarians.

And with women enjoying unprecedented success at the highest levels of our professions, now more than ever we have influence over how we conduct ourselves as a society in terms of our approach toward economics, ethics, health, safety and stewardship.

Now back to business. First, some not so great news.

Every year in the United States about 10 billion animals -- that's 30 million cows, 106 million pigs, 8.6 billion chickens and more -- are raised for food in an industry dominated by factory farms. (Over the past 30 years the U.S. population has increased by 33% while its meat consumption has more than doubled). FYI, there are 65 billion animals crammed into factory farm facilities worldwide.

In the U.S., the animals produced now come from 2 million farms; in 1950 there were 6 million farms because the family farm was a large part of American life and animals weren't the mass-produced commodity they are today.

In case you haven't heard, the conditions of factory farm facilities are generally horrific. Egg-laying hens are crammed into cages so tiny they can't even spread their wings; sick animals are thrown onto a pile left to die a slow and agonizing death; pigs are kept in crates so small they can't turn around and their tails are chopped off sans anesthetic to prevent them from maniacally chewing on one another, and the list goes on.

Factory farms also pose threats to the environment and human health in order to maximize agribusiness profits. Climate change advocates state that meat production is one of the biggest sources of pollution. Animals are bred to grow unnaturally fast and large, and unnatural feeds, hormones and excessive quantities of antibiotics put humans at risk for chronic disease, obesity and drug-resistant bacteria.

There are troubles too of course for dogs, cats, laboratory animals, animals killed for fur, and wildlife, but because of their numbers, no one category of animals has such an overwhelming impact economically, ethically and environmentally than factory farm animals.

Now for the good news and some great opportunities.

Over the past several years, consumers, legislators, volunteers, some very special ranch owners, and most of all organizations such as the Humane Society of the United States (HSUS) and Farm Sanctuary, have made a tremendous impact on the lives of millions of animals. These positive changes also extend to human health, the environment and the economy.

For example, in response to consumer pressure, retailers and restaurants have been strengthening their animal-welfare policies, with companies such as Nestlé, Starbucks, and McDonald's recently committing to tougher standards for their suppliers.

The efforts of these organizations, businesses, volunteers and consumers should be applauded and appreciated. Making a buck just because you can may be the definition of opportunity and success for some people, but more and more individuals and corporations are realizing and embracing that there is another way - that plenty of money can be made without causing misery, sadness, unsafe conditions, damage and exploitation.

The notion of a "humane economy" has existed since the late 1800s and just recently has started to extend beyond its ideation stage. Staying with the farm animal theme, top investors such as Bill Gates and Twitter co-founders Biz Stone and Evan Williams recently invested big dollars into new companies producing fake meat and eggs; sales of plant-based meat alternatives is skyrocketing, exceeding $500 million annually; and the U.S. vegetarian market as a whole is a $2.8 billion a year industry.

As part of the conference, we had the chance to lobby on Capitol Hill about several different pieces of animal-welfare related legislation, all of which feature significant opportunities economically. Some of the bills we discussed include:

You can find out more about these pieces of legislation, their status and how your representatives vote here.

Even if you don't consider yourself to be "an animal person" I hope you see how the impact of animals far exceeds the lives of the individual creatures. Even if you don't really care much about what animals endure, I bet someone you know and love does care a great deal.

The hallmarks of a successful businesswoman, company, product, culture or society is the empathy we show others. And to be a true success, this care must extend to humans and nonhumans alike.

Maria Katrien Heslin is the Owner of Independent George LLC and Founder of Business Boostcamp, @boostcampbuzz