Joe Jonas teams up with Pepsi's "Live For Now" global campaign to help inspire fans around the world to live in the moment. Check out the following interview with Joe on how it will work... 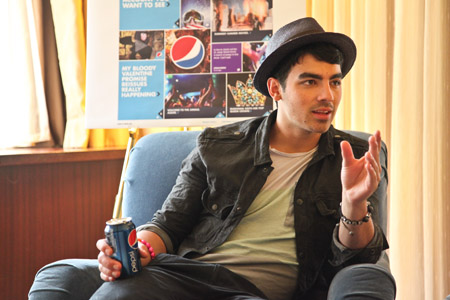 A Quick Conversation With Joe Jonas

Joe Jonas: It's been going really well. It's a pretty easy day, we've been running around, but it's been pretty good.

MR: Joe, how are you involved with the new Pepsi Pulse initiative?

MR: What are some of the "Live For Now" activities you'll be doing, what would a normal day of posts be like for you?

JJ: It can vary, it can be anything. Personally, I think it's going to be everything from keeping up with what's going on that's in the entertainment world that I really like to things that could be spontaneous twists, or it could be trying a new food that I've never tried before. It could be from anything to everything.

MR: Very nice. What about its association with Twitter? It's going to be a Twitter-ish, right?

JJ: Yeah, it's all platforms thrown together. Mostly, Twitter is where people can go on and Tweet and hash-tag this. But there's also a web site that's been created that going to be really cool for people to go to. My content is going to be on there, and there are other artists like Nicky Minaj, Katy Perry, and others that are going to be announced soon. It's going to have a bunch of different stuff, which will keep people involved and updated on what's going on in pop culture.

MR: Your fans would also be able to post, right?

JJ: Yeah, absolutely. They can post creative, interesting stuff that might even make it on the Pepsi page. Or I might re-Tweet it, depending on whether I really think it's cool stuff or a little bit different, just to be able to encourage them to keep active on it.

MR: It seems like Pepsi Pulse is trying to bring to people those things in pop culture that are relevant in the moment.

JJ: Yeah, I feel like that's always something that's vital for me and for young people. I think that's why this is so cool with Pepsi. It's very visual; there's always the difference between reading something online or seeing visuals and videos. It keeps you excited and educated and keeps you up to date with what's going on in your city or the world.

MR: You mentioned before about posting stuff that you like, such as concerts and music. What have you got your eye on lately? What are you listening to and what are you looking out for?

JJ: Right now I've been looking into the new Norah Jones record, which is truly fantastic, I really like it. I've been listening to this artist, Frank Ocean, who is really great. The Weekends are great, this DJ, a seventeen-year-old who's name is Madeon. I just saw The Avengers movie, thought it was fantastic, a really great movie and looking forward to the second one already.

MR: Yeah, I thought it was amazing too.

JJ: It was funny because I was like, "OK am I really going to love this film?" because it's just a lot going on, a lot of characters. But I was really shocked, blown away because I thought it was really great.

MR: My favorite thing about that movie is that every time a character was up at bat, it was their movie.

JJ: Yeah, literally they each had their own piece of the puzzle, it was so great. I was really happy to see that The Hulk looked really good in it, it made his character really awesome. 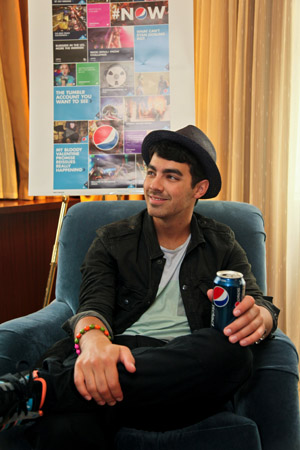 MR: Finally, right? So will there be other kinds of posts that you'll be making on Pepsi Pulse, like when you're working on something, will you be using this as your platform to try it out with fans?

JJ: Absolutely. I think it's a great way to keep people involved and showcase the new music that I'm creating with my brothers again and even share places that I'm traveling to.

MR: I was a little shy of asking that. You're working on your own stuff, but you're also working on projects as The Jonas Brothers?

JJ: Yeah, I just started up again in a studio with my brothers and we're just creating music right now. I'm excited to share it with the fans, the songs I've gotten so far, and it won't be too long before they start hearing stuff.

MR: So what about mentoring? Are you in a place in your life where you feel like your role is looking at some acts and discovering new music, maybe trying to help folks out a little?

JJ: Yeah, it's funny you say that. There are a couple of opportunities that might be a possibility for me to be in those kinds of roles. I find it funny to be the old guy on the block now that all these young artists are coming out, and I think I've gone through so much, everything from personal stuff to the music side of it. The wins, the defeats, and carrying on where you've been doing it for six or seven years now and we understand both circles of both sides, the good and the bad and what's going on. So the mentorship side of things has always been interesting to me.

MR: Where you guys mentored?

JJ: There were certain people who have said things to us that have really struck a chord. Everybody from Nick Carter from the Backstreet Boys, who said to me a long time ago, "Watch the people around you and their mistakes so that you don't make the same ones." I felt like that was really incredible. My dad has been a big mentor, musically and personally. He's a friend to me and as I'm older we've become closer friends now. Our relationships have changed but only for the better. He always said to us, "Live like you're at the bottom even if you're at the top." We still live by that.

MR: Beautiful. That leads to my traditional question, which is what advice do you have for new artists?

JJ: I think the biggest advice I have for new artists is know that all this can go away tomorrow and really respect the people around you and treat them right. This isn't an opportunity that many people have. Also, even though you might not have one, have a photographic memory if you can. There are small things from people you meet that you'll feel like, "Wait, I can't believe I didn't even stop to appreciate this moment."
MR: What is Joe Jonas' future?

JJ: My future is probably focusing on the band and being able to do everything I can right now to make the band bigger than it's ever been and continue to make music that I'm proud of. Then I think music and acting is something that I want to be involved in, or also internships for other artists, whether on my own label, or making projects for each of them. I love to create.

MR: Joe, thank you so much for your time, I really appreciate it.

JJ: Thank you, nice talking to you!

Grammy Career Day (May 8th) was especially nice to The Chenfeld boys Noah and Dylan, their having played to a New York audience that included Mayor Bloomberg and members of NARAS. Here's their latest video for "Under The Smoke."