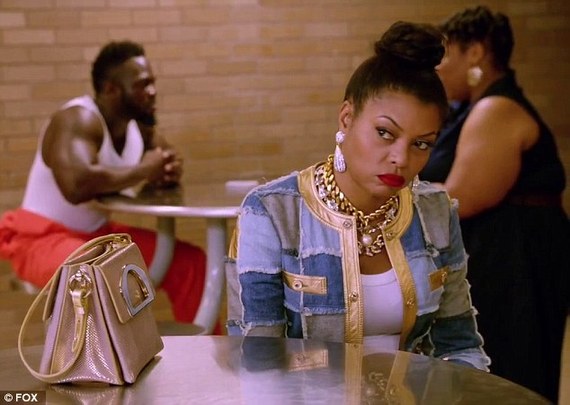 If you're active on any social media platform, a fan of Taraji P. Henson or just a breathing mammal then you know that "Empire" is in its second season on Fox network. For the few people that haven't heard of "Empire" I can tell you to think of your mom's favorite soap opera and add in radio friendly rap with a healthy splash of appearances by some of your favorite entertainers. Now imagine most of these individuals being portrayed by actors of color. Oh, and we can't forget the dosage of not so subtle reminders that this show airs on Fox network. This is an odd mixture that's hard for me to swallow. Yet that's not to say that I turn it down. Like millions of viewers I watched it last season and I may do the same this season. The best way to describe my feelings for the show would be to quote the lead character Lucious Lyons when he was talking to his ex-wife Cookie. In the middle of a conversation he pulled a Kanye and went from laughing to really serious in a three second span and said "I love and hate you in the same moment". That one line is an accurate summary of how I feel about the show. I love and hate it at the same time. If my commitment to this show had to be declared in a Facebook relationship status it would state "it's complicated."

Ten minutes into the season two premier I found myself cringing. The show opened up with a concert scene where Swiss Beatz, a prominent figure in the hip hop community was discussing the very REAL problem of mass incarceration of Black men in the U.S. Swiss Beatz's character passionately outlined the problem of mass incarceration to concert attendees that expressed their agreement with loud chants of "free Lucious" and "when will it end?" The scene consisted of large groups of young Black adults using their collective voices to express outrage about a social justice issue. Did this scene remind anybody else of the Black Lives Matter movement? Only problem is in this scene the concert attendees' anger about social inequality was being manipulated by powerful people for their personal needs. Oh, and the crowd was unknowingly advocating for the release of an actual murderer. While it may seem like I smoked a few puffs of whatever Kanye had before his last MTV speech, the truth is BLM movement is increasingly under attack by conservative Republicans. Depicting an image that mirrors BLM protestors being manipulated into advocating on the wrong side of the law definitely feels like a not so subtle cheap shot. Oh, and just in case they had bad aim and that shot missed a few folks then the scene where Cookie Lyon stated "what you did in Ferguson was good" to DON LEMON should have definitely landed. Fox makes no secret of what they think of BLM movement in terms of police brutality and I just can't help but wonder if this was another opportunity for the opinions of the network to be shared. Yet I still kept watching.

I continued to watch this episode for the same reason I watched last season. While this show airs on a network I intentionally avoid I can't help but appreciate the exposure many Black actors and artist are receiving. Last season just as I was about to turn the station I saw a Kehinde Wiley piece prominently featured. Starved for shows that include people of color in powerful positions, and a narrative that explores the pain of homophobia, I consumed the entire episode. And it made me sick. But I enjoyed it. And I thought it was corny. But it entertained me. I think the cast is talented and compelling. But I roll my eyes throughout the show. I want to scream about the crazy ass stereotypes but I'm afraid I'm judging my own people too hard. I know it sounds crazy. Hell, it feels crazy. The truth is I am really hungry to have a huge variety of shows with people that look like me that neither satisfy the respectability politics lover's appetites or fit the stereotypical drug dealer turned rapper with a wife named COOKIE type of role. I am starving for more. In the meantime I feel like Fox is serving a bunch of appealing appetizers on top of a dirty plate with rusty utensils. Every time I dig in I feel a little sick. It's the show I love and hate in the same moment. I'm kind of committed...but it's complicated.