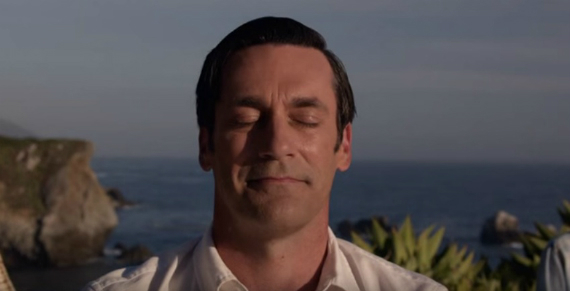 On Nov. 18, Empire aired the first of a three-episode arc that features Pepsi not just as product placement, but as a virtual guest star. Rising star Jamal Lyon (Jussie Smollett) has entered into an endorsement deal with Pepsi and agrees to appear in an ad for the soft drink. On this week's episode, the ad will air during a commercial break, right after a scene in which Jamal plugs the spot at an industry event.

Cue the outrage. Some critics have expressed disgust at the extent to which Pepsi has taken over the storyline; others are upset over Empire's decision to link a young, hip character with a product that promotes diabetes. The deal calls to mind the finale of Mad Men, in which Don Draper supposedly achieves enlightenment. There he is, meditating on a hilltop in khakis and bare feet. Then a bell rings; he smiles. Cut to the famous 1971 Coke ad in which a bevy of multicultural youth sings, "I'd like to buy the world a Coke" on top of a grassy hill. Don's smile is revealed to be the smirk of an ad man who's figured out how to move us to tears with a commercial for sugar water.

Coke didn't pay for that ad to air; no corporate suits influenced the episode's storyline. But I find myself wondering if that really makes a difference. As much as we may cringe over overt displays of corporate machismo like the Pepsi-Empire deal, there's a certain delight in spotting real-life products on TV, or in buying something straight out of a favorite show. It reflects our branded world right back at us. Because no money was exchanged, the vintage Coke ad feels far more benevolent than Pepsi's reported $20 million deal with Empire. It's the ultimate seduction.

There's one show currently airing its third season that brilliantly highlights this dilemma. On Comedy Central's underrated reality-show spoof Nathan for You, comedian Nathan Fielder plays a version of himself, a business school graduate who helps struggling small business owners. In one episode this season, he schemes to offer free labor to a struggling moving company by disguising the process as a trendy new workout regime. As part of the plan, Fielder had a promotional book published, called The Movement, which became a bestseller on Amazon -- just one instance of the show's stunts reaching beyond its own world and into viewers' pockets.

Nathan for You understands that consumption is a language we speak fluently. We buy pink to fund breast cancer research; we boycott products that come from organizations or regions we don't want to support. We'll happily open our hearts and wallets to a company if we believe in it.

But Nathan for You demonstrates the danger in giving in to this seduction. Fielder plays capitalism embodied: cold, calculating, socially inept. It's a running joke that no one wants to be his friend, that his only tool for human engagement is his business acumen. He's the anti-Don Draper. He's a manifestation of the idea that -- no matter how hard a brand may try to earn our love by integrating itself into our beloved primetime entertainment -- the market doesn't care about us. Or, as Don Draper might put it, "The universe is indifferent."

PHOTO GALLERY
Things We Love About "Mad Men"
Download
Calling all HuffPost superfans!
Sign up for membership to become a founding member and help shape HuffPost's next chapter
Join HuffPost

What Nathan Fielder and Don Draper Can Teach Us About the 'Empire'-Pepsi Deal
Things We Love About "Mad Men"
1 / 34
1. Jon Hamm/Don Draper
"Be slick. Be glib. Be you," Roger Sterling told Don in season four. He forgot "Be an alcoholic, womanising, advertising genius"... but no matter. For the fact remains: 'Mad Men' introduced us to Jon Hamm - and for that, all of womankind will be forever grateful.