To celebrate the 60th anniversary of the People's Republic of China under Communist rule and Mao's 1949 revolution, the Chinese will hold a military parade in Beijing on Thursday of unparalleled size -- 5,000 soldiers, 43,000 fireworks and a display of 52 new weapons -- followed by a civilian parade of 100,000 marchers and 60 floats, many chanting new nationalistic mantras coined by the Chinese government for the occasion.

For a nation that worships Mao, and the path of development and prosperity the Chinese people believe he charted, nothing less would do to commemorate its 60th anniversary.

But when it comes to the commemoration of China's 60th anniversary in the U.S., perhaps we could -- and should -- expect a little less.

Wednesday night in New York City, the Empire State Building will illumine its familiar spire with red and yellow lights in honor of Communist China. The Communism-themed color scheme will stay lit through Thursday night, much to the delight of China's consular officials, who were on hand for a ceremony in the lobby of the iconic building Wednesday morning, and to the acute dismay of the dozen or so protesters outside, and to many Americans who question whether honoring China's Communist revolution here is at all appropriate. 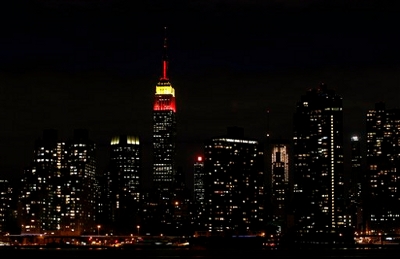 China's Consul General Peng Keyu, the main attraction at Wednesday's ceremony, offered kind words for the building, New Yorkers and the American people, before pulling a fake lever that lit up a fake Empire State Building. He told the crowd:

I would like to take this opportunity to express our appreciation to all the friends in the greater New York area for their support to China's development and the China-U.S. relations... I sincerely wish China, my motherland, continued prosperity. And let us work together for a brighter future of the Sino-U.S. relations, and a sustainable, peaceful world.

Here's the video of the ceremony:

American reaction to the Empire State Building's decision to honor the People's Republic of China has been fiercely, and almost unanimously, negative. To most Americans, Mao is a symbol of evil, his revolution a reign of terror, and his legacy the antithesis of how he's revered in modern China. Media reaction to the lighting has reflected America's discomfort with a Communist-themed Empire State building. U.S. News and World Report published an editorial Wednesday titled "The Empire State Building's Disgusting Kowtow to China," which asked:

Is this to honor Mao Zedong, whose euphemistically-named Great Leap Forward and Cultural Revolution led to the mass starvation and mass murder of 40-70 million Chinese, a death toll perhaps surpassing that of Adolf Hitler and Josef Stalin combined, and led him to declare, "China is such a populous nation, it's not as if we cannot do without a few people?"

The AP quoted New York Congressman Anthony Weiner as saying the lights should not be used to pay tribute to "a nation with a shameful history on human rights."

And Investor's Business Daily asked in a Tuesday editorial what many New Yorkers and Americans in general are wondering: "What is the Empire State Building thinking?"

I spoke with Han Shan, a HuffPost blogger and one of the protesters Wednesday morning outside the Empire State Building, who told me that there's no distinction between honoring the anniversary of the People's Republic of China and celebrating China's Communist party itself, which he described as a "totalitarian state that has killed 1.2 million Tibetans and countless Chinese people." When I asked Han who was responsible for making the decision to light the Empire State Building red and yellow, he said, "it's not transparent and we haven't been able to figure out how it happened... we imagine it was at the request of the Consulate."

Here's my interview with Han:

"ESB doesn't discuss the lighting process, but it is explained in brief on their website www.esbnyc.com."

No matter who is responsible for the Empire State Building "going Communist," as some have put it, when the spire glows China's red and yellow, New York City, defined by its most iconic structure, will be giving Mao, Communism, and the People's Republic of China a big pat on the back. As Mr. Gao pointed out to me, "this isn't the first time the Empire State Building has gone red and yellow." True. But it is the first time it has been done for Mao.

Students for a Free Tibet protesters outside the Empire State Building Wednesday morning:


The short concert in the lobby of the Empire State Building following the ceremonial lighting Wednesday morning: