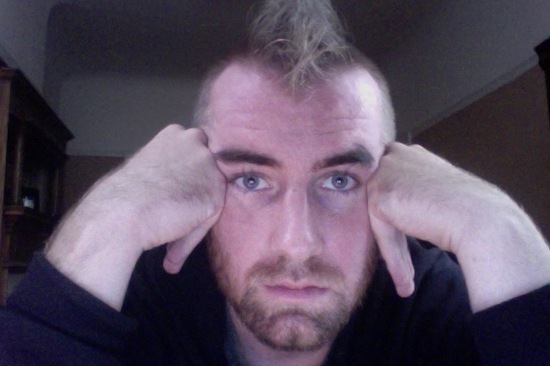 Right now I'm scared. I'm terrified. I have not had steady employment in over three years. I've burnt through my entire 401(k). I'm on food stamps. I've paid my last two months' rent on a credit card, and have no means to pay this month's.

For the life of me I can't seem to get a job. On average, I apply to about 10 a day. From copywriting gigs to my local grocery store, most inquiries go unanswered. For those jobs which I seem an impeccable match for, even garnering a form rejection letter feels like a win.

At 23 years old, I was making $74,000 a year -- considerably more than my peers. But it never felt right. I wanted to think that my years of hard work and scholastic aptitude had led me to a place of both personal and monetary satisfaction, but the truth of the matter is that nearly every morning when my alarm went off, the first words out of my mouth were "fuck me."

One job I had working in the marketing department for a famous consumer packaged goods company. When people asked me what I did, I was honest. I told them I sold fruit cups for a living. But sarcasm was never far away. I told them it's what I had dreamt about doing from the time I was 5: to one day be able to graduate from UC Berkeley so that I could eventually put high-fructose corn syrup into the mouths of kids across America.

The truth is that from the time I was 5 I've been creative to my core. I had been writing since I could remember: short stories, plays, poems, music, standup, everything.

The "calling" had been plaguing me for years, nipping at what little of my creative soul hadn't been bludgeoned to death by Corporate America: start your own company. Do things on your terms. Get back to what you love.

I had done this once before. I had a theater company in college. And by every measure of success one can imagine a theater company having, we were successful. Which isn't to say we made money. We lost lots of money in production costs, incorporation, etc. but we were producing engaging work that people were noticing and wanted more of. This would be the first time I would learn that while people respect and appreciate and want art, few people want to pay for it.

And once thrust into the real world, I became confronted with the absence of student loans and the reality of having to pay them back. And so began the rat race.

But with an economy plummeting towards a seemingly bottomless end, and after years of slaving in work environments rife with corporate politics and void of passion or creativity, I once again set off to form my own company.

Having put all of my income towards paying down student loans, I had no savings to speak of when it came to the actual upstart costs of a company. Being the entrepreneur I am, I took out credits cards and personal loans. We built a site -- a robust crowdsourcing platform for creative professionals to find work. Right up my alley. We had users. We had clients. We did not have funding. And just as soon as I had built the site, I had to shut it down, no longer able to bootstrap it until the right meetings with the right investors took place.

And once again I found myself flirting with Corporate America. But this time it would be different. The economy, at least in San Francisco, was showing some signs of improvement. Startups who were able to find funding seemed to be popping up more and more with a much "hipper" look at what work meant; gourmet meals, alcohol-laden fridges, and inter-meeting scooter rides were a given.

I ended up taking a job at a promising new startup in the recruiting industry (they've since tripled in size). I closed my first deal in eight days -- faster than anyone in the company. I was given nothing but positive feedback. While I wasn't doing something I was passionate about, I was back on track to financial solvency. Five weeks later, I was fired.

But here's why I think I was really fired, and I think it's the same reason it's made it so hard to get a job since.

In my interim of employment, when I was running my own company, I began hosting a podcast that looked to humanize those who worked in the sex industry. I launched Full Disclosure and began interviewing adult performers, escorts, sexologists, and the like. I wanted people to hear their story. And in doing so, I would reveal my own.

You see, I was a sex worker when I was in college. I had sex with men for money. If I held back on my podcast -- if I was unwilling to express my own vulnerabilities, if I was scared or ashamed to reveal who I was -- what did it say about those who I was asking to do the same? Nearly every person I've interviewed who's been a sex worker is exceptionally intelligent, well-rounded, and ambitious. But they've all used fake names because they're terrified of what may happen should their personal identity ever be revealed. They're worried they may never find work if they leave the sex industry.

I wanted to change that. I decided to lose the pseudonym and come out publicly about being a straight male who was a gay escort. I wanted to show the world that sex workers can be educated, intelligent, well-adjusted people. People who went to Berkeley. People who worked at Google.

And now that information was out there, at one with the foreverness of the internet. And it was googleable. And that's why I think I was fired.

Just as the podcast was growing in popularity, I began running out of my severance money. I had contracting gigs here and there, but nothing stable. I decided to take another risk -- and staying true to my brand of staying true, I went back to my roots in writing and launched a dedicated Full Disclosure website using the retirement funds from my 401(k).

On the site's most trafficked day to date, we received 19,678 unique visitors. By media company standards, that's nothing. By independent blogging standards, that's huge. I made $9 in Adsense revenue. I bought a burrito.

I receive emails and voicemails encouraging me not to give up, that one day a break will come, that my writing is inspiring and funny and intimidatingly raw. But when I press about career opportunities with these people, the phone calls go unreturned.

I applied for a copywriting job recently. The company was looking for someone with a popular blog following, who performs standup comedy, and has sales and ad agency experience. I received a form rejection letter. Knowing that I was a perfect candidate for this role, I wrote back and pressed the recruiter for more details.

"You're a phenomenal writer, but we need someone who can write ads," I was told. Do they truly believe that a phenomenal writer is incapable of writing ad copy, even at an entry-level? Of writing company blog posts? Or is it that no one wants to take a risk that at the hands of Google that their brand may be associated with a sex worker, with someone who speaks so openly not just about sex, but about the intimate highs and lows that we all go through?

When you've been unemployed long enough, even in the context of your own entrepreneurial pursuits, you begin to feel untethered. You feel like you're floating further and further away in a sea of destitute, away from the possibility of being rescued by your own means, and eventually, even the stranglehold of a corporate lifesaver seems comforting, on a ship that you jumped from long ago.

I've stayed true to myself, and I can say unequivocally I have no regrets about that. But rent looms. Every day Google, Facebook, and Apple shuttles stop in front of my house, dropping off legions of 20-somethings freshly fed their gourmet meals and stock options. Gentrification abounds in this city, unaware of the people and culture it's displacing. A one-bedroom apartment four blocks from me goes for $4k a month, and this city isn't getting any better.

Writer, podcaster, and comedy nerd based in New York City.