By Gregory Watson and Ben Hodgdon

Gregory Watson has led numerous projects related to climate change, forestry, climate-smart agriculture, renewable energy, energy efficiency, and remittances for the Multilateral Investment Fund. He has a master's degree in law and diplomacy from the Fletcher School at Tufts University.

When most people think about climate change, the first thing that comes to mind is the burning of fossil fuels for energy or transport. Rarely are forests considered. But they must be. The deal struck at the Paris climate change summit (COP 21) in December 2015 confirmed this. Forests and forestry, long a side note to larger conversations about reduction of emissions from energy supply and use, were topics of increased focus and discussion.

The reason is clear: If the world is going to limit global warming to 2 degrees Celsius, the focus cannot solely be on fossil fuels. We must also reduce emissions from the land sector--above all by stemming deforestation. Globally, the Center for International Forestry Research estimates that forests absorb 2.6 billion tons of carbon dioxide (CO2) per year. This is about one-third of the carbon dioxide released from the burning of fossil fuels. At the same time, deforestation and land-use change accounts for nearly 20% of all greenhouse gas emissions--more than the world's entire transport sector.

The importance of forests in climate change mitigation strategies is particularly clear in Latin America and the Caribbean, where approximately 46% of land is covered by forests, according to the UN's Food and Agriculture Organization. Forests in this region act as important carbon sinks, sequestering 440 million tons of CO2 equivalents. And conversion of forests to other uses was the main source of greenhouse gas emissions between 2001 and 2010 in the region, averaging 1.9 billion tons of CO2 equivalents.

At the Paris summit, countries from Latin America and the Caribbean submitted national climate action plans detailing their commitments and targets for emissions reductions. Many of these national plans include specific targets related to the protection of forests, and the sustainable use of forest resources. While there are many mechanisms available to conserve forests, one of the most promising is the development of community forest enterprises. 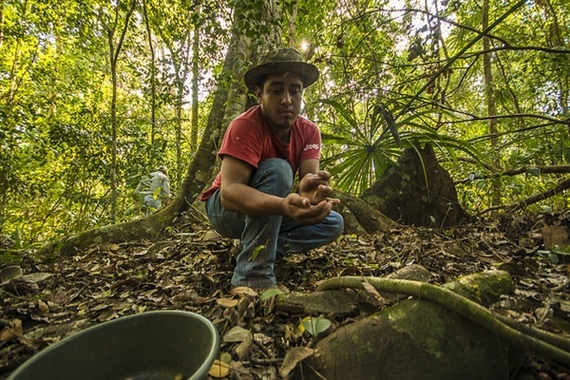 Local control is the best protection for forests

If community forestry sounds like a "boutique" strategy, think again. Forests where local communities and indigenous people have legal or official rights sequester 37.7 billion tons of carbon. That's 29 times the annual CO2 emissions of all the passenger vehicles on the planet. Today, about one-third of tropical forests are under some form of local community control, and that share is growing. Latin America and the Caribbean is the trend's epicenter. But it's also taking hold in tropical regions of Africa and Asia. Thus, lessons from the Americas are of particular importance: Evidence demonstrates that local people protect forests best, especially when they build up enterprises based on sustainable forest management.

For example, northern Guatemala has one of the highest rates of forest conversion in Latin America and the Caribbean, mainly from illegal ranching. In the 5 million acre Maya Biosphere Reserve, the largest protected area in Central America, about one-third of the area is under strict protection. Much of this area still experiences considerable deforestation, even above regional averages. But areas under community management certified by the Forest Stewardship Council for sustainable harvesting of timber and other forest products do better. Studies show those areas have near-zero deforestation, conserving about a quarter of the Reserve's forest cover, while driving local economic development. A flagship carbon project run by local communities called Guatecarbon--supported by the Rainforest Alliance and the Multilateral Investment Fund (MIF) of the Inter-American Development Bank Group--is nearing validation according to international standards. It is estimated that sustainable forestry will result in a net carbon benefit of 40 million metric tons of carbon dioxide equivalent over 30 years.

Such outcomes are remarkable. But to achieve them, community forests need to be empowered with real rights over high-value forests, and supported to build competitive, socially just enterprises. Only in this way can their operations be profitable enough to withstand the pressures driving deforestation, and allow communities to thrive.

Working with the support of the MIF and other donors, the Rainforest Alliance has helped hundreds of community forests and local enterprises understand and overcome the barriers they face. Rainforest Alliance has documented many cases in Latin America and the Caribbean where community-managed forests were both profitable and sustainable. But the group also found cases where large areas of forest were lost after communities obtained title to them, for example in Nicaragua's RAAN, where forests titled to indigenous communities were not given sufficient support to stand up to the internal and external pressures to deforest.

The lesson is that communities need technical assistance and, critically, access to finance to defend their land rights, establish stronger governance, and realize sustainable forest management and competitive enterprises. With appropriate tools, community forestry can be as effective, or even more effective, than public management in conserving land.

As development organizations ponder how best to support community forestry, it is clear that, in addition to technical assistance, risk-sharing products such as guarantees and medium-term financing are needed so that local financial institutions feel secure in piloting new lending products. Over time, lending facilities at the national or regional level could be developed that leverage funds from the Green Climate Fund, bilateral donors, or equity investors.

The evidence shows that community forestry models make sense--it is now up to the development community to help realize their potential.

Ben Hodgdon is director of forestry for the Rainforest Alliance. Based in Richmond, Vermont, he oversees the organization's global work in forestry technical assistance, with a focus on community forests and local enterprise development.