It is said that change is the only permanent thing in the world. That is, until you reach Karahal in Madhya Pradesh, India. Time has stood still here. The tribal community of Karahal is adversely affected by abysmal poverty, malnutrition, lack of livelihood resources, water shortage and high rate of under-five mortality. Village health centres are defunct and schools have poor infrastructure and education facilities.

This is one of the most backward districts of Madhya Pradesh with only 15% of the villages connected by roads. Agriculture is the main occupation and majority of the people are landless laborers and marginal farmers who migrate seasonally in search of work. In this village, 80% of the girls here cannot attend school because they have to look after younger siblings, contribute to the household income, by or are married the young age of 13. The region has the lowest literacy rate in the entire state at below 20%. 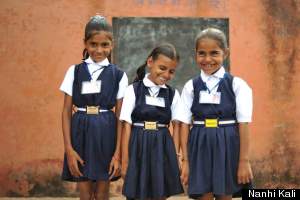 In spite of these harsh and unfavorable circumstances many young girls, who are part of the project "Nanhi Kali - for the girl child" supported in partnership with Johnson & Johnson, are driven to bring about a change. Bhavna is one such teenage girl from a remote village of Chainpura in the Karahal block of Sheopur district who with determined eyes says, "I want to be a doctor when I grow up and treat the people of my village."

A first generation learner, Bhavna was not keen to attend school. Her parents' poor financial condition as agricultural laborers made it difficult for her to complete basic education, let alone think of a career or financial independence. They had been farmers for generations and it was beyond anyone's imagination to be anything else. They are a family of four who live in a thatched house made of mud which leaks rain water during monsoons. Though herself a child, Bhavna is adept at cooking, fetching water and caring for babies. She looks after her baby sister while her parents go out for work. She could thus hardly get any time to come to school.

That is, until she became a Nanhi Kali. As part of the Nanhi Kali program she received support
in the form of a material kit which comprised of uniforms, school bag, shoes socks etc. to enable her to go to school with dignity. She also receives academic support through a 1-2 hour class conducted before or after school hours called the Academic Support Centre, where concepts in math, science and language are taught to bridge gaps in learning and enable children to attain grade specific competency levels. The teaching methodology includes the extensive use of innovative teaching tools and activities such as storytelling, group games etc which make learning not only meaningful as well as fun. The Nanhi Kali team also works with the parents and community to sensitize them on not only gender equity but also issues related to adolescent health & hygiene. 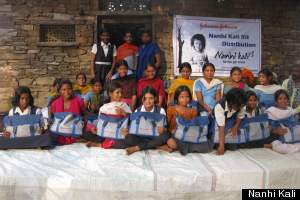 Bhavna is now the first proud member of her family to learn how to read and write. Not only has she maintained her attendance in school but Bhavna has also proved herself in her studies. From 42% in 2008-2009, her learning levels improved to 75% in 2011-2012. Just like Bhavna, the Johnson & Johnson partnership is reaching out to more than 1000 girls as a part of their Holistic Development Project in the Karahal Block.

The importance of girls' education cannot be stressed more. Education enhances lives. It ends the generational cycles of poverty and disease and provides the means for sustainable development.

A high-quality basic education better equips girls with knowledge and skills needed to adopt
healthy lifestyles, and to take an active role in social, economic, and political decision-making
as they transition to adolescence and adulthood. We believe education will also radically change the perception that girl children are burden, to the realization that girl are potential leaders and building blocks of the society. This is true empowerment!