I'll never forget the day I dropped my middle son off at college. He was my "easy" child, and I was having a really tough time as he'd decided to go to a university six hours from home (my other two boys attended nearby colleges so the separation wasn't quite as dramatic).

As I stood sobbing at the car in the parking garage after we'd unloaded his belongings and attended all the first-day-at-college/separation events, Sam pulled a Lifesaver out of his pocket. "Want a candy?" he asked, giving me a big, rib-crackling hug.

"Whoa!" I thought to myself, tearfully accepting his offering. Total role reversal. Isn't offering a treat and a hug supposed to go the other way around? In addition to the angst caused by the fact that my son was leaving home was this new twist: It was possibly the first time it seemed like he was the grown-up and I was the kid.

Not long after, I was practicing my yoga handstand against the front door (the only free wall in my cluttered house) when my eldest son (who works in the computer world somewhere in Manhattan) happened by. "Stop that!" he admonished. "You might hurt yourself!"

Hmm, those words had a familiar ring. It sounded like something I might have said when this same young man was a child diving headfirst down a slide or climbing a tree in the backyard. 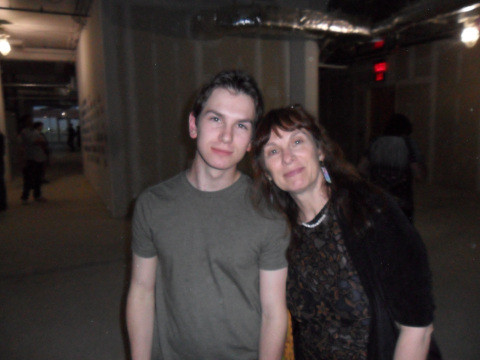 The writer with her youngest son, Ben.

There's probably a point in every parent's life when our kids start telling us how to behave. Suddenly, the children who were once so busy with their peers and activities, their job or their studies, look at us and realize we, the parents, are doing some mighty foolish things and they'd better warn us. In fact, I remember telling my own aging mom that she'd better stop drinking soda (which she loved) and eat more kale (which she detested). I probably made my mother's advancing years rather miserable with all my instructions and directions. Actually, I think I was a lot bossier with her in her old age than she ever was with me when I was a child.

Once I started noticing this new phenomenon with my sons I got a little freaked out. My kids thought my husband and I were "crazy" to be driving a 13-hour stretch when we recently went down south to visit my sister (who, btw, at 70 is just starting a new career). "Have a safe trip," Sam said, calling me on my cell during our voyage, "and be careful; there might be snow when you go over the mountains!"

Be careful of the snow? Since when, I wondered, do my kids tell me to be careful? Not long after, I went to the mall with my youngest son, a college senior. He grabbed my elbow as we negotiated the parking lot and warned, "Watch out for cars!"

Now, hey, let me be clear: I am not a doddering old woman. I am a pretty fit yogini who can do an inversion with aplomb. So why the heck, I wondered, are my boys treating me like an octogenarian (never mind that their grandmother on their father's side is an octogenarian who still does yoga, drives, works and travels)?

At first, I was amused. Then baffled. Then, I guess, a little insulted. Until I thought back to my own mom and remembered that the reason I started bossing her around was just because I cared about her and fervently hoped that she would live forever.

I'm happy that they care; actually, I'm quite touched. But it's payback time, and I don't intend to be any less naughty than they once were.

PHOTO GALLERY
10 Things to Look Forward To As An Empty Nester
Download
Calling all HuffPost superfans!
Sign up for membership to become a founding member and help shape HuffPost's next chapter
Join HuffPost

Role Reversal: When Kids Are The Grown-Ups
10 Things to Look Forward To As An Empty Nester

1 / 10
Your House Is Clean
Gone is the detritus of your children's lives scattered here and there, carelessly flung about and forgotten. Your bathroom towels will stay hung neatly on their bars, the dishes are placed in the dishwasher instead of left to sit next to the sink. Beds remain made, floors remain clean, clothes are neatly put away. Mystery spills vanish, and you never wake up to a mess. Who knew it could be like this?
<a href="http://www.flickr.com/" target="flickr">Flickr:</a> <a href="http://www.flickr.com/people/tachyondecay/" target="flickr"> tachyondecay</a>