From the get-go, economic globalization has been a scheme to transfer money from workers to corporate executives and stockholders. Globalization was never intended to spread the wealth, but to concentrate the wealth. And for decades, it has been doing that superbly in America.

So, while consumers save pennies, the workers lose dollars. But how long can this continue? The Soviet Union was once described as a nation that produced products for $1.01 and sold them for $1.00. We can't continue on this path of saving pennies and losing dollars.

Yet, we seem powerless to reverse this nasty trend shrinking the middle class and undermining our democracy. Powerless, not merely because our elected officials are bought -- bought not crudely and directly, but slickly to warp their thinking -- but also because of a complicit media that has been warped and bought . When your media is warped you know you're in deep trouble.

Whenever public polices seek to transfer wealth from the wealthy to the poor in America the mainstream media is all over the issue. Say, a proposal to tax the rich so the poor can have health care insurance. Yet, when laws are passed to create an economic system to transfer wealth from American workers to their corporate bosses the mainstream media are first cheerleaders and then hardly interested -- hardly interested in the extensive human costs and hidden social costs.

But it's not all black, so hang with me. There is light in the American darkness.

The traditional media is on life support and investigative reporting is dead and the national dialogue is running on low-grade information -- a flash of this or that, silence on critical events, indifference about important truths. Did the media do a good job in explaining Iraq? Health care reform? Globalization? Just what has it covered well? This is low-grade media. Yet, a vigorous media, not new but growing, is slipping into this information void. This is the light in the American darkness.

Free of the dumbing-down demands of the profit-making media and the narrow restrictions of the internet, this media is digging for facts, reporting true costs, exposing the self-interest hiding behind the mainstream media's "laws" of the marketplace, and reporting all this in-depth which is worthy of thinking adults. Yes, worthy for a people to govern themselves. A new wave of independent documentary filmmakers is doing what our corporate media is not doing: giving Americans high-grade information.

The Red Tail, co-directed by Melissa Koch with Dawn Mikkelson, is a thoughtful, factually and emotionally honest, independent film for thinking adults. It's media for democracy! 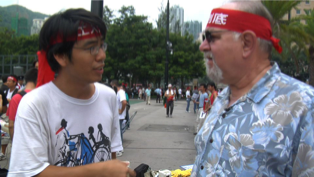 The Red Tail is the story of a Minnesotan airline mechanic who loses his job to outsourcing and then travels to Asia to meet his replacement workers. In an odd, interesting way, this documentary is an extended home movie, as daughter Melissa with camera follows her father to the picket line, to union meetings, to the kitchen for family discussions, and to Hong Kong. The result is a unique intimate portrayal of a union family being battered by the global system.

The father, Roy Koch, and 4,400 aircraft mechanics went on strike in Minneapolis to keep their jobs from being outsourced overseas. The strike failed and their jobs were shipped to Hong Kong. While the American mainstream media embraced the story line that the outsourcing of Northwest Airline's aircraft mechanics was an economic necessity, filmmaker daughter Melissa gives a much more complex story, one that details the human costs, and questions where the present system is taking us.

As for the winners, those Hong Kong mechanics, there are dark clouds on their horizon. Soon their jobs, it appears, will be outsourced to Mainland China.

This goes to the heart of economic globalism: capital perpetually flowing to where labor is presently cheapest. Replacement workers are themselves replaced by new workers. This endless movement of capital seeking the cheapest labor leaves in its wake economic and social disaster. Today disaster in America, tomorrow disaster in Hong Kong, next year disaster in Mainland China, still later disaster in....

The Red Tail is a gripping story with fascinating insights into the effects of globalism on the family. Uprooted from job and economic security, with self-esteem and self-confidence assaulted, the results are not better workers and better citizens but more insecure, vulnerable workers and citizens, some of whom are personally, and economically, crushed. And you can't build or keep a good democracy with crushed and insecure citizens.

At the same time, The Red Tail gives us insights into the workings of globalism, a greater understanding of the large economic picture. Filmmakers Melissa Koch and Dawn Mikkelson have produced a personal story in a world context. They have given Americans a high-grade documentation of a global wrong in American society that is attacking the very fabric of our society.

For all those families struggling with the disastrous effects of economic globalism, with a global system that does not speak to their concerns or address their fears, The Red Tail is your film. For those not victims of globalism, at least not yet, The Red Tail is your ticket to understand how your country is being shaped by forces beyond our political control. It will make you not only smarter, but also more sensitive and compassionate.

The Red Tail can be rented and purchased on Amazon