"[Neoconservatives] always continue to sort of lurk in the framework and look for opportunities to animate their crowd and bring in their fellow travelers.." - Steve Clemons, head of the American Strategy Program at the New America Foundation in The Nation, March 18, 2010

The chance for neoconservative activists to "animate" the true believers came with Israel's deadly flotilla raid on May 31, and they certainly ran with it. "We Con The World," that satire video suggesting that the real mission of those on board the Mavi Marmara was to aid terror, was produced by Latma, a media site run by Caroline Glick, an editor at the Jerusalem Post. But it's her other title that's more relevant here: Senior Fellow for Middle East Affairs at the Center for Security Policy. Glick launched Latma through the CSP, which she says fully funds its operations.

CSP is the think tank founded by Frank Gaffney, who was also a founding member of the effort known as the Project for the New American Century. PNAC, in a letter to President Clinton in 1998, called for the removal of Saddam Hussein.

Gaffney is one of the dozen or so members of what Janine calls in her book Shadow Elite the "Neocon core," the players who successfully pressed for the war in Iraq. Neocon core members are longtime ideological allies who used their interlocking relationships (see the chart below) across government, think tanks, media, businesses and borders to push forward their vision of asserting American power, and firepower, to remake the Middle East. And enmeshed with this worldview is an investment in defending Israel. 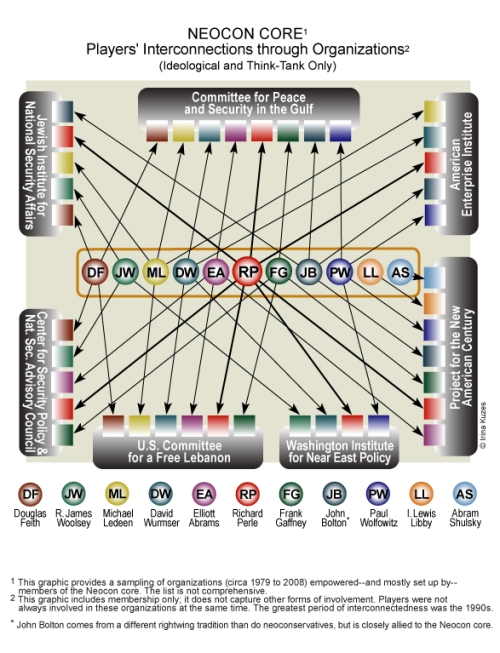 One might hope that the Neocon core has been chastened into silence or at least circumspection by the various failures of their grand vision for Iraq, what some critics have called "foreign policy malpractice."

Not so, says Stephen Walt of Harvard's Kennedy School of Government:

They are effectively insulated from failure...Even if you've totally screwed up in office and things you've advocated in print have failed, there are no real consequences, either professionally or politically. You go back to [the neoconservative-populated think tank American Enterprise Institute] AEI and [neoconservative magazine] Weekly Standard and continue to agitate or appear on talk shows as if nothing has gone wrong at all. -Newsweek, Jan. 22, 2010

And agitate they have in the past 10 days, defending the Likud-led Israeli government, blasting the White House and Turkey, and warning about Iran. Here's a quick round-up of what some core members and groups that played key roles in the Iraq war push have been saying.

Joining the Neocon core in its full-frontal defense of Israel - Liz Cheney, the former Vice President's daughter and State Department official under George W. Bush. As Steve Clemons has argued, she may be "more of a neoconservative than her father..." (Vice-President Cheney, who collaborated with the core, is seen as more of an "aggressive" or, in politically correct parlance, "assertive" nationalist.)

Her platform these days: the advocacy group Keep America Safe, which she founded last fall with help from leading neoconservative William Kristol (still another signer of the 1998 PNAC letter). Here's some of her statement on the Israel raid, which she reiterated last Sunday on ABC's "This Week".

President Obama is contributing to the isolation of Israel, and sending a clear signal to the Turkish-Syrian-Iranian axis that their methods for ostracizing Israel will succeed, and will be met by no resistance from America.

Cheney's message at Keep America Safe adheres to current neoconservative dogma - pushing a constant state of emergency against the threat of terrorism, linking American interests inextricably to Israel, invoking the Holocaust, emphasizing a belief that America has a unique and indispensable role in the world of nations.

And like her fellow traveler Caroline Glick, she is no slouch in the showmanship department. Keep America Safe caused an uproar this spring by targeting unidentified Justice Department lawyers who had previously represented terror detainees - asking in an ad, "who are the al Qaeda Seven?" and "Whose values do they share?" Cheney might have thought this was one of those chances to "animate" supporters, but it seemed to backfire, with even GOP stalwart Ken Starr calling her move "out of bounds" and "very unwise."

Cheney and much of the Neocon core also run the risk of backfiring in terms of Israel. Despite JINSA's insistence that Israel is a security asset to the U.S., Anthony Cordesman, a distinguished foreign policy and military expert, last week argued that the U.S. must ask itself whether Israel might now be a "strategic liability." His commentary came out of the centrist Center for Strategic and International Studies. Stephen Walt, well-known for tangling with neocons and the Israel lobby, said last week that it is Israel's most fervent "friends", not President Obama, who are doing damage to their own cause. His message: they need to temper their unquestioned support, or risk letting their "misguided zeal" drive Israel "down the road to further international isolation."