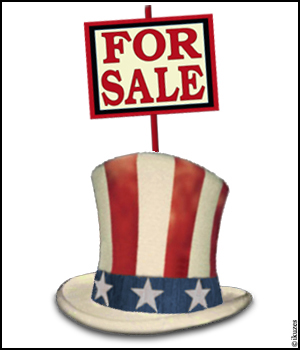 This is the second of a Shadow Elite series, investigating the game-changing effects of government contracting on the most vital government functions.

WikiLeaks calls its massive document dump the Afghan war diary, and while the coverage has focused primarily on the role of U.S. troops, they are not the only protagonists to be found. Some of the lead actors in the incident reports are (mostly) Afghan contractors hired to support the war effort, whose work and fate go largely unacknowledged. Salon last week found dozens of incidents involving contractors - one worker decapitated, two others with their legs blown off - that the Pentagon never reported, because, Salon says, the Defense Department does not even track the names of slain contractors.

The fact that the Pentagon gives contractors a low profile shouldn't obscure the enormous impact these workers have on the conduct of the war, both on the battleground and in more mundane roles back in the U.S., and the thorny challenges of managing them effectively. Janine studied the explosion of government contracting as part of her research for her book Shadow Elite and in a follow-on study (supported by the Ford Foundation), Selling Out Uncle Sam: How the Myth of Small Government Undermines National Security, soon to be released. Janine's conclusion is that in the area of defense (and beyond), there is not enough oversight to ensure that contractors are not influencing policy, jeopardizing security, engaging in wasteful or ethically-conflicted activities, and complicating an already chaotic battlefield environment.

The contractors are doing far more than ferrying supplies and manning security checkpoints. Contractors who carry out (or closely support) inherently governmental functions - the work so fundamental to the public interest that only federal workers should conduct - are firmly entrenched. They are providing intelligence analysis, program management, engineering, and technical support for program offices, and data and analysis on which government officials base their decisions on awarding further contracts. Web sites of contractors working for the Department of Defense have also posted announcements of job openings for analysts to perform functions such as preparing the Defense budget. One contractor boasted of having written the Army's Field Manual on "Contractors on the Battlefield."

As the number of contractors has ballooned, the number of civil servants available to oversee them has not (a trend that is government-wide, not just in the defense realm). The contracting business boomed under President George W. Bush, while the "acquisition workforce"--government workers charged with the conceptualization, design, awarding, use, or quality control of contracts and contractors--remained virtually constant.

This leads to an information deficit for those trying to oversee contractors and the consequences of that are troubling: it is much harder for government to ensure that a contractor's first priority is the public interest, and not the company's bottom line. As the Government Accountability Office's director of acquisition and sourcing management reported:

At this point, DOD does not know how well its services acquisition processes are working, which part of its mission can best be met through buying services, and whether it is obtaining the services it needs while protecting DOD's and the taxpayers' interests.

For example, one foreign-owned contractor appeared to have had access to U.S. classified information for at least six months before a protective measure was implemented. Moreover, Defense neither centrally collects information to determine the magnitude of contractors under foreign influence nor assesses the effectiveness of its oversight so it can identify weaknesses in its protective measures and make necessary adjustments. In 2007 the GAO added a new category to its high-risk list: "ensuring the effective protection of technologies critical to U.S. national security interests."

Lack of contractor oversight may well cause damage on the battleground as well: the GAO found that "problems with management and oversight of contractors have negatively impacted military operations and unit morale..." One glaring case of that can be seen in the contractor CACI, whose employees allegedly participated in Abu Ghraib prisoner abuse. The nature of the contract meant that while the Defense Department enlisted CACI, it was the Interior Department, better known for its management of national parks, that was actually responsible. During their investigation, Interior's inspector general found that CACI's contract was for technology, not interrogation services. Interior, not surprisingly, had little capacity to monitor CACI. And army officials who were supposed to oversee CACI "for the most part, lacked knowledge of contracting issues and were not aware of their basic duties and responsibilities in administering the orders," the GAO determined. The result was de facto governing by contractor.

John Nagl, president of the influential think tank the Center for a New American Security co-authored a report on wartime contracting and zeros in on how difficult it is to navigate this murky terrain of battlefield contracting:

The very existence of private contractors inserts a profit motive onto the battlefield; their primary responsibility is not the national interest but rather fulfilling the terms of their contracts. Contractors are not in the chain of command; they can be expected to fulfill their contracts but not ordered to do so in the same fashion as military personnel. Contractors are not subject to the same discipline and order procedures that govern U.S. troops. Failure to follow orders can result in criminal prosecution for military personnel, but this is not true of civilians. The contractors, rather than commanders in the field, are responsible for ensuring that their employees comply with laws and orders and commanders on the ground repeatedly express frustration with their own lack of knowledge regarding contractor activities - or even presence - in the battlespace.

Nagl urges better integration and more oversight because contractor involvement on the battlefield is not going away. It is promising, then, that Rear Admiral Kathleen Dussault has recently been in Kabul, commanding Task Force 2010, a joint military/civilian team of auditors and investigators which is "following the money" to ensure that contractors are not actually destabilizing Afghanistan. And not a minute too soon. As Wired's Danger Room reported recently:

...a congressional report..has found that Afghan, U.S. and Mideastern trucking companies who have a piece of a $2.16 billion logistics contract with the military pay about $4 million every week in protection money to warlords and Taliban insurgents.

That's taxpayer money, going into the hands of the very people attacking U.S. troops and the contractors who risk their lives for a paycheck. 260 of those workers took that risk and lost over the last year, and their names will likely never be known.