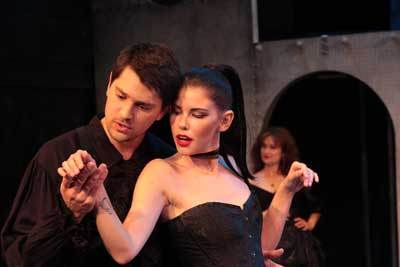 Although Pierre Corneille is known as the father of French tragedy, he did write several comedies, including The Liar, which was produced in Paris in 1643. While his comedic writing was never on the level of Moliere's, it does admirably reflect the farcical style of French comedy. A new adaptation of the play by David Ives, which premiered at the Shakespeare Theatre Company in Washington, is currently running at the Antaeus Theatre in Los Angeles.

Following the farcical formula of the era, Corneille's play focuses on Dorante (Graham Hamilton), an inveterate liar who becomes so tangled in his own deceptive web that he ends up fooling himself. Falling in love alternately with Clarice (Kate Maher) and Lucrece (Joanna Strapp), Dorante manages to anger his friend Alcippe (Joe Delafield) and his father Geronte (Peter Van Norden).

Under the direction of Casey Stangl, the story moves along briskly enough, with the expected twists and turns that are de rigeur in French farce. However, the one novel aspect of the production - Ives' adaptation - is somewhat plodding. Ives chooses to sprinkle the verse play with contemporary rhythms and references that are occasionally amusing, but more often jarring and a bit forced. As a result, the farce seems pushed rather than flowing naturally from the language and situation. It is as if the playwright is forcing the comedy on the audience, rather than letting it blossom on its own.

The performances are uniformly fine. Hamilton is energetic and winsome as Dorante, while Maher and Strapp are delightful in their roles. Brian Slaten, who plays Dorante's sidekick, is stellar, as is Van Norden as the father. The always-radiant Gigi Bermingham is excellent in dual roles as a pair of saucy servants. Director Stangl does a solid job with this adaptation, which is limited in its scope.