Emus are the second-largest living bird in the world, after the ostrich. They can grow up to six and a half feet tall. Often confused with ostriches, emus are found in Australia, while ostriches are native to Africa. Both birds are part of the ratite family, a group of birds who can't fly. In recent years, both emu and ostrich eggs have been turning up in grocery stores and restaurants in the U.S., and it looks like the emu egg may finally be having its moment.

New York City chef David Santos of Louro, a restaurant in the West Village, has been getting some attention recently for the emu eggs he offers on his menu. An emu egg at Louro, soft-scrambled and served with wild mushrooms and black truffle, serves two to six people and goes for $90. You don't have to go to Louro to find emu eggs, however. According to the New York Post, emu eggs are sometimes available at Whole Foods for $29.99 each, and they're very popular at the farmers markets that sell them. Other high-end restaurants have been putting the eggs on their menus as well. Wylie Dufresne's WD-50 at one point featured an emu egg fondue, and Blue Hill has offered an emu egg pasta.

A $30 egg at the grocery store or $90 egg dish at a restaurant sounds pretty outrageous (or just right for NYC prices, depending on how you look at it), but emu eggs aren't just any ordinary chicken egg. 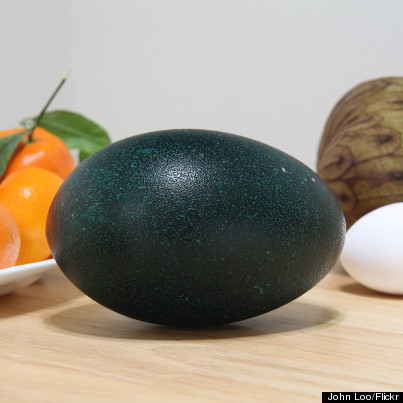 First of all, one emu egg weighs about two pounds, or the equivalent of roughly 12 chicken eggs. “It’s kind of like a kitschy delicacy … It was like a pterodactyl egg. It was huge!” a diner at Louro told the New York Post.

Size, however, isn't the only trait that sets emu eggs apart. Their stunning, emerald color makes them one of the most striking eggs on the planet. The blue-green hue is for camouflage, Lou Braxton of Roaming Acres Farm, an ostrich farm in New Jersey, told CBS. Emus lay their eggs in the grass and the color keeps them hidden from other animals. 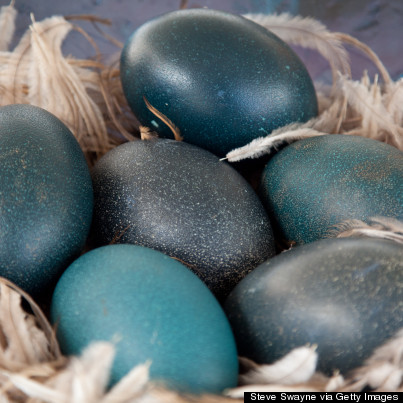 Of course, emu eggs also taste good, otherwise they wouldn't be making such a splash in the culinary world. One diner at Louro described the egg as "very rich and very decadent.” Its texture is more similar to a duck egg than a chicken egg, Braxton of Roaming Acres Farm told CBS.

While diners may still be warming up to the emu egg (and its $90 price tag), Chef Santos may have just the right tactic to turn it into a full-blown trend. On two nights this April he hosted a "Game of Thrones"-themed supper club at Louro that featured dishes inspired by the show. Emu eggs made the perfect dragon eggs.