"The September Issue," the new documentary about Vogue which screened at Sundance, has unearthed its first juicy tidbit: the magazine photoshopped Sienna Miller's head onto a different photo of her body, and Anna Wintour found the British actress "toothy" with too many fillings in her mouth.

The Daily Mirror's 3AM Girls report:

In a behind-the-scenes documentary, The September Issue, fearsome Vogue editor Anna Wintour claims Miller is too "toothy" and staff were worried she has "too many fillings" and "unruly hair"....

The documentary shows how the actress was airbrushed within an inch of her life for the shoot with famed photographer Mario Testino back in 2007. They then took one photo of her face and super-imposed it on a separate picture of her body.

The magazine released a statement praising Miller's beauty, saying, "While some retouching is a fact for any cover, no one is more convinced of Ms Miller's beauty than Vogue. 'The fact she's appeared on the magazine's September cover, our most important issue of the year, is a testimony to this truth." 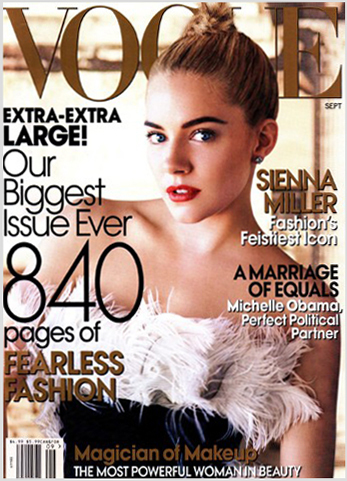