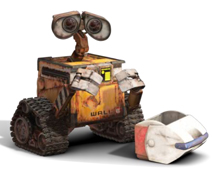 I took my kids to see WALL-E, the Pixar movie set 700 years from now about the last little robot living on a trashed and devastated earth. The profound and wordless forty-five minute prelude features the rusty WALL-E robot picking and sorting amongst the heaps of refuse to build his own collections to treasure.

....(i do not know what it is about you that closes and opens;only something in me understands the voice of your eyes is deeper than all roses) nobody,not even the rain,has such small hands -e.e. cummings, from "somewhere i have never traveled, gladly beyond"

This weekend, as Gustavo lunges towards the southern coastline and we approach the anniversary of Katrina, I imagine so many plundered worlds, whether war-torn or natural disaster, and the artist's small hands (small as the rain) picking the pieces and reclaiming the loss by making something beautiful. Today I celebrate the gift of artists, like WALL-E, who lovingly reclaim pieces of a cities long torn asunder. Such is the work produced by the hands and heart of Vicki Niolet.

Using found objects and re-crafting bits and pieces of this and that, Niolet makes what she terms "repositories" for various memories, events, people, and places in her life. These three-dimensional sculptures are crafted in wooden boxes and take various shapes and forms, while producing even more varied sounds and reactions. More recently, after Hurricane Katrina in 2005, Niolet's boxes have taken on more meaning as she assembled "High Water Mark" from literal pieces of her neighborhood after the storm. As a reliquary, these boxes preserve memory and imbue the found objects which might otherwise be considered devastating, with beauty and hope. 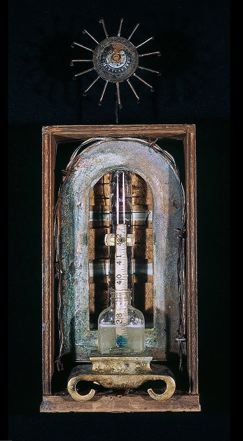 Kimberly Brooks: What is the inspiration for this body of work?

Vicki Niolet: Although I hesitate to once again drag up Katrina and all its baggage, it can't be ignored in its influence on my recent work. The one piece that solidifies my hurricane experience is "High Water Mark." It's made from a variety of objects found after the storm, a frame found on the beach, a tarnished lamp base, a tie rack spinner, all encased in a desk drawer from a neighbor's debris pile. This stuff was personal to me because of where I found it, in my immediate neighborhood. Since 2005, I've been adding water images to most of my work. The measurement on the ruler signifies the height of the storm surge in my community, approximately 38 feet. I had been using found objects for over 25 years, not really paying attention to their own history, but now these articles have survived a pretty intense situation. In their less than perfect, reincarnated condition, in a way, they represent our town's journey back from the storm. 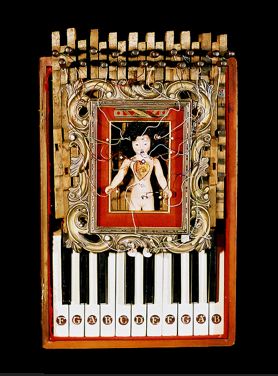 KB: Before you started making your Katrina-influenced pieces, how did you start making your sculptural music boxes?

VN: In 2003 a friend brought me a box of piano parts, keys, arms, hammers, like a box of wooden bones. I rearranged the whole keyboard outside on a picnic table and had an epiphany of sorts. Why not make a box with the image of music AND add music? I wanted to make it more than just a pretty "keyboard with rose" Hallmark image, so I added one of my dolls having a bad hair day and pinned her up, voodoo style, with nerve sensors. The song I chose to play through the wind up key in her stomach... the ever-smarmy 'Feelings'. I call it "Wired for Sound." Since then I've added music to my boxes whenever I can, but I always want to make it work on all of the levels. 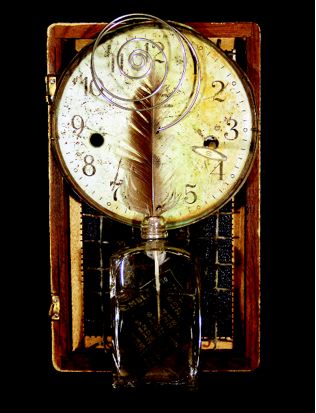 KB: The process of collecting your tools and medium must be lengthy. I imagine that each piece has many referents to different times, people, and places in your life. How do you go about creating the boxes?

VN: I work with lots of stuff, more politely called "found objects," relentlessly hunting and gathering my raw materials and then letting them find themselves. I start out by making sometimes 20 or 30 boxes at a time, setting them out and trying out pieces and parts until they tell me where they want to be placed. I have constructions that sit in the workshop for years, waiting for their character to develop. And I also have some boxes that I bring home from shows to dissolve their partnerships (usually amicably), and reassemble into new works, adding yet another layer to their history. One of my favorite quotes is by Virginia Woolf, "Arrange whatever pieces come your way." I flippantly used that as a title for my one woman show in July 2005, then Katrina hit one month later and it took on a different significance.

KB: In terms of the shape your work takes -- literally, so many of your pieces reminded me of altars or altar-pieces? Can you speak to that? Is that part of your goal or inspiration?

VN: To me, my containers are a cross between a Reliquary and a Safe Deposit box. As far as the altar thing goes, most of what I do isn't very intentional or over-thought. They just end up being combinations of my stuff. But I guess I gravitate to the altar shapes and boxes because I put my "relics" in them. I'm not pro or anti religion, in an organized sense. I guess I like to treat the pieces like they are finding new homes. (That really does sound symbolic of the storm, but I was doing that before Katrina, I had a show back in 2003 called "Repositories.") 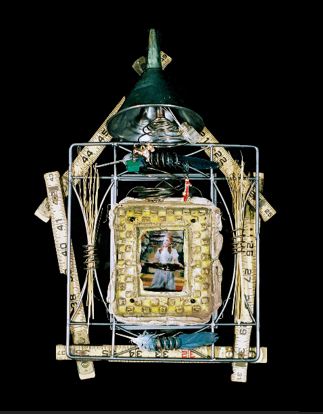 KB: What's your favorite reaction when people see your work?

VN: I love it when people "get it." My favorite reaction is a grimace, followed by a snicker, rolling right into a big hearty laugh as they take a second look and call a friend over to share in the joke. On the other hand, if they don't appreciate my sense of humor (sometimes it gets edgy), I'd at least like to have them walk away in total disgust. For me, any reaction is better than no reaction. 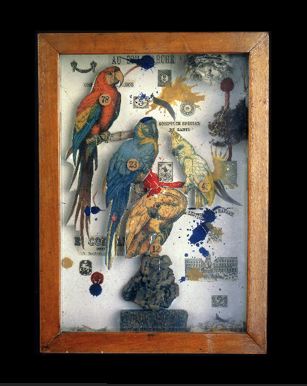 KB: In terms of your specific sculptures or boxes, is there an artist that has inspired your creations?

VN: Just about any work, 2 or 3 dimensional, by Joseph Cornell inspires me. The piece that currently appeals to me the most is "Habitat Group for a Shooting Gallery". Most of Cornell's work is quietly beautiful in subtle arrangements of ordinary objects. But I relate to this particular piece, because in it, I see an artist teasing his viewer. Not his usual exquisite balance of found objects, he places his familiar bird images in a signature aviary, but with a sadistic twist. The broken glass and bloodstains are not Cornell's typical images, and I imagine the crouching bird in the foreground winking at me, sharing his secret of evasion. I've seen a lot of "faux" Cornells, with craft store components, mimicking object for object, the same arrangements, in irreverent copies. I hope my assemblages evoke the spirit, not an imitation, of the master boxmaker. 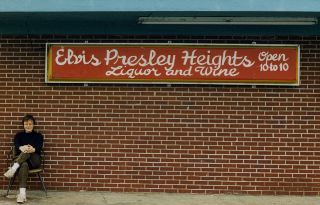 Vicki Niolet has been working in mixed media for over 25 years, drawing on her background in papermaking, photography, and ceramics. She has exhibited at the New Orleans Jazz and Heritage Festival, the American Crafts Festival at Lincoln Center, and in galleries across the country. She has produced an instructional video "Practical Papermaking" and published two books of photographs and commentary about Hurricane Katrina, "Parting Shots" and "West Side Stories". In addition to creating 3-D assemblages and music boxes, she is currently the Program Director of the Lumberyard Art Center in her hometown of Bay St. Louis, MS.

Niolet recently earned a fellowship from the Mississippi Arts Commission to help with her New York show next June. See Niolet's website for updates and further information about her December exhibit.

First Person Artist is a weekly column by artist Kimberly Brooks in which she provides commentary on the creative process and showcases artists' work from around the world. She has just returned from a summer break. Come back every Saturday for more Kimberly Brooks.