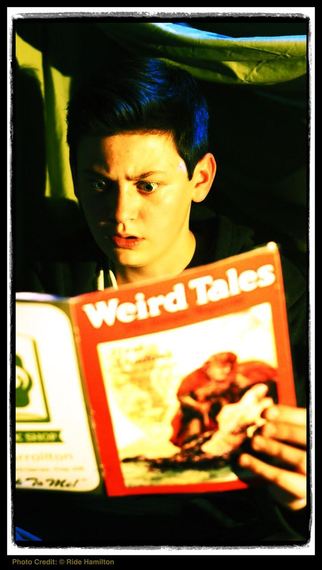 Before I discuss the three plays that comprise Tennessee Williams: Weird Tales, I would like to first take a moment to say how glad I am to see work like this being performed. The founders of the company, Augustin J. Correro and Nick Shackleford (who also directed the piece) have created a place dedicated to producing the works of Tennessee Williams, both well-known and rarely produced works. While certain Williams works enjoy healthy production lives (generally called the "big three": The Glass Menagerie, A Streetcar Named Desire, and Cat on a Hot Tin Roof) there are so many that I fear I will never get to see performed live. Because of this disparity, I am even more thrilled to see a company like this come into being.

And the production of Tennessee Williams: Weird Tales was as exciting and new as the company behind it. Composed of three one-act plays - Steps Must Be Gentle (circa 1980), Ivan's Widow, and The Strange Play (circa 1939) - Weird Tales ties these three stories together with young actor Andrew King playing a boy reading a magazine called Weird Tales. King's character becomes the conduit and guide for an audience who experiences these plays through his imagination. I can't help but notice the parallel between the Boy's journey and that of The Tennessee Williams Company of New Orleans itself, as two of the plays did have to leap from page to stage solely with the directors' imaginations as guides.

But, I digress. Tennessee Williams: Weird Tales is an appropriate term for this group of one-acts. The journey begins with a rarely produced play about Williams's favorite poet, Hart Crane. The play picks up after Crane's death, which occurred when he jumped off of a ship off in the Gulf of Mexico, and explores an imagined conversation between Crane and his mother. David de la Ronde Williams (aka David Williams) is a standout for his performance as Crane, who has been at the bottom of the Gulf for so long that his reaction to human communication oscillates between irritation, amusement, longing, and several states in between. He plays opposite the solid performance of Maggie Eldred's Grace Crane, who cannot quite come to terms with her own relationship to her son in the past or present.

We will see these actors again, but first Tennessee Williams: Weird Tales moves onto a decidedly weirder, darker, and sexier story called Ivan's Widow. Ivan's widow, named only "She," cannot seem to grasp the fact that her husband has died, though she wears mourning clothes and is seeing a psychiatrist ("He") about it. What follows is a sort of psychosexual fragmentation of a play that presents a number of difficulties for production. I could not tell in the production if the audience is meant to believe that She is imagining the inappropriate behavior of her psychiatrist or if that behavior is in fact occurring, or some combination of the two. I feel that this confusion might have been avoided had the moments of fragmentation been more pronounced, as they did not seem to have their own identities in production as much as they do in the script. In other words, what are these interludes between parts of this play? Are they passages of time? Moments of repression in the mind of She? If the production took a stronger stance on these, the rest of the piece would fall into place for me. This piece also struggled from an ending that was completely baffling to me because the final moment could not actually be seen by my side of the audience. Ivan's Widow is in many ways the hardest of these three pieces to do, and it is very interesting despite these complications.

If I am a bit hard on Ivan's Widow, it is probably because it comes before my favorite play of the evening, The Strange Play. I do not want to reveal too many of The Strange Play's secrets, as its embrace of this whimsical, ethereal, and, yes, strange, world is most pleasing when it is a surprise to the audience. Without going into too much detail, I can say that the play seems to be a sort of meditation on solitude, community, and connection to the world. I will also say that we again see the talents of David Williams, in a very different kind of role.

These three plays are certainly weird and wonderful, and they make Tennessee Williams: Weird Tales a fun and different kind of night at the theatre. If you're in New Orleans before April 17th, you can drop by The Metropolitan Community Church of New Orleans and check it out. More information, including tickets, can be found here. A big congratulations to The Tennessee Williams Theatre Company of New Orleans, whose work I look forward to following in the future. As Williams would say, en avant!