"The Enbridge Corporation has some difficult moccasins to fill."

Winona LaDuke of Honor the Earth was explaining the Calgary-based Canadian oil company's recent advert in rural Minnesota newspapers for a "Tribal Relations Specialist." You can view the cached job description here and decide whether you want to laugh or cry regarding Enbridge's misconceptions about Native American culture. Read between the lines and discover an all-out effort to educate all of those uninformed Indians about the benefits of having pipelines snaking across sacred lands, pristine waterways, and ancient wild rice beds.

Put it another way and you could say Enbridge is searching for an "Indian Whisperer."

In a clever move, Honor the Earth produced a very, very funny video response. "Enbridge Desperately Seeking Indian Whisperer" is a gentle, humorous approach to a very serious threat to Native culture. The filmmakers pulled off a coup that reveals a side of Indian humor that most whites never see.

Here is the set-up.

Enbridge is having difficulty finding applicants for the "Indian Whisperer" PR position. LaDuke pitches in and decides to help a fictional Enbridge recruiter on his hopeless and hapless quest to find someone who will lie to tribal members. The potential Indian Whisperer hire has to convince tribal members in the North Country about the benefits of a proposed pipeline that would potentially make northern Minnesota a tar sands superhighway to refineries on Lake Superior.

The results are both hilarious and sobering. Honor the Earth and award-winning filmmaker Keri Pickett have succeeded in producing an entertaining, informative vblog using side-splitting improv.

My favorite scene involves a woman's response to an impassioned plea by the Enbridge headhunter.

"You just spit on me!" the woman cries.

This clip deserves an Academy Award for deadpan humor.

Of course the flip side of the comedy mask is the tragic.

So far, Honor the Earth has succeeded in organizing grassroots opposition to the proposed 610 mile Sandpiper pipeline, which would move 375,000 barrels per day of North Dakota Bakken oil across the wetlands of Minnesota to Superior, Wisconsin. Efforts by LaDuke and Friends of the Headwaters resulted in a 1.5 year delay of a Minnesota's Public Utilities Commission decision about routing the pipeline. The scope of the project, combined with proposed expansions of the Alberta Clipper, rivals the carrying capacity of the Keystone Pipeline, but has received very little national press.

The real life effort by Enbridge to challenge Native communities' opposition through a public relations campaign is mirrored in history. The image is not pretty. 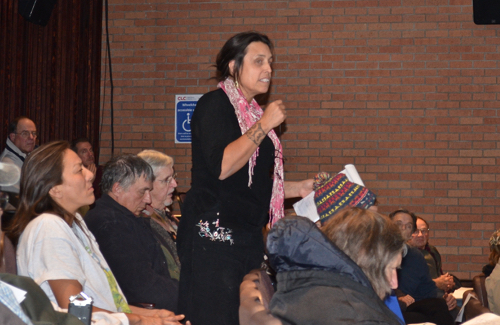 The following is taken from a fact sheet produced by the Nuclear Information and Resource Service.

In 1987, the U.S. Congress created the Office of the Nuclear Waste Negotiator in an effort to open a federal "monitored retrievable storage site" for high-level nuclear waste. The Negotiator sent letters to every federally recognized tribe in the country, offering hundreds of thousands and even millions of dollars to tribal council governments for first considering and then ultimately hosting the dump. Out of the hundreds of tribes approached, the Negotiator eventually courted about two dozen tribal councils in particular.

"They went out and they paid a bunch of Indians money, and sixteen of the twenty applicants were Indian tribes," LaDuke says.

Referring to Enbridge's similar search for a tribal liaison, LaDuke says, "It's a really bad idea, and Enbridge, despite its public relations campaign, is not well-liked. It is not well liked by the White Earth band, which just sued the federal government to stop another Enbridge pipeline."

In coordination with the White Earth Nation, the Indigenous Environmental Network, the Center for Biological Diversity, and many other individual and organizational plaintiffs joined Honor the Earth and filed a lawsuit against the State Department and John Kerry for seeking to permit the Alberta Clipper Expansion. The expansion would pipe 800,000 barrels of tar sands oil from Alberta, Canada, to Superior, Wisconsin. The lawsuit says that federal law was violated in the permitting process and that environmental reviews were not completed. Although Enbridge is not a plaintiff, the company received approval from the State Department to increase its cross-border oil flows on the Alberta Clipper line by re-routing the unrefined and volatile crude.

The path of the pipeline includes parts of the 1855 treaty area and the lands of the Red Lake Nation. The original pipeline was built in the 1950's and has had numerous leaks. A report by the Sierra Club details the "all risks, no rewards" potential of the expansion.

"Enbridge Desperately Seeking Indian Whisperer" is a funny, intelligent response to hubris on the part of Big Oil. I seriously doubt Enbridge can fill those moccasins.