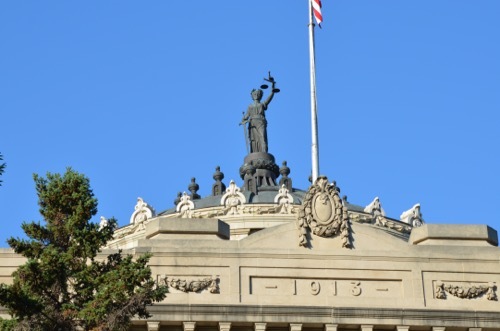 "Let's just end this little damages dance for the day so we can move on and file an appeal of the substantive issues as well as this sort of gagging of our ability to use Enbridge's own offers in our defense."

James Botsford was beaten but unbowed as he stood in the lobby of the Grand Forks County District Courthouse, his wife Krista at his side. North Dakota Pipeline Company LLC (NDPL) had sued the couple for the right to an easement over his farmland located twenty miles from where he stood. Botsford's land is a lynchpin in the proposed $2.6 billion Sandpiper Pipeline, a project that will carry Bakken crude oil from western North Dakota to refineries in Superior, Wisconsin. In pretrial legal maneuvering, NDPL avoided a scheduled jury trial that would have determined the amount of compensation for the eminent domain takings of the Botsford property.

"Today, James and Krista Botsford and North Dakota Pipeline Co. LLC reached an agreement for a 50-foot easement to construct, operate and maintain the Sandpiper Pipeline on the Botsfords' property," Enbridge spokeswoman Lorraine Little wrote in an email. "The Botsfords continue to own and have use of their property."

In another email, Botsford says he disputes this characterization. "We did not reach an agreement on anything except a temporary use of a damages amount simply to allow us to move on and file an appeal."

At issue Tuesday was $38,062. May 2014 court records show that an attorney for NDPL offered the amount for the easement. Botsford did not want the money. No amount of money would make him abandon his stand that a Canadian oil company had no right to force him to give up his land for an energy project that went against his value system, as described in this essay.

We told Enbridge and their attorneys that we drive cars and that we've enjoyed the boons that oil has provided... but that it's time for change. As a society we're scraping the bottom of the barrel with the desperation of "extreme extraction" just to prolong the status quo and the rusty technological infrastructure the companies own and are familiar with. We're doing this in spite of the toxins and earthquakes of fracking, the flaring off of natural gas, and in spite of the incontrovertible science-based evidence of the effect it's all having on the climate and the natural world upon which all living things rely and are a part.

So the company reduced the amount to $2,000 and sued the Botsfords in North Dakota District Court to force a settlement. The Botsfords were entitled to a jury trial, but it never happened. In pre-trial legal maneuvering, the oil company managed to convince the judge that a previous offer of $38,062 was part of negotiations prior to litigation, and therefore inadmissible in court. The only dollar amount the judge would allow was $12,158.96-- a figure obtained from an Ag economist from North Dakota State University, who was hired by the Botsfords.

Botsford says, "That amount just reflects the potential damages to the land by putting in a pipeline, but does not include the value to Enbridge to acquire the rights, nor the costs of cleaning up a spill or leak." 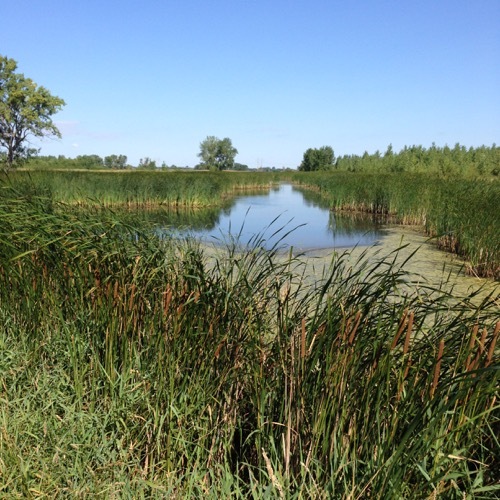 Proposed Sandpiper Pipeline will impact this wetland. Photo courtesy of the Botsfords

Botsford and his team agreed to the settlement number as a way to move the process forward. The money will remain with the court while the appeal process continues. If Botsford took the money to help with his legal expenses, he would not be able to appeal.

"For whatever reason, this was terribly disappointing to get a second blow from the judge. Her summary judgment that our principled positions were not worth the courts' time to hear took away our ability to speak," Botsford said after the hearing.

Botsford was allowed to take the stand and answer questions from his legal team regarding the land and his connections to North Dakota. While taking questions under oath, Botsford revealed that he was born across the street from the courthouse. His father was a well-known businessman in Grand Forks, who, ironically, was a farmland appraiser.

Botsford also attempted to tell the court that there is a possible pipeline leak on the property from an older Enbridge pipeline. A soybean field planted by a neighboring farmer who is leasing that particular parcel from Botsford has been trampled while Enbridge looks for a crack in the pipe.

When Botsford mentioned the Enbridge record of over 800 spills and leaks in the past decade, Enbridge objected and the judge would not allow it into the record. A jury will never hear it. 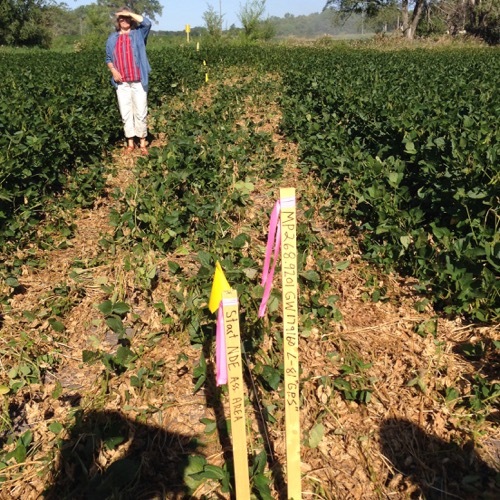 Krista Botsford standing in soybean field where Enbridge is looking for a possible crack in an old pipeline. Photo courtesy of the Botsfords

Botsford lost a significant battle, but has not lost the moral and legal war over his right to deny takings of his property. His family is now one step closer to an appeal to the North Dakota Supreme Court, where hopefully the issue of eminent domain will be examined.

Botsfords' attorney Derrick Braaten said, "The only reason to go through the trial was so that we could get to our appeal."

Braaten explained the process in a short interview after the hearing. The likely timeline to file an appeal is 30-60 days. It will take 6-8 months to complete the briefing and oral arguments, hoping for a court decision to order a trial by next spring. It could take an additional month up to one year for the actual trial.

Can the Botsfords get a stay on pipeline construction pending the completion of the appeal process?

Bratten said they "might" be able to stop construction, but that he had to consult with the Botsfords on how they want to move forward. The subtext is that an appeal process of this magnitude costs money--lots of money that the Botsfords do not have.

As filmmaker Keri Pickett and I scouted the grounds of the North Dakota District Courthouse, it was impossible to avoid the "photo-op" that, flanked by the American flag, towered above the edifice. Lady Justice had a firm grip on the scales of justice, holding our country's moral fate in the balance. This Lady watches over the distinction between truth and lies, and our legal system is designed to establish truth.

But does this always happen?

Legality does not always support morality, and this is the crux of the legal battle the Botsford family is facing as it confronts the money and power of the Canadian oil company, Enbridge.

As Pickett and I worked our way to Room 303, abandoning cameras with the guard until the judge ruled on whether or not we could bring them into the courtroom, the solemn power of the justice system was evident. The judge never ruled on our request. It was moot, since the jury trial never happened.

As we waited the bailiff provided us with chairs, since the courtroom benches were occupied with a dozen or so spectators. The rest of the seating was filled with green laminated placeholders for a jury pool that never materialized.

I reflected on those green cards, wondering about the citizens of North Dakota who were summoned to this jury trial. What would constitute their moral and political makeup? Would they be typical "salt-of-the-earth" Midwestern farmers, businessmen and women, students, doctors, or retired people who just wanted to enjoy the August summer day?

No matter what their age, occupation, or political make-up, the people represented by the numbered green laminated cards would tip the scales held by Lady Justice.

I wondered what they felt when they were sent home without ever seeing the inside of the courtroom on this day. Would they know or care why they were summoned in the first place?

If the trial had moved forward, would their collective intellect and moral fiber have made a difference in the case of Enbridge vs. Jim Botsford?