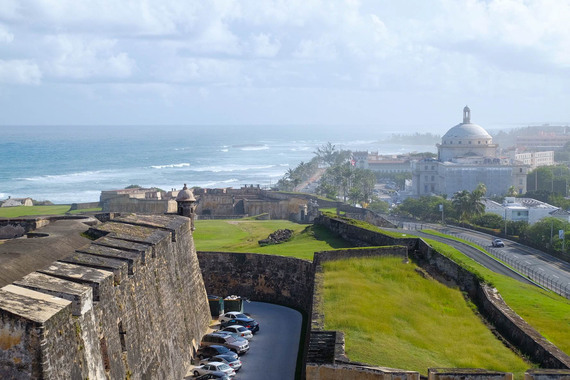 It was unfortunate that my very first glimpse of Puerto Rico was on a plane late at night. From my window, all I could see were dull patches of city lights over an endless blanket of black. A more scenic welcome would have been nice - lush and green and surrounded by that heavenly Caribbean blue to which I've become quite attached. 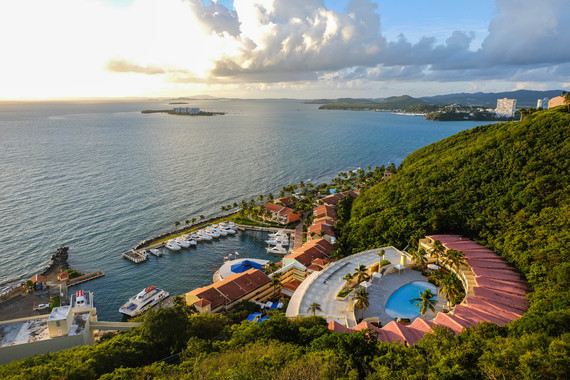 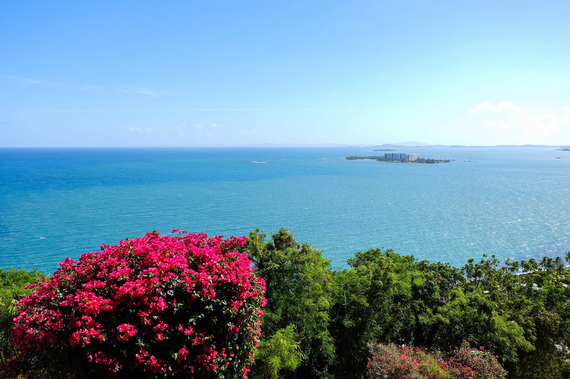 My not-so-ideal arrival was, however, soon forgotten the very next day when I, slightly unsteady from four hours of sleep, awoke to a magnificent view from the balcony of my hotel room at El Conquistador (a resort that has since found a special place in my heart). Under the rousing, pastel sky, deep green hills rolled down into the glistening water where two shades of blue come together a mile or so from the shore. There, a very distinct line formed, indicating exactly where the Caribbean Sea meets the Atlantic. An islet sits at a close distance, boats lazing peacefully at its wharf along its Southern shore. Further still, the sun teased, its rays peaking through the clouds. If there was a moment that could sum up my four-day visit in this half-forgotten island, this was it.

It's hard to imagine that tourism only makes up less than 10% of Puerto Rico's income, considering that it's one of the tropical island's biggest strengths. It is, after all, not called the Isle of Enchantment for nothing. 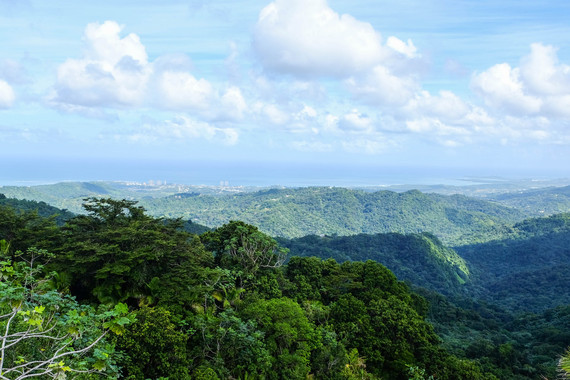 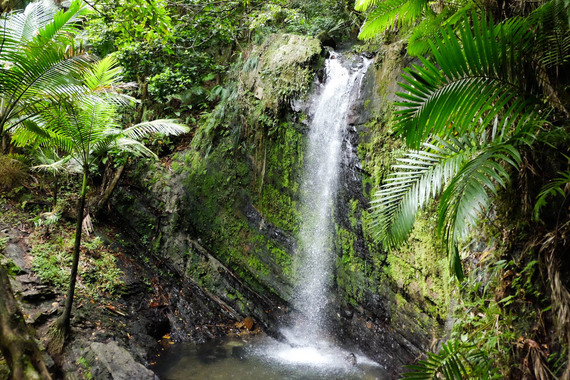 Consider El Yunque, for example. Nestled on the slopes of the Luquillo Mountain Range, it is the only tropical rainforest in the US National Forest System. Here, raging waterfalls, some easily accessible from the main road; a misty dwarf forest; and tall peaks that afford the park's most scenic views captivate as much as the trails, gloriously muddy from the constant showers; the flora that border them, many of which, our guide gladly shared, carry surprising medicinal properties; and the elusive animals that dart past them. 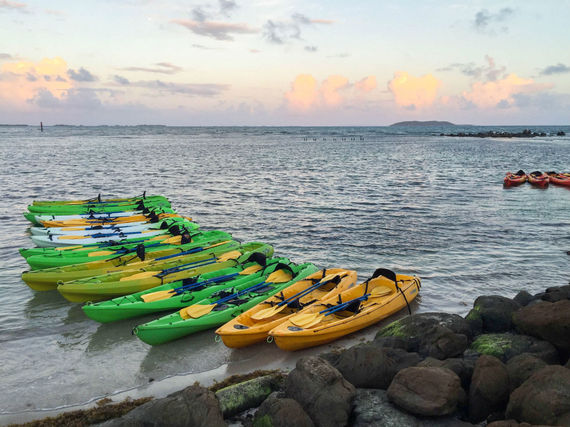 Equally enchanting is the Laguna Grande Bioluminescent Bay, one of the few remaining in the world. Some would argue that it's not worth the trouble - the dwindling population of dinoflagellates, caused by excessive development nearby, fail to impress, the glowing water depicted in photos exaggerated. But kayaking through a mangrove forest in darkness, which is not an easy feat, into a beautiful lagoon bedecked by stars and the occasional sparkle in the water caused by startled planktons can be an unforgettable and rewarding experience. 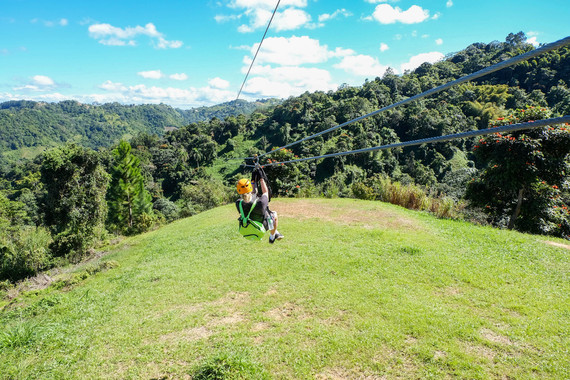 Puerto Rico is meant to be explored and seen from all vantage points, and at ecological adventure park ToroVerde, opportunities abound to view it from above. Several zip lines of different lengths and thrill levels, complemented by suspension bridges and rappelling lines, take the adventuresome soaring a few hundred feet above forests, valleys and rivers. It is home to the Beast, one of the world's longest single run lines, on which a special harness allows visitors to "fly" belly down for almost a mile. Seeing the island from atop a tower or a mountain peak is one thing, but watching its individual parts go by as you zip past in the air is a completely different affair altogether. 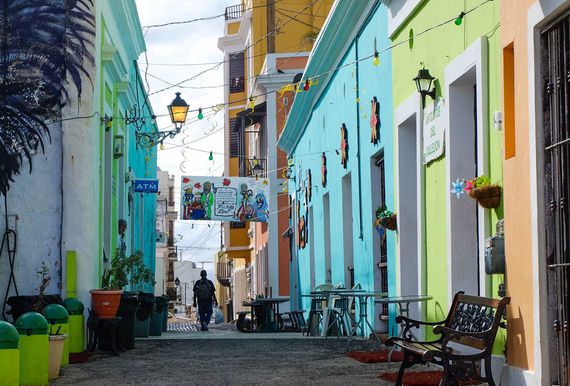 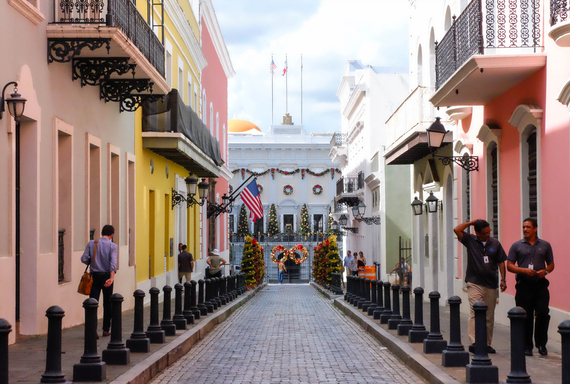 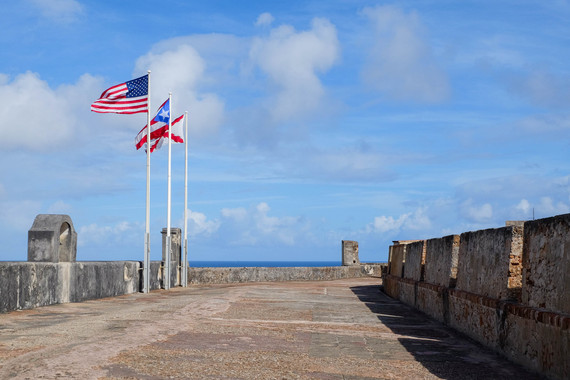 Back on land, the island's historic and charming capital can't help but mesmerize. Old San Juan is undeniably pretty, with its winding, blue cobblestone streets lined with adorable pastel buildings that rise up only 3 or 4 stories, vestiges of Puerto Rico's Spanish colonial past. Yet it was an important stronghold in the Caribbean as well, as evidenced by its towering fortresses, from giants like Castillo San Cristobal and Castillo San Felipe del Morro to the nondescripts like San Gerónimo de Boquerón near Caribe Hilton, birthplace of Pina Colada. As it was my last stop, I took everything in slowly and carefully. I gazed in awe at the world's narrowest house (La Casa Estrecha), wondered at the prisoners that no doubt baked in the fortress dungeons and the elites that once roamed its streets, and enjoyed the Christmas serenades of local performers at a nearby square.

My first glimpse of Puerto Rico may not have been memorable, but my visit had been nothing but. And as I stood at a portion of the old city wall looking out to the blue waters that seemed to get even bluer and more beautiful in gray weather, I honestly contemplated moving here, at least for a short time. There's no denying I was spellbound, enchanted. I know that one of these days I will be back. Who knows? Maybe then I'll finally get that picturesque arrival I was hoping for.

Michelle Rae Uy is a travel writer, editor and amateur photographer based in Los Angeles. Check out her adventures on Another Spur on the Road.