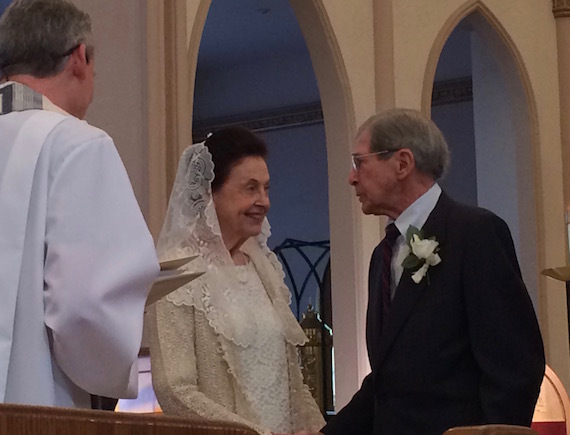 Confession ... for a good part of my life I believed "older" people lived on a different emotional plane, an asexual planet devoid of romance, free from desire. It didn't seem possible that someone in the midst of their golden years could actually experience all those tingly feelings that come from the infatuation of a new love. However, I also never deduced exactly when this human characteristic disappeared, but certainly by the 8th or 9th decades! Surely the feelings experienced when pheromones flooded our bloodstream were limited to those of us under a certain age. Surely.

I was mistaken. It's been with a sense of pure delight that I've been witness to my dear friend and neighbor falling in love. Oh, did I mention that she's at the tail end of her 70s and he's in his mid-80s? Remarkably, her description of the emotions she's experiencing strike me as precisely the same feelings as anyone who's ever fallen in love.

There's even a scientific explanation for these feelings. My friend and her suitor are undoubtedly experiencing the brain's release of dopamine, associated with this organ's "reward" pathways and also oxytocin, the "love hormone," which increases the effects of our emotions. The release of these brain chemicals insures a desire to experience more of it! What a marvel that our magnificent brains can enjoy this feeling at any age.

Their courtship began a couple of years ago, a few years after the death of their beloved first spouses. For my friend, until recently, it was not a courtship, but a friendship, as she stood firm in her belief that she'd never remarry. One day, that all changed. One day last summer, she decided she was going to hold his hand.

I noticed the dozen beautiful red roses on her dining room table one afternoon, a gift to celebrate they'd taken their friendship to a new level. What began with a bit of handholding had progressed. It was as if she'd let down her guard and opened herself to the possibility of new beginnings. She sheepishly confessed to me that, until it had happened again, she'd no idea how much she had sorely missed being held in someone's arms. Shortly thereafter, with stars in their eyes, they became engaged. Our neighborhood watched with joy in the ensuing weeks whenever we spotted the newly engaged couple walking arm-in-arm, albeit slowly, to the neighborhood coffee shop, four blocks away.

Recognizing that time is fleet of foot, they decided on a short six-week engagement and are now newlyweds, preparing to leave on their second honeymoon, as the first one proved too short! With the resounding support of all seven of their combined children, they appear positively giddy in their joy. Watching them hold hands, it's easy to sense the genuine pleasure they feel as a new couple, cherishing each moment of this next journey, whether long or short, together. They exude an unmistakable tenderness toward each other and a joie de vivre in simply being alive.

My friend shared with me this is already the best of marriages, with no distractions from jobs or children. Their only plan is to enjoy each other, as each day moving forward is a gift ... a gift of time they will share together.

She encouraged me to write about it and tell everyone it's never too late to fall in love. So, I'm here to tell you that romantic love is alive and well ... at any age.

After teaching somewhere around 10,000 mother/baby pairs the art of breastfeeding, Vicki Tapia found her energies redirected to the other end of life, after both parents were diagnosed with dementia. A diary written to help her cope with caregiving morphed into Somebody Stole My Iron: A Family Memoir of Dementia, published in 2014 by Praeclarus Press. Tapia's memoir was a finalist in The 2015 High Plains Book Awards.

Encore For Love
5 Ways Post50s Can Improve Their Sex Life