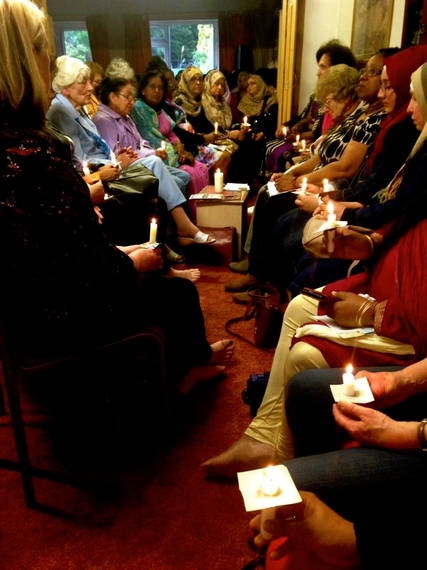 On Friday May 27 I attended my third gathering of women in Birmingham passionate about connecting with like minded sisters living in the city, with roots from across the world. The first time I attended a Women's Federation for World Peace meeting in 2015 we counted more than 50 nationalities in the room, it felt like a mini UN get together. As before the room was buzzing and alive with colors, with fashion and clothes from around the globe from all continents.

The theme this month was the problem of Female Genital Mutilation (FGM) in Africa. This was not to suggest the problem exists only there, but there was a focus on this breach of human rights happening in African countries that was experienced or felt here in Birmingham. I have not closely looked at FGM since I wrote some of my thesis on it in 2013 and the memories, facts and figures come flooding back. We can't afford to think that all the problems are 'over there'. FGM takes place in England too, there are practitioners coming over here specifically to carry out the procedure on young girls in England.

A gynecologist talks to us about her challenges of climbing the career ladder as a Muslim lady in a headscarf, up against white middle class privately educated women who make it to the top more easily. She then goes on to explain how some women who have been mutilated have serious problems during childbirth and pregnancy and often these are not identified until much later into the pregnancy. She is sad to tell us that some women want to be 'sewn up' as they were before, but this is illegal in England.

An African lady tells us she is from a family and background where everyone she knows is a victim of FGM, that it is cultural and requires a change in mindset and values for a change to occur. She explains that there are different types of FGM, some that may only involve removing the clitoris, and others also include removal of the labia and piercing. The World Health Organization has identified 4 types.

A Nigerian lady shares with us her experience of living with being a victim of FGM since the tender age of 9, and how this has impacted on her happiness her entire life from childhood, adulthood to now parenthood. She explains how her confidence and self-esteem have been taken away, how her faith in God and the joy she receives from singing keep her alive and give her some peace. She repeatedly tells her how hard it is, how hard life is living with this experience that she made sure did not happen to her daughter. It's hard to hold back tears listening to this beautiful woman's story. She stands there in a long purple fitted dress, wearing beautiful jewelry with her hair neatly arranged in a style that compliments her features. Beneath all of this lies deep pain, a sense of loss, sadness, but some hope for her daughter and that this will all someday stop.

A teacher ends the discussions by sharing with us that a young girl at her school said she was going on holiday to have this done to her. The head teacher panicked and wanted to call in the social services but the teacher decided to have a chat with the girl's father whom she knew. The father shared his dismay, and that he did not want his child to suffer in the way that he and his wife had been affected, regarding the intimacy of their marriage as a result of his wife having this procedure carried out on her. He did not let his daughter leave and have this done to her in the end.

The meeting ends with some prayers and songs sung in a range of languages, whilst we all hold a candle sharing a peaceful moment, and remembering all the women that have suffered in silence and continue to suffer as victims of FGM.

We live in a patriarchal world but FGM is an issue that is practiced in different countries where the pressure for this to happen is not just necessarily directed from men as form of domination. It is deeply imbedded in some cultures by women to be enforced on girls and women, as a way of life and often related to religion. But this is where culture and religion are entangled and it is not a religious practice at all. Survivors need to be supported and cared for in living with this experience. Men need to be empowered to speak to other men in their community about the problem and also be included, its not a fight only to be fought by women. Religious leaders need to be included to share with communities that this is wrong and not an order from God but a man made act of violence. For change to occur a range of legal measures and education in making a shift in thinking amongst these cultures are required, for sustainable impact and to put an end to this violence against women.