It's dinnertime and my 4-year-old son is deep in play. When I announce that dinner is ready he makes his own announcement: "I don't want to eat, Mommy."

I tell him five words that avoid the food battle that he wants me to engage in: "You don't have to eat."

This is the rule in our house but it is followed by a second rule that everyone follows, regardless of wanting to eat or not. I tell him that family dinners are about being with family, and not just eating, so we all have to sit at the table.

Nine times out of 10, once he sits, he eats at least some of the food on his plate.

Why avoiding food battles is so important.

My problem with food battles is that there is a winner and a loser. If the parent wins then the child loses, and if the child wins they hold all the cards. Both situations are not beneficial!

When we make eating about the parent's will versus the child's will, the joy and connection of eating gets lost. Some parents may win the battle and feel good that their child eats the way they want them to eat, but deep down the child may be full of resentment, eating peas to please his parents and not because he enjoys eating them.

In fact, a 2008 study published in Journal of Nutrition Education and Behavor found that parents who pressured or used rewards to get their preschoolers to eat fruits and vegetables saw an immediate increase in intake, but also had children that were less likely to prefer such healthy foods.

Make it a win-win.

What I like most about Ellyn Satter's Division of Responsibility in Feeding, is it gives parents and children very specific jobs in the realm of feeding. Parents are in charge of deciding what is served at meal time, when meals occur and where. Children get to be in charge of choosing what to eat and how much from what is offered to them.

So when my children complain about what I make for them, I always remind them that they can choose not to eat it. And I make sure to include at least one or two items they are likely to accept. This gives them some control, melts away the tension, and makes them more likely to try it (this is very different from an eat or starve strategy).

And isn't it enough that parents have to plan and shop for food, prepare meals and serve them in a structured manner? If they take on the added responsibility of their child's job of eating, it just makes the whole process more miserable. The same goes for when kids take over the parent's job of deciding what to eat. It's not fun being a short-order cook or being held hostage by a child who learns they hold all the power.

Getting past the fear.

I have found that allowing children the freedom to choose from what is offered is not just hard on parents, it actually fills them with fear. What if they only eat bread? What if they say they are hungry before bed?

For example, it helps that I know my 4-year-old is experiencing slowed growth and cognitive changes that mean his appetite is low and he is more selective with his food choices. I know that he meets his nutritional needs and usually does better at breakfast and lunch -- and I use snacks to fill in nutrition gaps -- so I'm relaxed come dinner. He will grow out of this resistant stage the same way his older sister did.

Additionally, the preschool years are a time children take initiative with daily tasks including eating. Children allowed to take the lead once food is served, and be successful, are more likely to feel good about eating. But children who aren't allowed to take initiative, and are criticized during the process, may develop a sense of guilt around eating, resulting in less confidence and enjoyment.

With a deeper understanding of feeding, parents can skip the food battles, trust their kids will move along with food acceptance at their own pace and embrace the family meal as a way to support children in this endeavor.

And those five words (you don't have to eat), while scary, allow this transformation to happen. 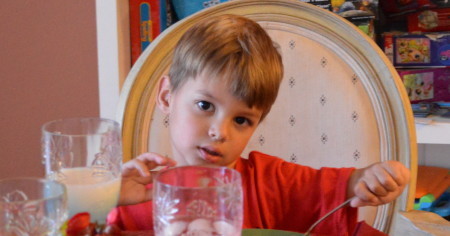