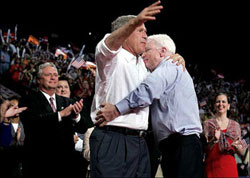 I hate to be the one to break up a love affair, especially with Valentine's Day just around the corner, but I can no longer stand idly by and watch the media and independent voters continue to throw themselves at the feet of John McCain.

The John McCain they fell in love with in 2000 -- the straight-shooting, let-the-chips-fall-where-they-may maverick - is no more. He's been replaced by a born-again Bushite willing to say or do anything to win the affection of his newfound object of desire, the radical right.

And we've got the money shot of his betrayal on tape: McCain singing the praises of Karl Rove, calling him "one of the smartest political minds in America," and saying, "I'd be glad to get his advice."

So, please, stop pretending that McCain is still the dashing rebel that made knees buckle back in the day -- and stop referring to him, as the New York Times did this weekend, as "moderate" and a "centrist."

What is it going to take for you guys to face reality? McCain verbally stroking Rove should be the equivalent of that great scene at the end of The Godfather where Diane Keaton's Kay watches in horror as Al Pacino transforms, in the kiss of a ring, from her loving husband Michael into the next Don Corleone. This ain't the same man you married.

I know it's hard. I myself was deeply enamored of the old McCain. In 2000, I invited him to give the keynote address at the Shadow Convention I'd helped organize. He spoke with passion about the need to clean up the "iron triangle of lobbyists, big money, and legislation."

And now he'd be "glad to get" advice from one of the preeminent architects of that triangle?

Of course, McCain's embrace of Rove is just the latest proof that the new McCain bears no relation to the old.

The old John McCain talked about trying to do something about global warming and encourage renewable energy. The new John McCain didn't show up for a vote last week on a bill that included tax incentives for clean energy, even though he was in DC. And then his staff misled environmentalists who called to protest by telling them that he had voted for it.

The old John McCain once stood tall as a fearless leader on immigration, co-sponsoring a humane, bipartisan reform bill with Ted Kennedy. The new John McCain, when asked during a recent GOP debate whether he would support his own proposal, replied: "No, I would not." In other words, he was for his core beliefs before he was against them.

What's the opposite of a "maverick?"

So McCain has backed an amendment that would limit the right to habeas corpus, has endorsed an Arizona constitutional amendment that would not only ban gay marriage but deny benefits to unmarried couples of any kind (lest those pesky gay people find some kind of loophole), and has discovered a newfound support for teaching "intelligent design" in schools.

The old John McCain once tried to take the mantle of true conservatism away from George W. Bush. The new John McCain is now essentially running to give America a third Bush term - and, indeed, will even out-Bush Bush when it comes to staying the disastrous course we're on in Iraq.

Right on time, the new McCain got Bush's blessing on Fox News Sunday: "I know his convictions," Bush said. "I know the principles that drive him. And no doubt in my mind he is a true conservative."

There you have it: John McCain, a Bush conservative. If you love George Bush, and all that he's brought you over the last seven years, you're gonna love John McCain.

And though McCain threw the mouthbreathers at CPAC into weeping, lamentation, and gnashing of teeth last week for not being right-wing enough, he is demonstrating every day that he will be more than right-wing enough come November.

As it turns out, the new John McCain doesn't need any advice from Karl Rove. He's already internalized the Boy Genius' lessons.

If you think the problem with the United States right now is that we haven't given Bush enough time to finish his agenda, then John McCain is your man. If not, it's time to stop running on the fumes of romantic notions past and find a good divorce lawyer (and, yes, I'm talking to you in the campaign press corps and to you independents and to you moderates and to you anti-war McCain voters in Florida).

The Thousand Year War Express is careening along the road to the White House, and the new John McCain is gunning the engine. And he has to be stopped.