In 2012, to learn about carnivore ecology in Alaska and celebrate completing my doctorate, my family and I visited Tom Meier, who led Denali National Park's biological program from 2003 until his unexpected death in 2012. I first met this key mentor in the early 2000s, when I tracked wolves for him in Montana, to document a dispersing wolf population. Back then he worked for the US Fish and Wildlife Service on the Northern Rockies wolf reintroduction and strongly encouraged me to attend graduate school. 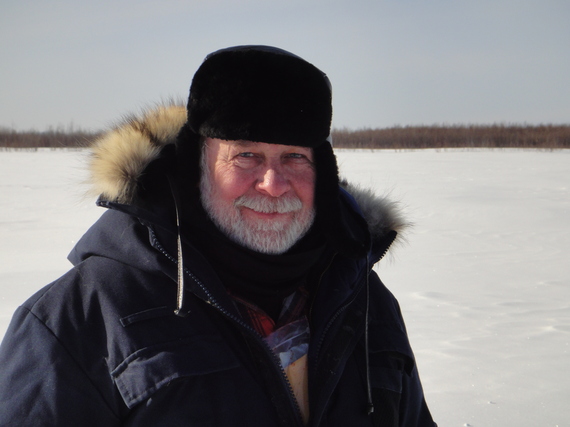 In Alaska I joined him in his office, where a large Denali map hung on the wall. On it he pointed out a 7 by 20-mile notch in the northeast park boundary. Congress didn't include this chunk of private land, a popular hunting and trapping area called the Stampede Corridor and Wolf Townships, when they expanded the park in 1980. Tom used a recent incident to illustrate conservation challenges where wolves are subject to legal killing beyond park boundaries. 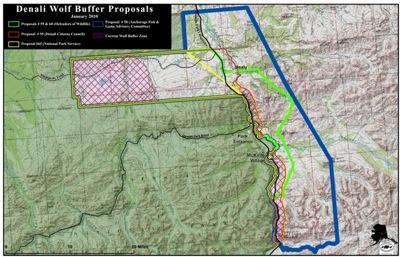 In May 2012, a trapper hauled a dead horse to a riverbank in the Wolf Townships near the park boundary. He set snares all around it, hoping to catch wolves attracted by the carcass. The snares lay in an area formerly managed as a buffer zone, where for one decade the state had prohibited wolf trapping to protect wolves that spend a good portion of their lives inside park boundaries. The state had lifted this buffer in 2010, with no plans to reinstate it. The trapper caught two wolves. One was a breeding female of a pack often seen by park visitors--the Grant Creek pack. To make matters worse, in June the other breeding female in this pack had died of natural causes. Thus it appeared there'd be no pups in this pack. While the trapper had done nothing illegal, this wolf's death raised public ire and an emergency petition to reinstate the buffer, which the state denied.

At the heart of such transboundary issues lies the fact that the US National Park Service has a mission to preserve and protect natural resources, which means no consumptive or destructive use. Meanwhile, states have a mandate to conserve natural resources, which means wise use and can include hunting. In places like Denali and surrounding lands, these two different mandates collide, with animals such as wolves suffering the consequences.

The next day, we joined Tom and park wildlife biologist Bridget Borg to survey the East Fork wolf den. Discovered by Adolph Murie in1940, this den site had been used periodically by wolves throughout the decades. We crossed a stream and then bushwhacked through the willows along the East Fork River, stopping periodically to listen for signals from radio-collared wolves. 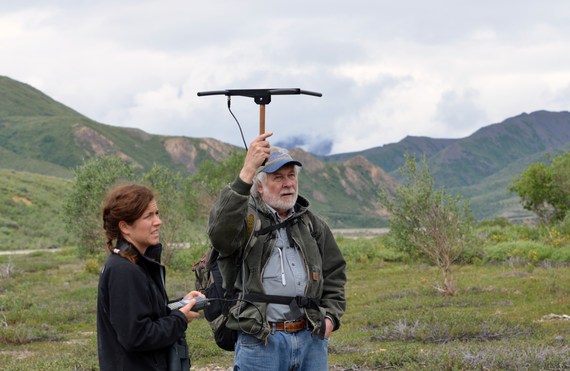 Murie's East Fork den lay atop a high knoll. Ribbons of aspens grew on the knoll's south-facing flank. Leaving the riverbed, we side-hilled and scrambled up a steep, partially washed-out talus slope, rested briefly on a grassy sward, and then thrashed through hellaceous shrub thickets toward the den.

The den's dark, oval mouth lay in a slope of red-ochre sandy soil, topped by a thick thatch of grass and azure forget-me-nots. From this vantage point, we could see for miles along the East Fork River to Polychrome Mountain and beyond. In 2011, the Grant Creek pack had used a nearby den. Tom and Bridget had observed the pack using that other den during spring and early summer of 2012. They surmised that since the demise of the pack's two breeding females, a third female may have bred.

We sat outside the Murie den and ate lunch. As we ate, we talked about wolf studies. There are places where scientists have had insights that have profoundly changed how we see the natural world. This was one of them. 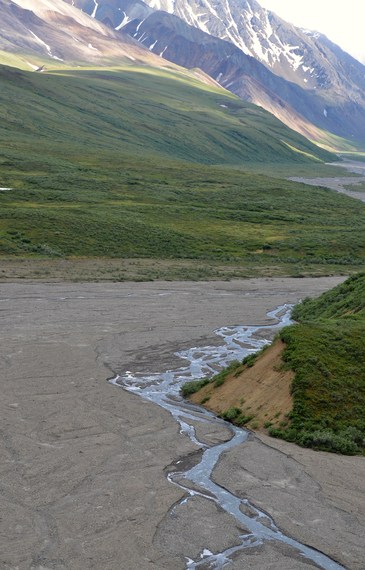 Murie spent weeks watching this den and the resident wolves through binoculars. Piecing together wolf social ecology and hunting habits, he found that these animals preyed mainly on sheep, primarily killing young and weak animals. He concluded that wolf predation had a beneficial effect on the Dall's sheep population, countering the ideas of those who favored culling park wolves to increase sheep numbers. The park opted to use Murie's science to manage its wolves, which meant continuing to protect them so they could serve their ecological role. 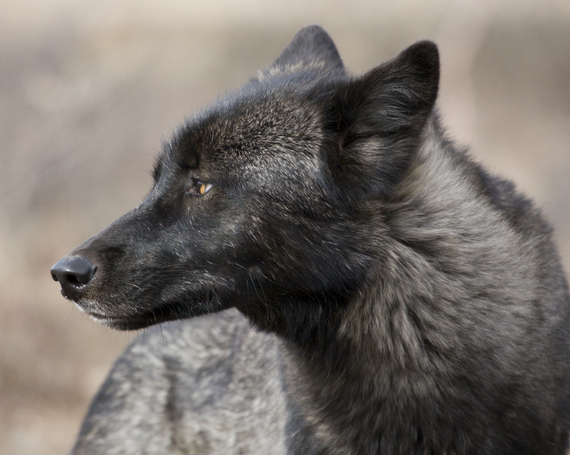 Many wildlife biologists followed in Murie's footsteps in Denali, such as L. David Mech, Gordon Haber, and Vic Van Vallenberghe. Most recently, Bridget Borg looked at how wolf trapping outside the park affects wolf viewability inside the park.

We gazed out at the Toklat Valley and talked about geology and conservation. This big landscape bred big mountains and bigger thoughts. Its ineffable wildness had inspired science rooted in both empiricism and a deep love of nature. Tom was part of this legacy. We talked about hope. And as we discussed the vicissitudes of wolf management, he reminded us that as with all else, we couldn't survive on sorrow and anger.

We got up and bushwhacked upslope, where we found still more dens. At the top of the knoll we found a meadow spangled with yellow cinquefoil and what Tom had been searching for: the carcass of the Grant Creek pack's second alpha female. She died that spring of natural causes, perhaps while giving birth. In her lifetime she had many pups, who filled this landscape with their howls and wildness. She rested on a soft carpet of grass, her carcass intact and beautiful. Tom considered collecting her skull as a park specimen. He knelt, gently touched her thick, pure-white fur, and decided to let her be. 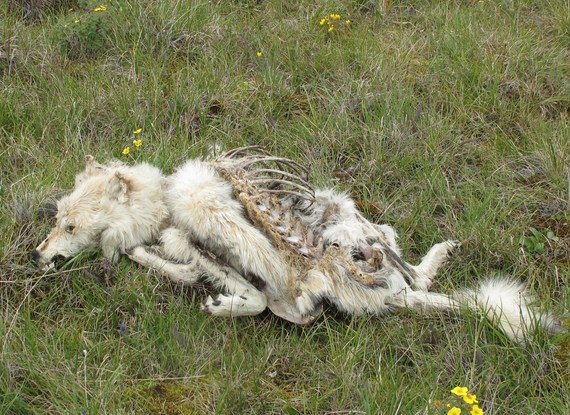 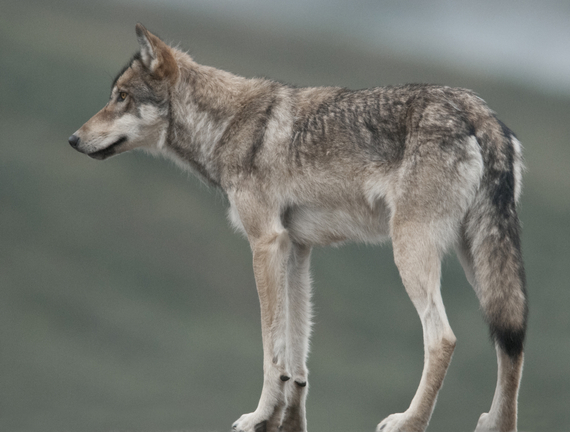 Since 2012, the East Fork pack has dwindled from 14 individuals to 2--a gray collared male and a black uncollared female wolf, seen together last winter. Since then, the male was shot outside the park, his collar destroyed. The female was seen in mid-May at a den site, just outside the park boundary. She's believed to have produced pups. No other wolves have been observed in the vicinity.

The East Fork female and pups' future is uncertain without other wolves to help feed them. The conservation community has been urging the park and state to intervene and rescue the pups. If these wolves die out, this will mean the end of an iconic, ecologically valuable wolf family that has been studied since the 1930s.