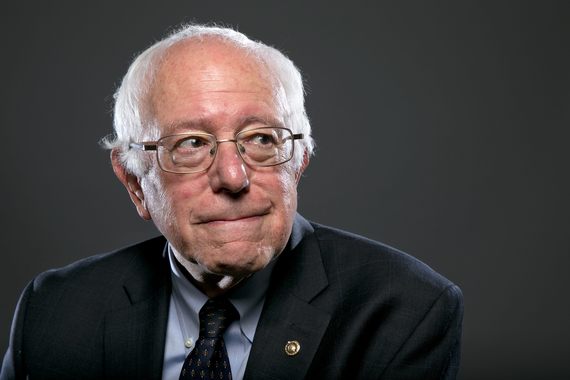 There's no need to link to the scores of articles declaring the Democratic primary race effectively over, as surely anyone reading this has already read those articles.

Nor is there any need to link to Clinton campaign press releases declaring Clinton's delegate lead "insurmountable," as those press releases began to be disseminated through the mainstream media after Bernie Sanders lost five states on March 15th.

So the fact that the Democratic primary race is now over is common knowledge.

Rachel Maddow recently pointed out that even if Bernie Sanders won every remaining primary and caucus 55 percent to 45 percent, he still wouldn't catch Hillary Clinton in pledged delegates.

And John King of CNN has been pointing that out for well over a month now.

While there's an equally strong consensus that Clinton can't clinch the nomination purely with pledged delegates -- giving Sanders the option of taking this primary race all the way to the Democratic National Convention, the first opportunity super-delegates will have to cast their votes -- the media is certain enough that no super-delegates will switch from Clinton to Sanders that it's clear they plan to formally declare Clinton the Democratic nominee as soon as she "clinches" the nomination through both pledged and super-delegates. That the latter don't vote and can't be counted, per edicts of the Democratic National Committee, until the convention in July is clearly no obstacle -- let's be realistic -- to the media doing just that. And Clinton's recent public vetting of Vice Presidential candidates underscores that she too plans on declaring herself the presumptive nominee just as soon as she reaches 2,383 delegates using both her pledged and unpledged delegate counts to get there.

In this view, the distinct possibility, based on polling and demographics, that Bernie Sanders is poised to win in Indiana, West Virginia, Kentucky, Montana, North Dakota, South Dakota, New Mexico, Oregon, and California is no threat to anyone or anything the Democratic Establishment cares about.

Which means that anyone whose heart is with Sanders, and who planned on voting for Clinton exclusively based on her perceived electability, now gets the enormous benefit of being able to have their cake and eat it too.

It's a rare treat for a voter, but then again, this has been the rarest of election cycles in more ways than one.

So it's time for Sanders supporters to admit what the media and Clinton campaign have known since mid-March: that everyone who wants to can now vote for Bernie Sanders without any fear of it making a Trump presidency even a mote more likely.

The latest poll from California shows Clinton and Sanders in a statistical tie; the same is true in Indiana. Previous polling suggests Sanders is ahead in West Virginia. Based on demographics and other key indicators, Sanders is favored in Montana, North Dakota, South Dakota, and Oregon. The same could be said for Kentucky. New Mexico might be a slight stretch, but what of it? Clinton's the presumptive nominee, so states that might otherwise have been a slight reach for Sanders because of some voters' concerns about his electability should now -- given that the electability issue is officially off the table -- be reasonable gets for Sanders.

Voting for Sanders in our new, consequence-free reality isn't just a vote for the man himself -- or even primarily that -- given that, as all media outlets have confirmed, Sanders will never be President.

Indeed, one could now vote for Sanders in any of the remaining primaries and caucuses simply to give him more leverage at the Democratic National Convention. Hate the idea of super-delegates? Want a $15 minimum wage? Sick of bloody and senseless foreign interventions? Oppose job-killing international trade deals? Want to see an end to fracking? Prefer open primaries to closed primaries? Think college tuition should be free for all? Favor criminal justice reform? You're in luck: a vote for Bernie Sanders gives him the capital to militate for these things at the Democrats' convention in Philadelphia. The more delegates Sanders has in Philly, the more likely he's able to change the party platform to conform to your own political, economic, and cultural values.

Now that voters are free to, as it were, vote for "both" Clinton and Sanders -- Sanders on the physical ballot, with Clinton as the actual nominee regardless -- we can imagine what the rest of the election season on the Democratic side will look like.

And then, on the very night Bernie Sanders wins the largest primary vote of the election season -- California -- Clinton can come out and declare herself the Democratic nominee.

It's not ideal, exactly -- declaring yourself the winner of the Democratic primary race on the same night you lost California -- but as we've consistently been told by the mainstream media, and as happens to be true, this is all about the delegates. And we now know that even if Sanders wins in Indiana, West Virginia, Kentucky, Montana, North Dakota, South Dakota, New Mexico, Oregon, and California, and even if he's ahead of Hillary Clinton in the national polling at that point, and even if he continues to poll better against Donald Trump than Clinton both nationally and in all battleground states, and even if (in this scenario) Sanders has won 20 of the last 25 nominating contests in states all across America, not a single Democratic super-delegate will switch his or her vote from Clinton to Sanders.

It may seem odd to some to hear it stated this way, but it's all true -- so please don't think this is sarcasm.

Rather, I'm urging voters to be every bit as realistic as the mainstream media and hundreds of super-delegates have already announced themselves to be.

The Democratic primary race is about delegates, not momentum -- this has been a mantra on CNN, for instance, for many months -- which, now that the delegate race is effectively over, permits voters to vote for the candidate whose values they share rather than the candidate they believe has the best chance (all extant polling notwithstanding) to beat Donald Trump.

There's a real argument to be made that permitting Sanders to go into the Democratic National Convention with 27 state primary and caucus wins under his belt and 45 or 46 percent of the nation's pledged Democratic delegates would be good for the Party. It would allow Sanders and Clinton supporters to come together in Philadelphia on a roughly equal footing -- but with everyone knowing that Clinton has been the presumptive nominee since April -- to hammer out a Democratic Party platform that reflects an approximated consensus of Democratic progressives and moderates.

This is a serious question: what in the world would be wrong with that?

Millions of voters over the next two months get to vote however their conscience tells them, with no fear that voting their conscience will prevent Hillary Clinton from being the Democratic nominee.

And the well over 40 percent of Democrats nationally who support Bernie Sanders will feel that their Party is listening to them -- enough to give them a meaningful place at the table when the Party platform is being hammered out in Philadelphia.

While there might, in this scenario, be a quiet clamor for Sanders to be nominated for Vice President on the first or second ballot -- whoever Clinton has herself chosen, especially if it's a moderate Clinton ally with little charisma or appeal to voters, like Virginia Senator Tim Kaine -- even this risk is minor. It's unlikely, however much Party functionaries might consider Sanders a better motivator for the base and independent voters than Kaine is, that enough would take this view for Sanders to end up Clinton's (perhaps unwilling on both sides) Vice President. More likely by leaps and bounds is that Sanders voters would simply feel validated by their candidate's performance -- winning more states; being ahead, by then, in national polling against Clinton; having won 20 of the last 25 states; performing better in all polling against Donald Trump; having a proven track record of appealing to independent voters while, according to polling, winning the same percentage of the nonwhite vote as Hillary Clinton in scenarios in which he, rather than she, is the Democratic nominee -- that they would accept significant changes to the Party party platform as recompense for Hillary Clinton being the Party's nominee. They might very well, in turn, cast their votes for Clinton in the fall en masse.

With Clinton and Trump currently statistically tied in the most recent polling, Clinton will need those Sanders votes come November -- so any scenario that makes those votes going for Clinton more likely seems only a boon to the Democratic Party.

Again, this is a serious proposal.

The Democratic primary race is over, as everyone now agrees.

And that means everyone is now free to vote for Bernie Sanders, should their heart -- or merely sympathy for any of the causes Sanders has championed -- compel them to do so.

Sanders can't harm Clinton any longer -- he's changed his tone and geared his campaign toward winning delegates rather than defeating Clinton outright for the nomination -- so a vote for Sanders is now a vote for both Clinton as the eventual nominee and any or all of the principles the Sanders campaign has advanced and will continue to advance.

A win-win for everybody.