Today we say goodbye to President Obama and soon to Obamacare. 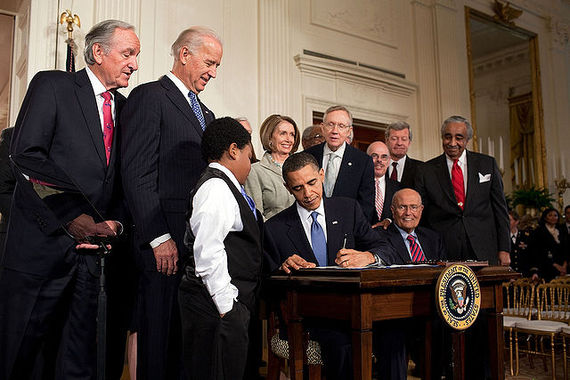 Eight years ago when the tumultuous healthcare reform journey began we could not have ever imagined the roller coaster ride it would take. The Affordable Care Act (aka Obamacare) passing without a single Republican vote, surviving the Supreme Court ruling by the vote of a Republican-appointed judge, a disastrous rollout of healthcare.gov, thriving for four years with the reelection of President Obama, and now its inevitable repeal with Donald Trump's election.

We need healthcare reform because our healthcare system in America is broken. Much like a stool with three broken legs, too many of us have high cost, low quality and difficult access.

The prime goals of ACA were to improve access and quality, by getting more people insured. To do this, the ACA put in place the following strategies:

Mandates: The most disliked part of the ACA was that it forced all Americans to buy health insurance, just as we have to buy car insurance, so as to have a healthy pool of people in the insurance mix. If we didn't buy insurance we had to pay a penalty.

Exchanges: This was a new marketplace to buy health insurance. Originally a conservative Heritage Foundation idea, it was adopted by the Democrats, and then shunned by the Republicans.

Preexisting conditions/Lifetime coverage: Before the ACA, insurance companies could deny insurance to a patient with HIV or diabetes or stop their coverage during a cancer treatment.

80:20 plan: Insurance companies had to spend 80 percent of the premiums for patient care or return the money.

Subsidies: Families who earn on average up to $80,000 and wanted to buy insurance would receive financial help from government.

Coverage up to age 26: Young adults could stay on their parents plan until age 26.

Medicaid Expansion: States, if they chose, could expand their Medicaid program for low-income people, with the help of significant additional federal funding.

Taxes on the rich: Those earning over $200,000 had to pay extra 0.9 percent Medicare taxes and 3.8 percent tax on investment income. This helped keep the Medicare Trust Fund solvent.

Fees on insurance companies and pharmaceuticals: They had to pay $10 to $20 billion in additional fees each year. This helped pay for the subsidies for working families to buy insurance.

While the 2700-page law had many other provisions, these had the greatest impact. According to a new poll, voters are deeply divided over the law, but only 20 percent support the Republican strategy of trying to repeal it quickly without a replacement.

Over the decade, one wonders why Obamacare was so disliked by half of America?
In part the Republican's branded the healthcare law as all that was wrong with our healthcare system. And in part the ACA failed to do what most Americans want - that is reduce the cost of healthcare.

Today, I believe, Americans and American businesses will sacrifice quality and even access (fewer people insured or less coverage for all) if only the premiums, the deductible, the drug prices and out of pocket health expenses cost would be lower or at the least stopped from rising to astronomical levels.

It is unclear what the replacement of ACA will be, but the pendulum needs to turn to cost containment with the hope of retaining many of the improved access and quality that Obamacare brought in it's brief time as a law. I believe, without doubt, Trumpcare or Ryancare plans will have the same fate as Obamacare, if they do not address healthcare cost.

So as Republicans in Congress and the White House work to redesign our healthcare system, it is important to know what an ideal healthcare system would look like: one which strives for low cost, high quality and easy access.

But from where we are today, most will be willing to sacrifice quality and access to reduce the cost of care to make healthcare affordable, ironically this is what the Affordable Care Act was not able to do.

Dr. Manoj Jain is a Tennessee doctor and his articles are on www.mjainmd.com