Secretary of State William Seward issued a statement verifying the ratification of the 13th Amendment to the U.S. Constitution making the end of slavery official eight months after the end of the Civil War.

"Neither slavery nor involuntary servitude, except as a punishment for crime whereof the party shall have been duly convicted, shall exist within the United States, or any place subject to their jurisdiction."

There were several debates about the exact language of the amendment in Congress. Some wanted it to include "provisions to prevent discrimination against blacks." However, the Senate Judiciary Committee provided the eventual language using the Northwest Ordinance of 1787 as inspiration.

President Lincoln is credited with advocating for the amendment and working to push it forward through Congress. He released the Emancipation Proclamation in 1863, stating “all persons held as slaves within any State, or designated part of a State, the people whereof shall then be in rebellion against the United States, shall be then, thenceforward, and forever free.” However, Lincoln knew that to legally end slavery, a constitutional amendment would need to be created.

The 13th Amendment passed in the Senate in April 1864, and the House in January of 1865. It was ratified by the necessary number of states by December 6, 1865 allowing the Secretary of State to officially ratify it on a national level a few days later. However, according to CBS News, the state of Mississippi did not ratify the amendment until February of this year, due to an "oversight." 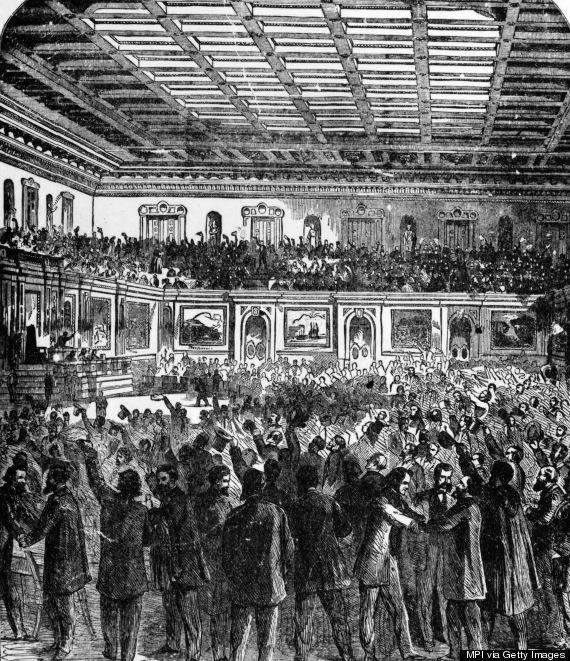 The House of Representatives celebrating the passage of the 13th Amendment to the U.S. Constitution which prohibited slavery.

PHOTO GALLERY
This Day In History