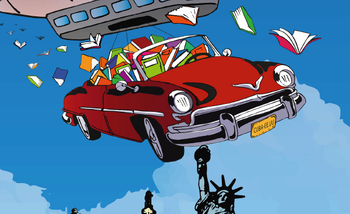 Imagine you're a Cuban author or publisher, and you don't have affordable access to the basic raw materials of bookmaking, such as paper and ink.

Imagine you're a Cuban publisher or self-published ebook author and you can't sell your book into the United States, the world's largest single book book market, and you can't work with American ebook distributors to reach the global market.

Imagine you're a Cuban reader and can't read the literary works of books published by American writers.

Imagine you're an American reader, and you're denied the opportunity to enjoy the rich literary treasures of Cuban writers.

This is the reality today thanks to the 50-plus year U.S. economic embargo against Cuba.

Last month, I joined a delegation of publishing industry representatives on a visit to Cuba to meet with our publishing counterparts in Havana. We witnessed first-hand how the embargo has wreaked havoc on Cuba, much to the detriment of Cuban writers, readers and publishers.

Upon our return to the U.S., I organized a committee to orchestrate an publishing industry petition calling on the US Congress and President Obama to end the book embargo against Cuba.

The petition, which will be featured on the front cover of Publishers Weekly the week of March 14, reads as follows:

END THE BOOK EMBARGO AGAINST CUBA

In February 2016, a delegation of approximately 40 American publishing industry representatives met with their publishing counterparts in Havana, Cuba. The two days of meetings, held with the support of the Cuban government, represented an historic milestone. Its purpose was to build bridges of understanding and explore opportunities for greater cultural and economic collaboration.

The American delegates included authors, publishers, distributors, literary agents, service providers, consultants, and independent booksellers. Cuba was represented by officials from the Cuban Book Institute, the Ministry of Culture and the Cuban Writers Association, as well as Cuban authors, publishers, academics, and students.

The undersigned companies and individuals - drawn from the American delegation as well as other leading U.S. publishing industry participants - hereby call upon the U.S. Congress and President Obama to lift the economic embargo against Cuba as it pertains to books and educational materials. This call is consistent with the will of the American people, who, according to a 2015 Gallup and Pew polls, overwhelmingly support the elimination of the U.S. trade embargo against Cuba.

"Access to books and literature is a fundamental human right. It's for this reason the California Writers Club, an organization representing over 2,000 writers, is proud to sign this important petition to end the book embargo against Cuba."
- David George
President, CWC.

Following the release of the industry petition, I posted a petition at Whitehouse.gov for the public to sign.

The Whitehouse.gov petition is nearly identical to the industry petition. It calls on President Obama to utilize executive powers to take immediate steps to eliminate the embargo as it pertains to books and educational materials.

President Obama visits Cuba March 21-22. On March 17, Obama will unveil new modifications to the embargo. Ask him to eliminate all trade and financial restrictions related to book production and commerce.

A longer version of the post, with additional background on the story behind the embargo, the politics of the embargo and the petition, first appeared at the Smashwords Blog.