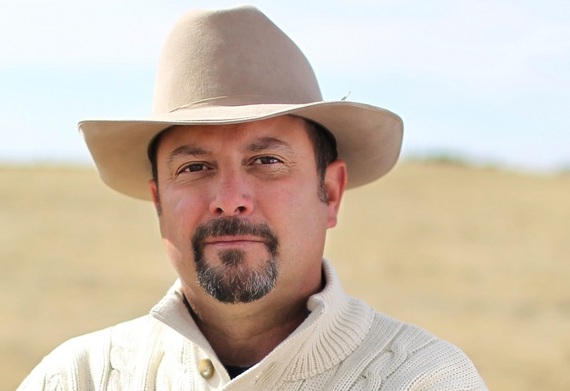 C. J. Box is the bestselling author of 16 Joe Pickett novels, four standalone novels, and a collection of short stories called Shots Fired. He's won multiple awards including the Edgar, the Anthony, the Gumshoe, and the Barry awards. He lives with his family outside Cheyenne, Wyoming.

Endangered begins with Wyoming game warden Joe Pickett learning his 18-year old adopted daughter, April, has disappeared. She's found in a ditch along a highway. April, the victim of blunt force trauma, is in a coma. It's uncertain if she will recover. Dallas Cates, the man April ran off with, denies any responsibility; and evidence begins pointing to another man. Joe cannot conceive of the danger he's about to encounter as he tries to unravel the mystery of what happened to April.

How and why did you begin writing fiction?
I always had an interest in writing. All through high school and college, I was associated with the student newspapers. My first job was working for a small weekly newspaper in Wyoming. That's when I really started thinking about writing fiction. My first novel, which later became Open Season, was hatched while I was a newspaper reporter, covering a story about creatures in Wyoming called black-footed ferrets. They were thought to have been extinct, but were discovered at that time. That story played out in a fascinating way, and I used it as the subject matter for my first book.

Who were your earliest reading influences as a youngster?
The first books I can remember reading were Encyclopedia Brown books, a series featuring a boy detective named Leroy Brown. I would go to my local library in Casper, Wyoming and the librarians would locate those books for me from all over the state. Later on, Catch-22 was one of the first huge books I ever read, and I loved it so much, I read it four times. Thomas McGuane is probably my favorite stylist as a writer.

I've learned that until recently, you had a day job, even though your Joe Picket novels have been bestsellers. Tell us about that.
My wife and I co-owned an international tourism marketing company. We had contracts with state government tourism departments in the West, and marketed five states in the Rocky Mountains to Europe and Australia. We had seven offices overseas. We were extensions of state tourism offices. We operated the business for 24 years, and I wrote fiction on a part-time basis.

At what point over those years, did you write and get your first novel published?
I was writing the entire time we worked in marketing. It took 20 years from my first conceiving a novel to having Open Season published. I hoped to have the novel published someday, but was busy running the business. It took five years after I'd completed the novel to get it published.

So you were no stranger to rejections?
I had some very weird experiences. My first agent had the manuscript--this was in the pre-Internet days. I sent him the entire printed manuscript by snail mail. He had it for four years, and said he couldn't sell it. I even stopped calling him since nothing was happening. I went to a writing conference and learned, to my astonishment, my agent had been dead for six months. I had no idea. To this very day, I've never met an editor who saw that original manuscript. So now, I tell people to make sure their agent is young and vibrant. Anyway, I got another agent and the book was sold very soon afterwards.

You've mentioned your "first readers" in Acknowledgments at the end of Endangered. You've also talked about them at an event last October. Tell us who they are and the role they play in your writing.
The first reader is my wife, Laurie. She's really a good editor and doesn't pull any punches. She does primarily conceptual editing and tells me where I may have gone astray. I bought my three daughters Kindles, so I could e-mail the manuscripts to them. They provide input, too. They're particularly good when it comes to commenting on child and girl characters. They keep me on track and will tell me something like, 'The kid wouldn't say it like that; she'd say it like this...' In one book, my youngest daughter straightened out the text-messaging I wrote. They also do continuity editing. They'll say, 'You used that phrase in the last book.' So, all told, the entire family participates and it's very valuable.

One can't help but notice Joe Pickett is married and has three daughters, as do you. Any similarities between you and Joe?
Not a lot, other than my having been a state employee for a while. I'm familiar with government bureaucracy and how difficult it is at times to do your job. I'm familiar writing about Joe's family situation, dealing with three daughters. (Laughter).

Joe Picket has been on the mystery-thriller scene for 16 books. How has he evolved over the years?
He's definitely evolved. Part of the reason is the books take place in real time. He gets a year older with each novel. He has a much harder view of things now than he did in the first books when he was kind of naïve. He's been in so many difficult situations and has experienced so many betrayals, he's become a bit more cynical as time has gone by. As a reader, I don't like when a series seems frozen in time. You've got to suspend disbelief for a series to work in the first place, but when a character doesn't age and change, it tips things over the top. It loses all credibility. I like the fact that everyone ages a year with each book, and reflects the experiences they had in the previous one.

What do you think makes Joe Picket so appealing even to people unfamiliar with life in the West?
I like to think it's his fallibility. He's a very real guy who makes mistakes. He's not a superman, by any means. His biggest attribute is tenacity. When he gets into something, he doesn't let it go. He's like a bulldog. But, he's also a family man and a state employee. Readers can relate to him, which makes him kind of unusual in the mystery genre.

I understand the Joe Pickett series may be adapted for television. Tell us about that.
There's a team of producers, including executive producer Robert Redford, trying to get a series on the air. It was almost done with CMT, but that fell through at the eleventh hour. They're still trying to find the right outlet for it.

You've been a successful novelist for years. What about the writing life has surprised you?
I think the biggest surprise has been the success of the Joe Pickett series. My wife and I have done well beyond our wildest dreams. My initial goal was just to get a book published that would be well-received in the Rocky Mountains. I sometimes marvel at the fact that people want to read what I write.

What do you love about the writing life?
I really enjoy the life. I love working with the people in publishing. They're intelligent and very literate. I enjoy meeting readers who are really into the books. As a writer, I'm something of an entrepreneur. I can create my own work habits, my own hours. I love writing the first draft of a novel. It's exhilarating.

What about writing that first draft do you love?
What I love about writing the first draft is that it's done with pure joy, and with all the creative juices flowing. Characters are coming alive and things are happening right in front of me. It must be like what a songwriter feels when a catchy hook comes into his head. He knows he must build a whole song around it, but that initial rush must be wonderful.

What about rewriting and revising?
Editing, revising, and copy-reading aren't nearly as much fun as writing the first draft. There's something inspirational about getting the basic story written.

If you could have dinner with five people from any walk of life, living or dead, who would they be?
I know I would want to sit down with Theodore Roosevelt. Another would be Joseph Heller. Then, I'd invite Raymond Chandler. Winston Churchill would be there. He had a strangely similar life path to Theodore Roosevelt's. And then, there would be the rodeo cowboy Bill Pickett. He's the man for whom Joe Pickett is named. He was the first all-around champion of the Cheyenne Frontier Days Rodeo.

What's coming next from C.J. Box?
Two things. In addition to the Joe Pickett series, I just signed a deal with producer David E. Kelley, who wants to create a TV series based on my standalone novels. And, at the end of July, I've got a standalone novel coming out called Badlands. The story takes place during the oil boom in North Dakota.