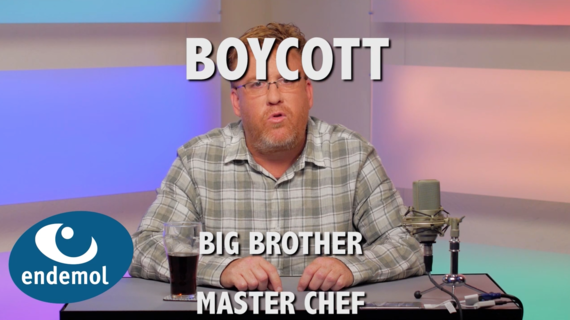 I've worked on quite a few... some you've liked (Politically Incorrect, Penn & Teller, Curb Your Enthusiasm)...and some no one liked, like The Late Late Show with Craig Kilborn. Yeah. Sorry 'bout that one.

Another part of my job is thinking up stuff would make a good TV show. You know on CSI: Miami when David Caruso takes off his sunglasses? My idea.

Another one of my ideas was a show called "My Dad Is Better Than Your Dad" - it was a competition show that was on NBC in 2008. 10 million people tuned into the premiere.

Anyway, after I thought up "My Dad", I had to sign a contract... my producing partners agreed to pay me for my idea, pay me to be in charge of the show and if they ever made more shows or some kind of variation of my show, they'd give me something for that, too. And not herpes. They were oddly specific about that. Weird, huh?

My daughter is watching TV and yells out, "Dad, look. There's a new show coming on that's just like your show."

And I said, "Not possible. Craig Kilborn is dead." And she said "No, the good one."

So I said: "I have contract. If they make a show similar to my show, they'll pay me to work on it. And not give me herpes. And since I didn't work on it, and they didn't call me... ipso facto, it can't be like my show."

She said: "Do me a favor, OK? You know these show-biz assholes. Just call. Ask them."

So I said: "Fine. I'll look into it." And then I reminded her that people in showbiz are honest, not assholes. Just like the people who run hedge funds and Chick Filet.

But, out of an abundance of caution... I asked my lawyer to get in touch with the creators of Bullseye - a new series then coming to FOX. A few days later, their lawyer sent me a note: "Bullseye has no connection to "My Dad is Better Than Your Dad."

Of course, I was thrilled... to throw that shit in my daughter's face. 10 year olds are so stupid.

But, she said "You had this game where people hung from a rope like 40 feet in the air... flew threw the sky, and then chucked a dart at a gigantic inflatable bullseye. And that's pretty much exactly what this other show does."

So, just to shut her up, I did a google search to prove that no one from Bullseye worked on my show.

Of course, I was right. There wasn't one person from Bullseye who worked on my show. (beat) There was 13.

And those 13 connections are just the first of many between Bullseye and My Dad Is Better Than Your Dad. There's a whole lot more. And the story gets uglier, too. It's a legal battle that's lasted more than 1 year, with no end in site.

The video below has all the details. Watch it now! Thanks.