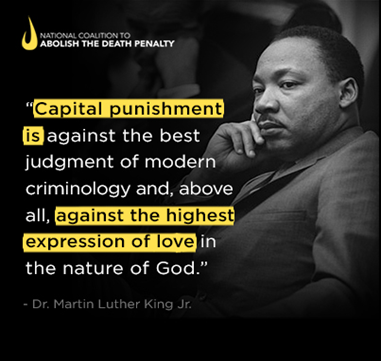 The holiday marking the birthday of Dr. Martin Luther King Jr. coincides with the beginning of legislative sessions in state capitals across the country. In a number of state capitals policymakers will consider whether the death penalty should continue as a feature of their justice systems. Support for capital punishment continues to decline as a recent report by the Death Penalty Information Center indicates. The more people learn about the death penalty in action, the less they like it.

Consequently as capital punishment laws come under closer scrutiny, we can expect to see significant progress away from the practice. While we will still have to grapple with the disturbing reality of legal systems that kill in a dwindling number of jurisdictions, overall the direction of our march is clear. However, this will not simply happen with the passage of time. It will require a greater level of engagement from the millions of people who now understand that it is time for capital punishment to end.

I am thinking about Dr. King and what he said about capital punishment:

If the reality of leading a prisoner from a cage to be killed is not equated with violence, some might miss how this statement relates to capital punishment. If we accept that finality trumps taking every possible precaution against a wrongful execution, we might miss the point. If we accept that racial disparities in death sentencing are inevitable and tolerable, as the Supreme Court has, we might not grasp that Dr. King's statement calls out executions in parts of Florida, Alabama, Ohio, Texas and Oklahoma.

There is nothing humane or nonviolent about executions. Just because we no longer read stories about prisoners being shot, gassed, strangled or burned to death in electric chairs does not mean that we have moved far from the mark. A recent example is the execution in Ohio where the state literally experimented with un-prescribed and untested drugs to send Dennis McGuire to his death gasping for air for 15 minutes or more. Earlier this month Michael Wilson was executed in Oklahoma. His last words were: "I feel my whole body burning".

These executions, days before public officials will rush to be seen paying tribute to Dr. King's dream, could well be another turning point against the death penalty.

We do know that the ugliness of images of young people being beaten, bitten by dogs and sprayed with fire hoses forced a reluctant public to accept that segregation and racial discrimination had to end.

Similarly, when confronted with the nitty-gritty dirty business of killing human beings as official government policy, I expect more will turn away still.

We simply cannot reconcile a commitment to advancing civil and human rights with the continuation of capital punishment. It undermines our standing with key allies in the world and places us among the recalcitrant stragglers on human rights and not among the leaders.

We can continue to learn from Dr. King and the civil right movement overall as we study the means by which they brought about extraordinary advancements in our culture and system of justice. The change they sought was bigger than any one person or organization. They needed a movement -- a groundswell of people from all walks of life. They had to be willing to stand and willing to answer time and again: Why you? Why this struggle? Why now?

Dr. King and those standing with him risked and some gave everything -- even their lives -- for their freedom and the freedom of others.

Different times -- but what if even a little of that hunger for justice informed our efforts today? What if we let our revulsion at the spectacle in Ohio and other states hastily and secretly devising more ways to kill propel us to action?

Dr. King's birthday is an excellent time to remember and get on doing the work.

Each of us individually and through our social networks, places of worship and political organizations must come together and be visible and engaged. We must use the full volume of our collective voices.

At the National Coalition to Abolish the Death Penalty our tribute to Dr. King is our commitment to building a broad, inclusive and engaged movement for ending capital punishment.

Every partnership we build and every new advocate that comes to this struggle is a hero in a victory that is likely but not assured. Our work is not finished until the last execution chamber is closed.

We launched a national petition urging Governor Kasich to impose a moratorium on executions in Ohio. This is one easy way to begin taking a stand.

Executive Director of the National Coalition to Abolish the Death Penalty